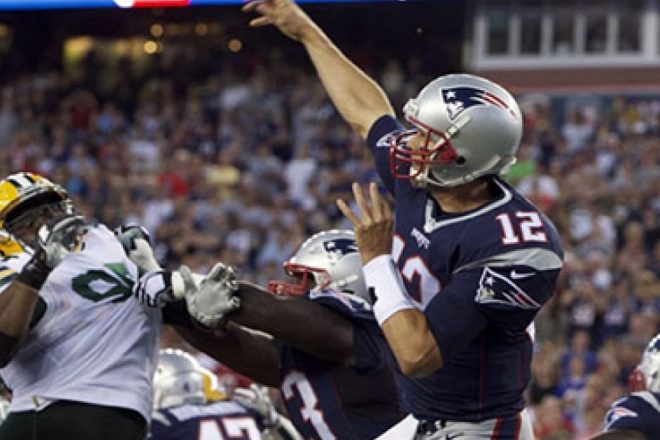 The theme was pretty clear on Wednesday as Bill Belichick spoke about the Jacksonville Jaguars, who are set to visit Gillette Stadium this weekend.

They’re young.  They’re hungry.  And his team needs to be ready to deal with a group that could create some problems for them.

“It’s a very talented team,” Belichick said on Wednesday.  “They’re young, they’re hungry, and they play very, very well. Their game last week against Miami I think was a carryover from a lot of what we saw in preseason – how efficient they were, the growth and maturity of their young players.”

Down in Jacksonville the Jaguars aren’t afraid of New England at all.  In fact, they’re pretty upbeat and excited about the opportunity to come up here and see how they measure up.  After upsetting the Dolphins Sunday, quarterback Blake Bortles is planning on taking the same approach he did against Miami and he’s confident in coming up to Foxboro and putting up another solid performance.  He completed 18-of-33 for 273 yards and two touchdowns Sunday during their first win of the season and he’s looking forward to the opportunity this week’s challenge brings.

“We’re going to face this game the same way we did Carolina and Miami,” said Bortles via First Coast News.

“We get an opportunity to go play again, it just so happens to be playing the world champions at their place so it’s awesome. I think it’s a cool opportunity. Guys are going to be excited about it but we’re going to go through this week and prepare and plan and take it on just like every other week.”

As a result, this is a very confident group coming in.  It’s always dangerous playing a team with nothing to lose and the biggest thing Belichick tried to emphasize was the fact they haven’t faced them since 2012 and a lot has changed.  The message he’s trying to drive home to his players?  Take the time and get to know them.

“Each of us individually, player and coach, has to prepare ourselves. I can’t do somebody else’s job, they can’t do my job. We all have to put that same time and effort and concentration into it and that’s what this team has to do.”

BILLS BLOWN AWAY BY BRADY:

Coming off of his massive performance, Tom Brady left his mark with the Bills Sunday and left them shaking their heads by the time it was over.

According to the Buffalo News, Brady’s lightening-quick release was the biggest thing that frustrated Buffalo, including Bills defensive end Marcell Dareus, who called it one of the toughest he’s ever faced.

“That’s hard as hell,” he said. “Fast as I’ve ever played against.”

However, Dareus admitted that despite Brady’s release, they’ll still have to plan on coming after him the next time they meet.

“You’ve got to keep coming,” Dareus said. “You can’t get flustered … Even if they get rid of the ball fast, you’ve still got to keep going because the next play, you might get a chance to get through there.”

The next time these two teams face each other isn’t until November, but Rex Ryan’s rematch will be on national television in a Monday Night game.  One would have to think it should be an interesting week.

BRADY CLOSING IN ON A RECORD, BELICHICK NOT INTERESTED:

Tom Brady is one touchdown away from 400 for his career, which he’ll have the opportunity to achieve in Foxboro against the Jaguars in front of the home crowd.  It’s certainly a special milestone, but Brady credits the players he’s had around him for getting to this point.

“You’ve got to have everyone block, and you’ve got to have everyone do their job and run the ball to set up opportunities like that. So, as long as we’re scoring points, I’m happy. I really don’t care whether we throw them in or hand it off or if it’s a defensive score. Just however we can score points and win games – that’s what matters to me. It’s always what’s mattered the most.”

As for how his coach feels, beating the Jaguars is the only thing he cares about and he dismissed the discussion.

“Look, Tom is a great player, we’ve all said that plenty of times, but I don’t really care about any records this week,” said Belichick.  “We really need to beat Jacksonville. Whatever our team needs to do to beat them, that’s what we need to do. Setting records – that’s a very, very low priority around here – other than winning – the winning record is what’s important.”

Belichick With Rare Praise of Gronkowski:

Belichick was asked about Rob Gronkowski’s leadership skills as a player and surprised everyone when he spoke quite candidly about the type of influence the veteran tight end has in the offense as a leader.

“Probably underrated,” said Belichick on Gronkowksi’s leadership skills.  “He hasn’t really sometimes come across in that role. You know, what I see, Rob’s very attentive, very coachable. You tell him what you want him to do, he works very hard to do it the way you want it done.”

One of the other things Belichick talked about was the fact that it’s obvious how talented he is as a player, but it’s just the overall way he goes about his job both in preparation and his constant work ethic that impresses his coach the most.

“His work ethic, his ability to work with his teammates, whether it’s the quarterback, the offensive tackles, the other tight ends or even with the defensive players is good. He’s a great guy to have on the team. Forget about the talent and all that, but just as the way he goes about his job, the way he works, trains in the weight room, his physical conditioning, his mental concentration and focus and desire to do well and improve, I mean, very, very good.”

Patriots offensive lineman Ryan Wendell was missing on Wednesday during Patriots practice as he continues battling his way back from an undisclosed injury.

Wendell had been listed with an illness last Wednesday and was limited, but then missed Thursday and Friday before being later ruled “out” for Sunday’s game.

Meanwhile, defensive tackle Dominique Easley was out on the practice field again Wednesday, which is encouraging news as he continues working his way back from the hip injury he suffered in Week 1.  He had been listed as doubtful for last week’s game but was later downgraded to out Saturday.

According to reports, right tackle Sebastian Vollmer was spotted with his hand wrapped following the finger injury he suffered Sunday out in Buffalo and all indications seem to point to him potentially being out there on Sunday.