7 years ago at 6:30 am ET
Follow @SteveB7SFG
Posted Under: Patriots Commentary

The Patriots were victorious in their much ballyhooed duel with the Bills on Sunday in Buffalo. After hearing about the fearsome Bills defense and pass rush in the week prior, Tom Brady calmly eviscerated the Buffalo secondary as he’s done so many times before.

Brady orchestrated the Pats offense to near perfection on Sunday passing for 466 yards, three touchdowns as the New England offense put up 40 points on Rex Ryan’s defense. Perhaps the scariest thought of all for Ryan on Monday when looking at the film is that Brady and Co. left plenty of plays on the field and there were a lot more points that could have been scored.

We’ll take a final look at some of the key plays on Sunday before we move on to Jacksonville. Using the NFL Game Pass’ All-22 coaches’ film, we get a good look at the plays and how they developed.

Gronkowski 36-Yard Pass From Brady: The play that really set the tone for the day was the first quarter pass from Brady to Gronkowski that went for 36 yards. The Patriots lined up going with an empty backfield and five wide receivers, spreading out the Bills defense at the Buffalo 46-yard line. 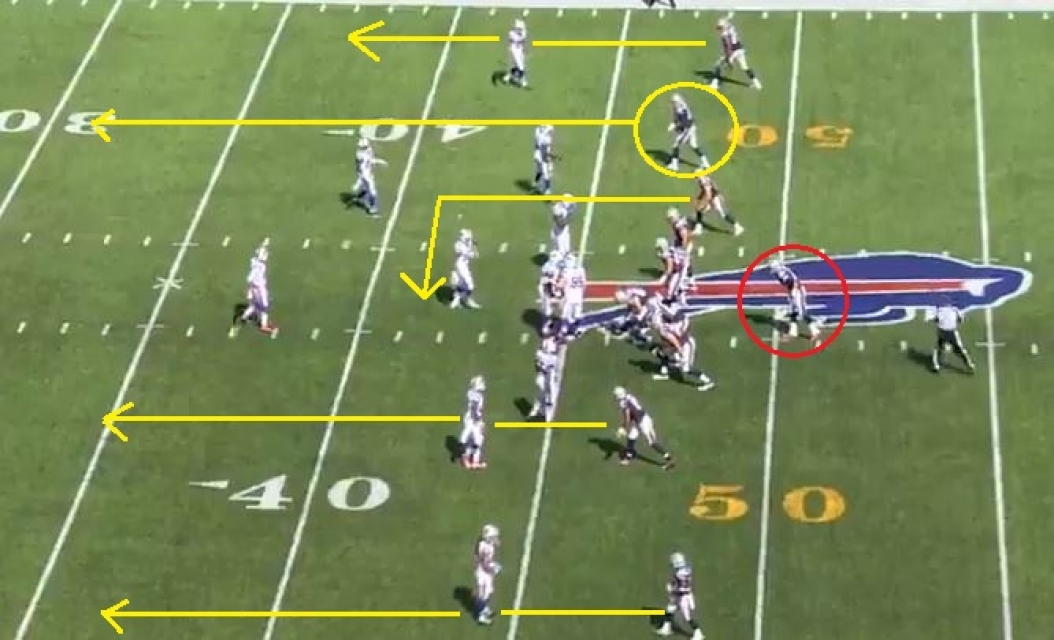 Brady was in the shotgun, Gronkowski was aligned inside of fellow TE Michael Williams on the right side at the numbers. He runs a deep route right down the seam and Brady has a very clean pocket and with no one near him is able to step up and fire a laser downfield to Gronk, who has a step on CB Ronald Darby. Gronk hauls it in and the Patriots are in business at the 10-yard line. 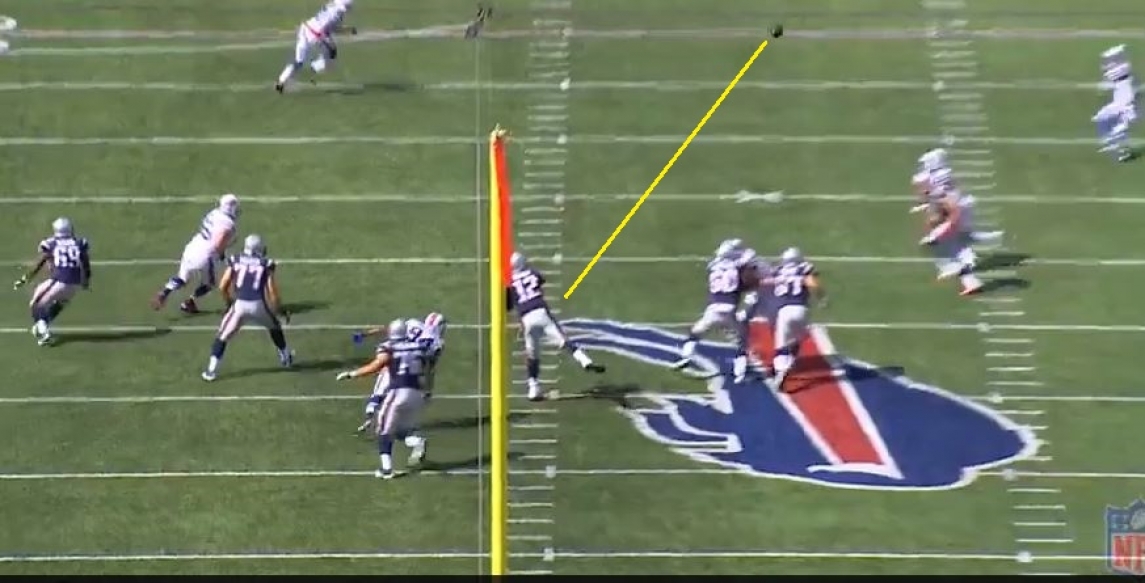 Julian Edelman 9-Yard TD: Later in the same drive the Patriots are at the nine yard line. The Patriots go 4-wide with Dion Lewis in the backfield next to Brady. Edelman is aligned in the right slot, Gronkowski is wide right with Dobson and Amendola split to the left. 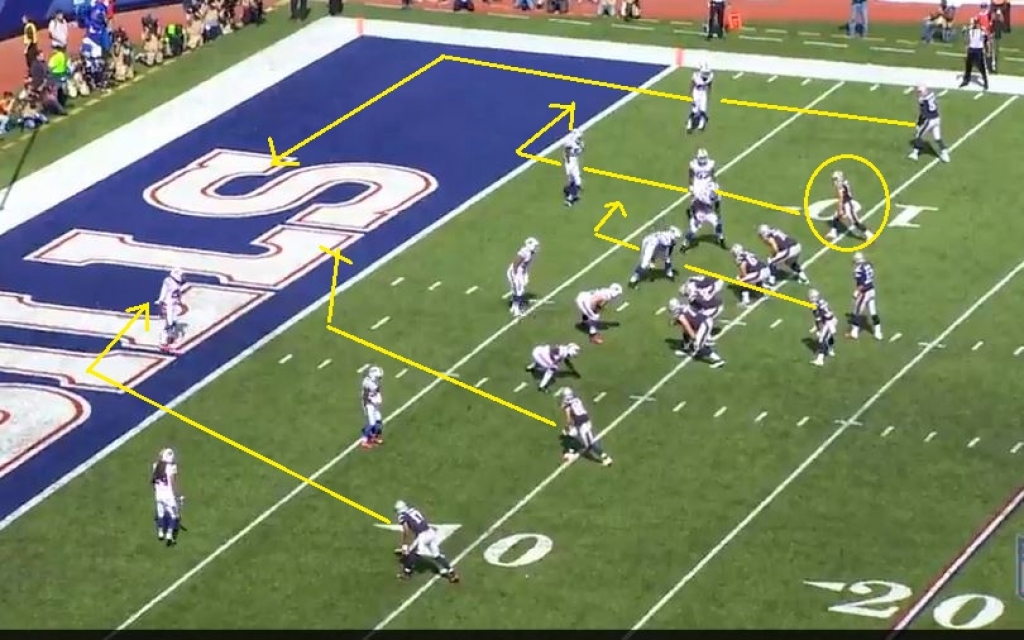 At the snap, Gronkowski runs a deep crossing pattern along the back of the end zone. Edelman fakes inside and is wide open with Aaron Williams covering, running to the right along the goal line. Lewis runs out in the right flat and is also open on a shorter route. Brady is able to step up again and the result is an easy pitch and catch for a touchdown. 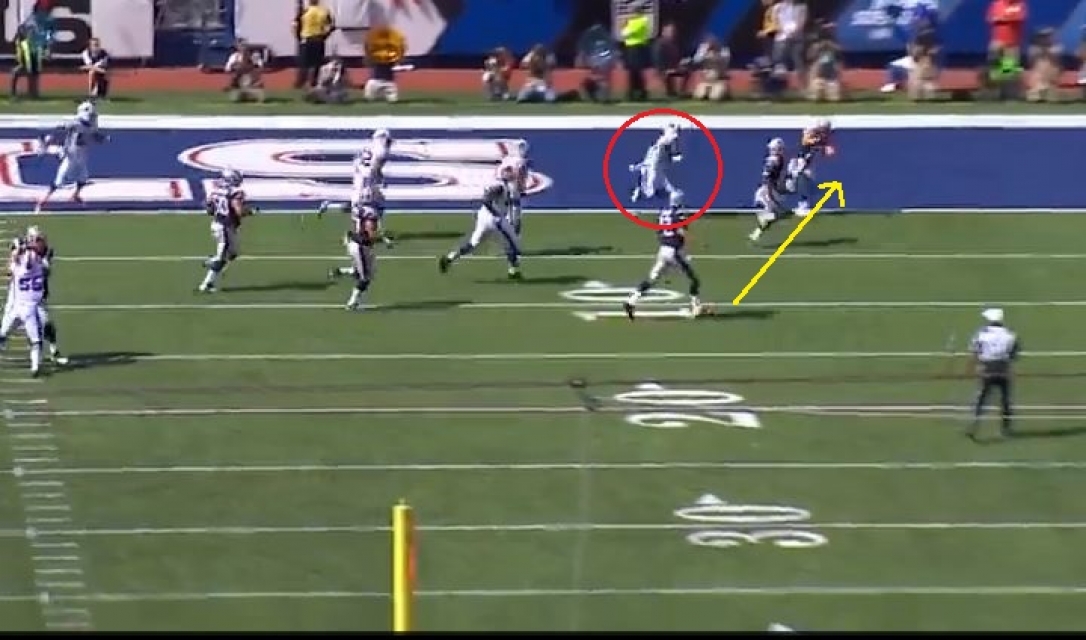 Dion Lewis 6-Yard Touchdown: One interesting note on Sunday’s game was that the Patriots didn’t attempt a run until Lewis’ touchdown. Although Ryan bristled in his post-game press conference that he still doesn’t know Lewis’ name, perhaps he should. Lewis racked up 138 yards of offense with 40 yards rushing on six carries including this touchdown and 98 yards receiving. He forced eight missed tackles again, making it 16 on the season already and is becoming a key component of the offense.

On his touchdown run, the Patriots had two wide receivers split left with Dobson out wide and Edelman in the slot. Gronkowski and Scott Chandler were lined up in-line to the right side. 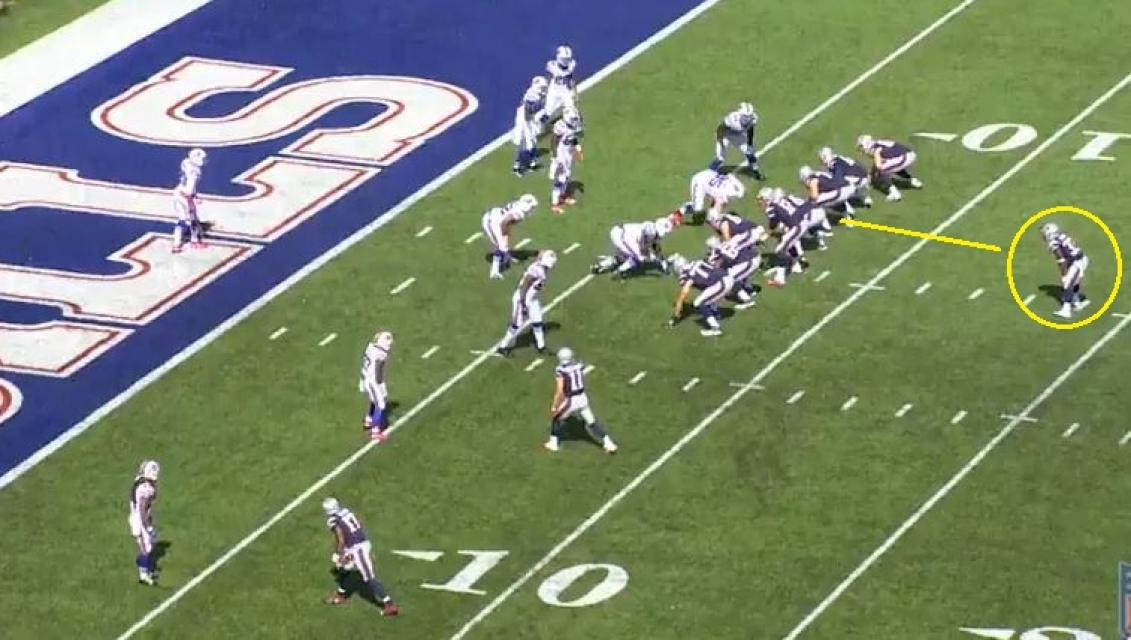 Lewis took a handoff from Brady and was attempting to go straight up the middle, which was blocked. But Gronkowski made a terrific block, sealing Mario Williams on the right side and Lewis was able to bounce right thru the hole and carried the pile into the end zone. As much as we rave (and rightfully so), about Gronkowski’s receiving capabilities, he’s a devastating blocker and this play shows why he’s the best overall tight end in the business….and it isn’t even close. 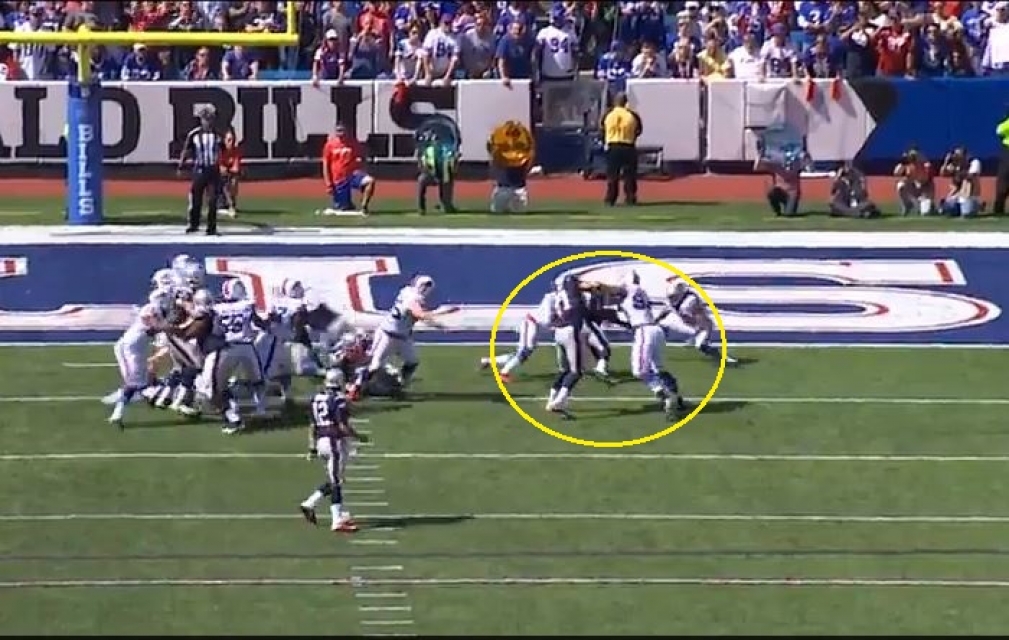 Gronkowski 2-Yard Touchdown: Later in the first half, the Patriots are set up on the Bills 2-yard line. Gronkowski is aligned wide to the left with Edelman in the slot. Aaron Dobson is lined up wide right, with TE Michael Williams inline on the right side. Running back LaGarrette Blount is the lone back with Brady. 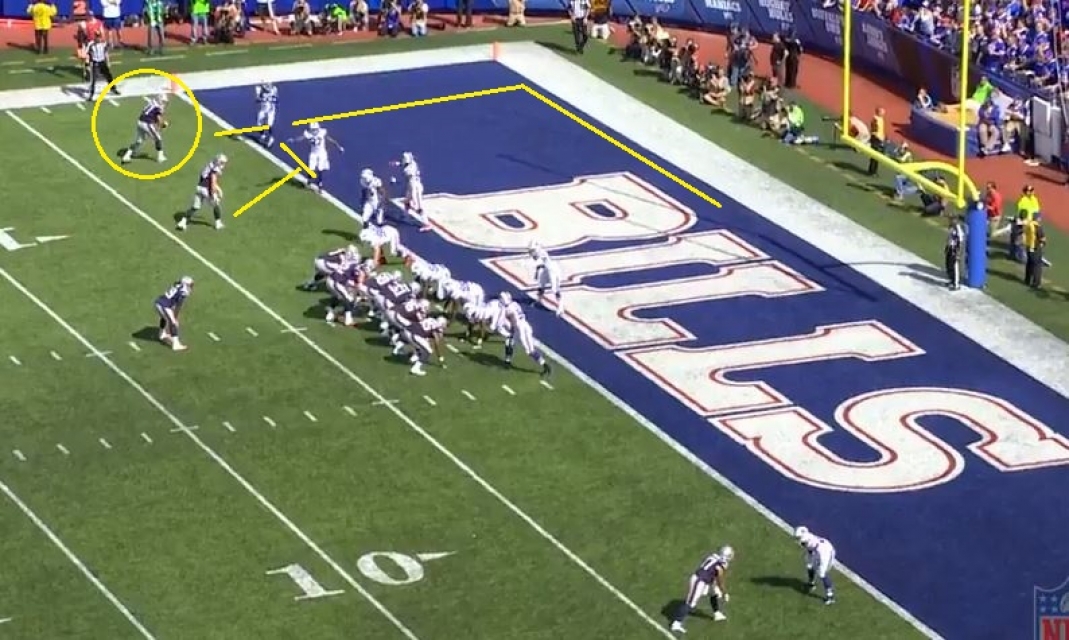 The Bills defense was in disarray, no one knows who is supposed to cover Gronkowski. Edelman runs a stop route right over the goal line, while Gronk runs a deep crossing pattern to the right along the back of the end zone. Again, he beats the coverage easily and Brady has an easy toss for the touchdown. 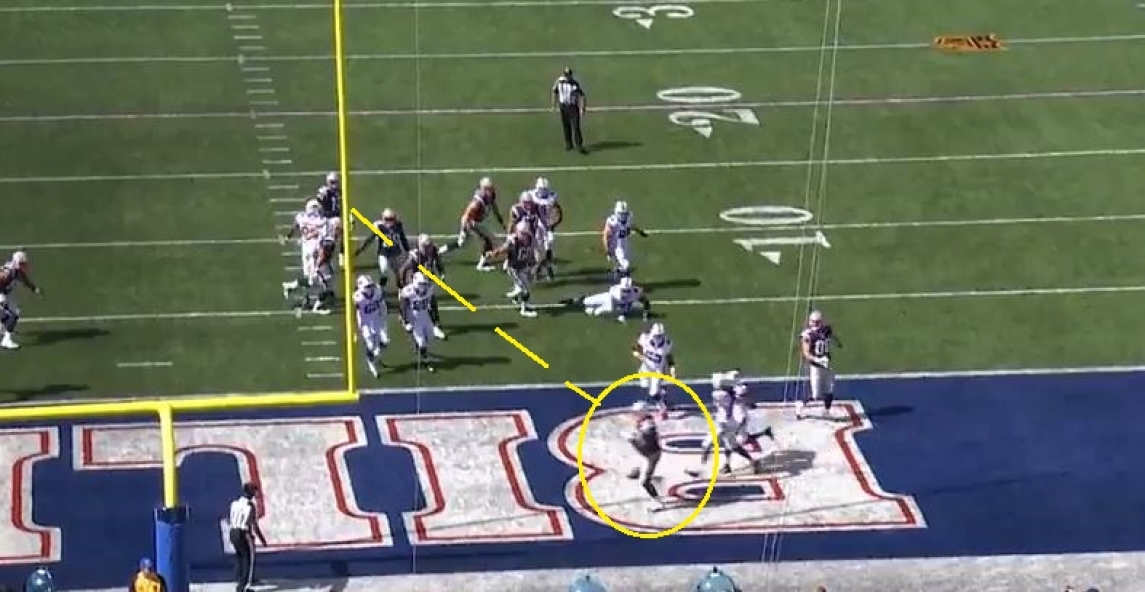 Danny Amendola 29-Yard Catch: The play that sealed the game came late in the fourth quarter. With the Patriots on the Bills 46-yard line, Aaron Dobson is lined up wide left, with Amendola in the slot. Gronk is lined up wide right, with Williams inline on the right, Edelman in the slot right. Brady is in the shotgun with a lone setback. 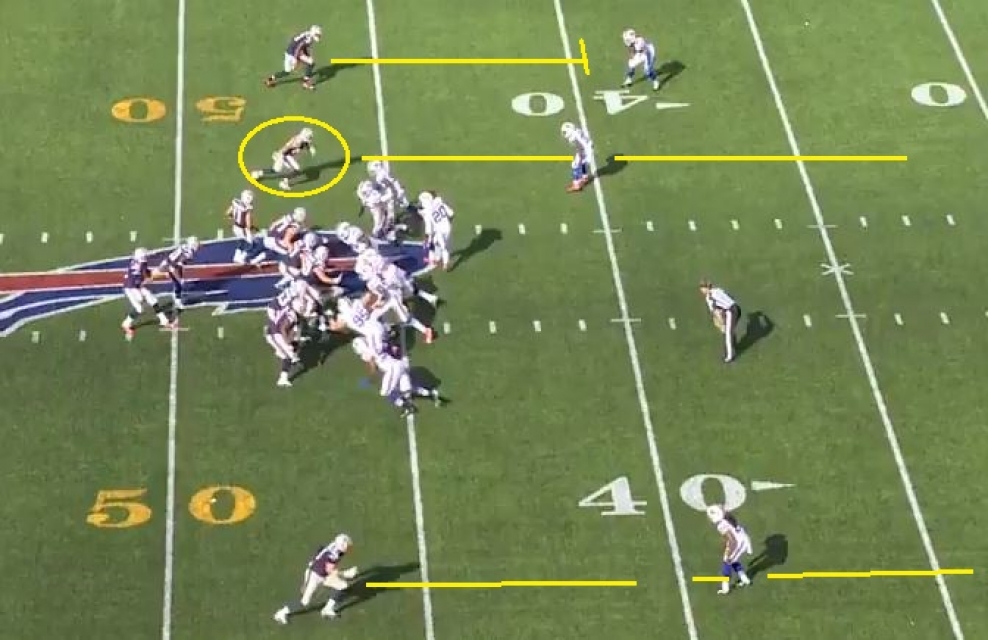 Julian Edelman shifts to the left as Brady recognized a safety blitz was coming. Brady positions him perfectly to pick it up. Dobson runs an 8-yard stop route while Amendola runs straight down the numbers on the seam. The coverage is tight but Amendola is able to leap up and make a fantastic catch, coming down with the ball at the Bills 17-yard line. The play setup the final field goal of the day. 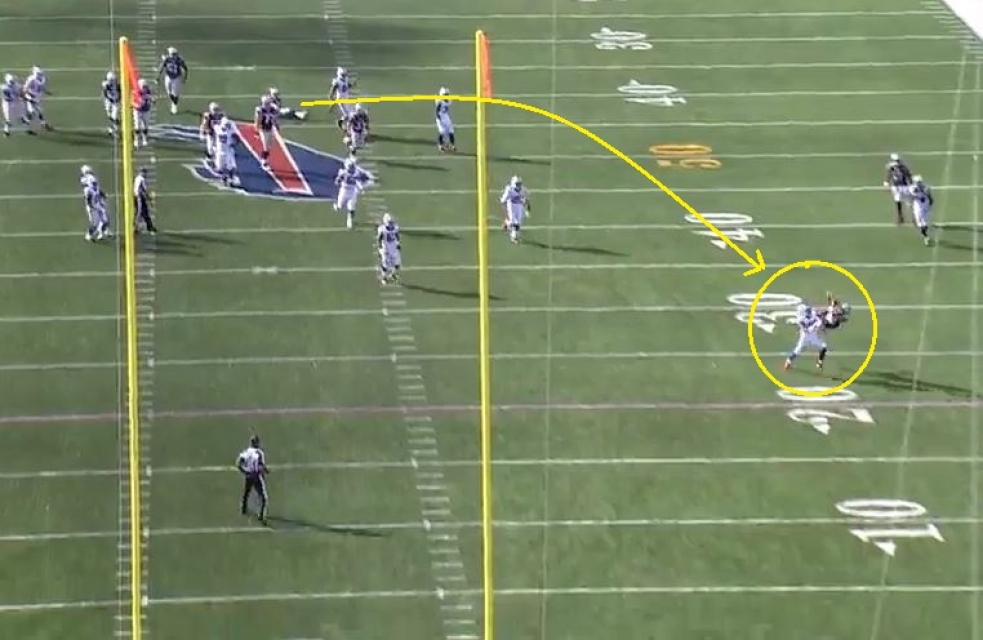 The Patriots offense, as good as it was on Sunday against a very good defense, can still get better, the running game for the first two weeks has been an afterthought. Brady missed a couple of throws, (wide open Julian Edelman on 4th and 1), and the receivers had six drops on the day. Brandon LaFell is still on PUP and Scott Chandler hasn’t gotten utilized yet as much as they’d like to.

It is going to be interesting to see how they continue to evolve as the season progresses. Usually the offense starts a little slow and gains momentum as the year goes on. Look back to where the offense was after two weeks in 2014 and the contrast is startling.

We’re on to Jacksonville…