7 years ago at 8:27 am ET
Follow @SteveB7SFG
Posted Under: Patriots Commentary 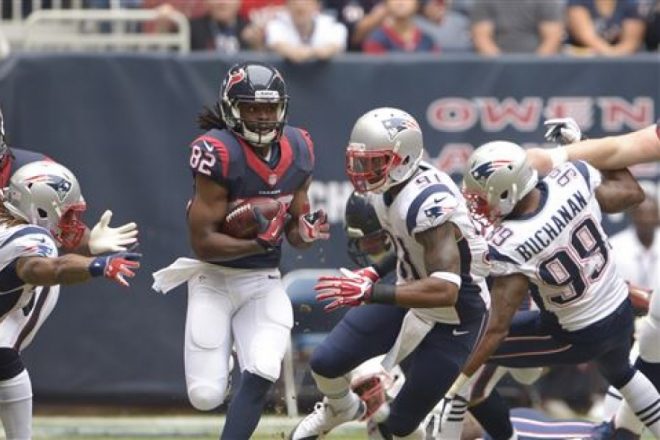 The Patriots made a trade with the Houston Texans this week adding KR/WR Keshawn Martin plus a 6th round draft choice for the Patriots 5th round selection in the 2016 NFL Draft.

The trade was similar to the deals that netted the Patriots both Jonathan Casillas and Akeem Ayers last season. Both played key roles in the Patriots’ success down the stretch and into the playoffs.

The Texans and Bill O’Brien are receiver rich and in dealing Martin, increased their draft position for next season. The Patriots are thin at WR and Martin gives them a possible fit there but also increases their depth in the return game, giving them a proven commodity.

Martin has returned 86 punts for 766 yards in his career for an 8.90 average including a touchdown. He’s also returned 68 kickoffs for 1707 yards good for a 25.1 average. For now at least, he’ll be focusing on his kickoff and punt return duties.

Kickoffs seem his best fit and he can back up both Julian Edelman and Danny Amendola in the punt return game. He posted excellent times in the 40 (4.45) and the all-important Three Cone Drill (6.85) at the NFL Combine in 2012. He has speed and quickness.

The Patriots scouted Martin when he left Michigan State for the 2012 NFL Draft and he made a visit to Foxboro. The 5’11, 194 pound wide receiver did catch 38 passes for the Texans in his time with Houston with his best year in 2013 where he had 22 receptions for 253 yards and two touchdowns. He can play outside or in the slot.

“He has some experience. He’s played, I’d say, multiple positions in an offense similar to ours – inside, outside, returned kickoffs,” Belichick said. “He’s had some involvement in the kicking game, so we’ll see how it goes.”

What makes this an intriguing signing is that Martin shouldn’t have a steep learning curve that many wide receivers do in learning the intricate Patriots passing offense. O’Brien installed a similar system with the Texans after being the Patriots offensive coordinator and Martin said after practice with the Pats that both systems are close. But for Belichick, as usual, he’s keeping things close to his vest.

“Well, I mean, we’ll see,” Belichick said. “We got pretty good production from our [kick] returners, our punt returners, and we’ll see how it goes. He returned kickoffs well against us, whatever it was, a couple years ago and in other games as we got ready for him. I know he hasn’t done as much of that lately, but we’ll see.”

This signing is an underrated one since the team gave up little (5th Round pick) and got Martin and a 6th round pick in return. He should boost the kickoff return game immediately and with nearly 2500 yards of returns in his career, he has plenty of experience.  And may just work his way into the rotation at wide receiver, of course there’s that little matter of the trust factor with Tom Brady…but this was a good low-risk, high reward trade for the team.