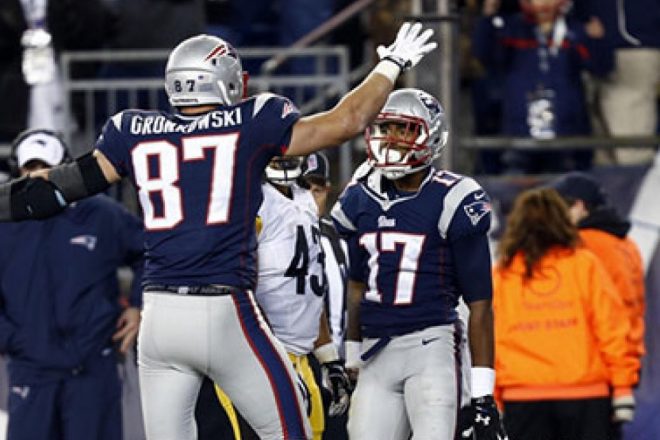 Quick programming note, this column will be here each morning by 6:00am throughout the 2015 season with a daily round-up of news, notes and commentary. So be sure and check back each day before you head off to work, and also share this with your friends on social media and help spread the word. You can also find us online at 1063FrankFM.com in New Hampshire.

One of the benefits of winning the Super Bowl is being able to open the next season in front of the home crowd on national television and for a player who’s in a contract season, things couldn’t have worked out better for wide receiver Aaron Dobson.

After all, Dobson is about to face a team that he had his best career outing against, with the then-rookie receiver catching five passes for 130 yards along with two touchdowns, one of which went for 81-yards during New England’s 55-31 win over the Steelers back on November 3, 2013.

Dobson missed two games with a hamstring injury this preseason but played in the final two and performed well, catching six passes for 107 yards while averaging 17.8 yards per reception, the most of any other receiver who caught more than one pass.  He also had the longest reception of any other receiver, which went for 40-yards during the team’s 17-16 win over the Panthers.

He’s still had his ups and downs this preseason, but he’s continued to work hard and despite some rough patches Dobson has clearly shown enough to prove to the coaches that he can still live up to the expectations this team had when they took him in the second round back in 2013.

It’s been a frustrating road for a player who was tremendous at Marshall. After a solid rookie campaign, Dobson’s career has since stalled after a foot injury toward the end of his first season kept him from being able to do much the following offseason, with the injury ultimately requiring surgery. By the time that decision was made, it sabotaged an opportunity to get healthy by the time the 2014 regular season began and he was never to get himself right, ending up on injured reserve following an apparent hamstring injury he sustained against Green Bay.

Now that he’s a year removed from all that, Dobson spent this offseason working hard training out in Arizona and has looked like a different player, moving smoothly in his routes with plenty of control and precision. It wasn’t all perfect by any means during the preseason, but the 6’3″ receiver potentially gives the Patriots a big bodied receiver with a lot of speed and size and this is a stronger group than he played with the last time he was fully healthy as a rookie. That could definitely open up some terrific opportunities for him to shine, and potentially set him up for a terrific year.

Still, he’ll have to prove it on the field. The third-year receiver has heard the doubters and the people questioning whether or not he can be an NFL receiver, but all he cares about right now is going out there and trying to pick up where he left off during his rookie season.

“People are going to say what they’re going to say. I can only control what I can control,” he told the Boston Herald recently. “I can go out there, play hard, play fast, help my teammates and just progress as a receiver and a player.”

He should have a pretty good opportunity to do it again Thursday night.

STEELERS CLAIM TO HAVE ANSWERS FOR GRONKOWSKI:

The Steelers are talking tough this week about stopping Patriots tight end Rob Gronkowski, but if they’re actually able to slow him down, it would certainly be a first considering his history against them. 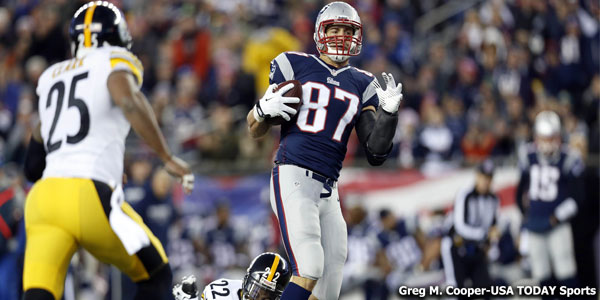 Gronkowski has played well in each of his career outings against Pittsburgh, averaging over 70 yards a game and has caught a touchdown in two out of his three battles against them:

Linebacker Ryan Shazier told ESPN that the veteran tight end does well “when people don’t put their hands on him” and they plan on making sure Gronkowski has a rough time breaking free.

Gronkowski isn’t one to shy away from contact, but the problem for Pittsburgh is he’s an athletic player that the Patriots also love to move around and split out.  If he gets matched up one-on-one against a linebacker, he usually ends up with the advantage, and Tom Brady loves looking for that type of mismatch.  As a matter of fact, former Steelers safety Anthony Smith also once talked a little trash before a game after guaranteeing victory leading up to their match-up, only to have Brady torch him for two touchdowns in a win over the Steelers back in 2007.

Bill Belichick, who is never one to get involved in those situations, even went so far as to say after that game, “We’ve played against a lot better safeties than him, I’ll tell you.”

Smith was in just his second season back then and his career was ultimately short-lived.  He was out of the NFL by the age of 28.  Meanwhile, Brady is 38 and continues marching on.

Needless to say if history is any indication it should be interesting to see what happens should Gronkowski and Shazier face off.  Pittsburgh has never had much luck stopping him before and you can bet Gronkowski now has a little more motivation to go out and play well Thursday night.

When Kenbrell Thompkins was cut out in Oakland, given the amount of injuries the Patriots were dealing at receiver after losing both Brian Tyms and Brandon Gibson to season-ending injuries in the preseason, the timing appeared perfect for both sides for a potential reunion.  Now that we’ve learned Brandon LaFell will start 2015 on the PUP list, Thompkins’ addition to the practice squad gives them a quality player who had the benefit of playing elsewhere for a season and likely has a new sense of purpose now that he’s back with the team who first gave him an opportunity to begin with. 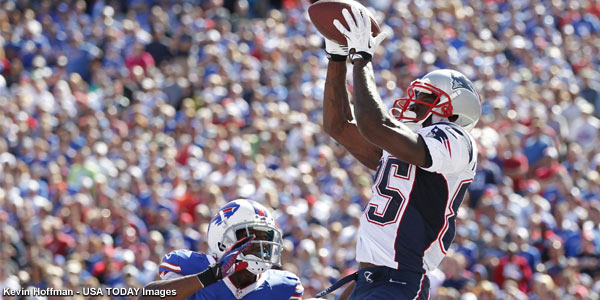 The former undrafted free agent back in 2013 has already done enough to get Belichick’s attention, with the Patriots coach telling reporters that in just the short time he’s seen him, he looks like a player who may push for playing time on the active roster.

“We’ll see how long it takes, but it shouldn’t be too long from a relearning standpoint,” said Belichick of the third-year receiver. “He’s a good learner, but to just get back in to what we’re doing and all that, to be able to compete for playing time based on where he was here before. And it looks like, based on a short look yesterday, it looks like he still has good skills to contribute. He’s got the experience to play in the slot, which he did more in Oakland than he did here. He’s kind of developed some versatility, so we’ll see how it goes. But I think we’re happy to have him and a player of his caliber in that position.”

We haven’t seen much of Bryan Stork since the second-year center suffered a concussion during the preseason and while all signs had pointed to a possible return this week, things appear to have potentially taken a turn for the worse.

The former FSU Seminole was present for the start of Saturday’s practice but has missed the last two days, leaving his status for the season-opener against the Steelers in question.

If he can’t go, that may shift the responsibility over to either undrafted rookie David Andrews or Ryan Wendell, although Andrews might be a player to watch as he saw a sizable amount of reps during the preseason and handled himself fairly well.

But either way Stork’s situation will remain one to monitor as he played well last season and was a key part of the Patriots’ success up front both running the football and in the passing game.

Another player who garnered a little praise from Belichick Monday was Dion Lewis, who came on strong toward the end of the preseason and played well enough to earn his way onto the roster.

He’s a player who has had a rough road.  He was a fifth round pick for the Eagles back in 2011, and lasted two seasons there before being traded to the Browns in Cleveland.  That change didn’t work out too well after he fractured his fibula in 2013, which also caused ligament damage, in a preseason game that cost him that season.  He returned to Cleveland the following year but was ultimately cut, only to get picked up by the Colts and then was let go again.

That made him a spectator last season.  Now he’s landed in New England and seems poised to bounce back and is wearing a good number, Kevin Faulk’s old #33, and during the preseason he certainly played the part.

“Yeah, he’s done a good job. He’s picked things up well,” said Belichick. “He’s been healthy for the most part other than one week there in training camp. But he’s been out, he’s gotten a lot of work in and that’s been good for a guy who missed the season last year. He’s done a good job. I like him.”

That’s quite the endorsement.  Now all he has to do is build off of it and he certainly looks like a player who could be a solid third down back in this offense.  That’s good news, because the Patriots are in need of someone to fill that role.  As a result, this could hopefully be just the opportunity Lewis needed.

According to multiple reports offensive lineman Cameron Fleming is returning to the Patriots on their practice squad after clearing waivers following his release on Sunday. To make room for Fleming the team has reportedly released Xzavier Dickson … The Patriots posted some interesting facts on their site on Monday, and listed some things you may not have known about the players on their roster: Oldest: Tom Brady (38), Youngest: Malcom Brown (21), Tallest: Sebastian Vollmer and Nate Solder: 6’8″, Shortest: Dion Lewis: 5’8″, Heaviest: Alan Branch (350), Lightest: Chris Harper (185) … We mentioned Ryan Wendell earlier, but Belichick made an interesting comment about how helpful he was even while he was sidelined during training camp in terms of helping younger players. “Ryan has really done a good job for us,” said Belichick. “This is a situation for guys like him, Dane Fletcher, [Brandon] LaFell, where they haven’t been able to do a lot on the field, until recently for Wendy, but they’ve done a lot off the field for us, in terms of helping younger guys, I don’t want to say help coach, but being there to help work with guys during practice as well as in the meetings and extra time. Wendy has been great. He’s been great.” … We’ll leave you with this. Ever wonder what life might have been like for Julian Edelman had he not made football his career? Check out the video below to see him as a car salesperson:

By: Mark Morse
| 2021 Patriots Offseason
While waiting for the Rookie Camp this weekend, I thought I would put out an early roster projection
3 days ago

James White Earns College Degree From The University of Wisconsin, Fulfills Promise To His Parents

By: Robert Alvarez
| Patriots News
James White completes his college degree from The University of Wisconsin, pays tribute to his parents for inspiring him to go back.
4 days ago