7 years ago at 6:40 am ET
Follow @SteveB7SFG
Posted Under: Patriots Commentary 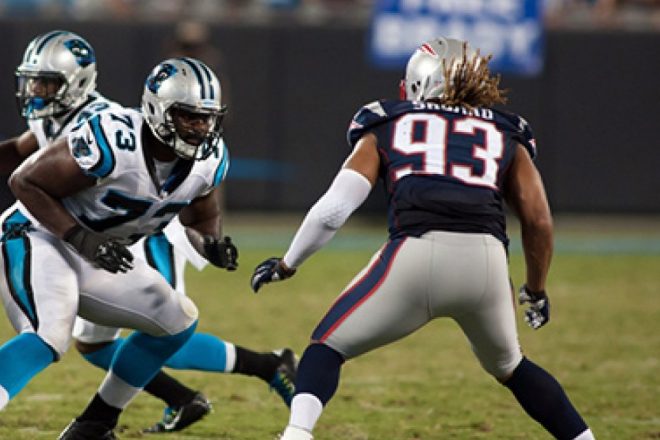 Bill Belichick during his daily press conference was asked yesterday about the addition of Jabaal Sheard to the rotation of Rob Ninkovich and Chandler Jones to the defensive end position and how it will add to the pass rush.

But Belichick in his answer alluded to not only Sheard but other end of the line players as well and the versatility that they all bring to the table will make the Patriots pass rush in 2015 a very different, more effective unit than we’ve seen here in the recent past.

During the draft in May the team added two impressive pieces in Geneo Grissom and Trey Flowers. Each can move around and play different positions not only on the edge but slide inside or play standing up as an outside linebacker.

“I think they’re all a little bit the same position, they play at the end of the line, but they’re all a little different because they can do other things besides that, so that gives them the added value,” Belichick said. “It also gives our defense more versatility. Whether that’s moving to inside positions or it’s moving to off-the-line or outside positions. “It’s great to be good at one thing, it’s also great to have flexibility and versatility from those players who have been helping us in other areas.” He also mentioned the GB game of last season where Ninkovich helped in the kicking game, filling in as a long snapper.

He also mentioned end of the line players from earlier teams such as Mike Vrabel and Willie McGinest and how their versatility was a recipe for success.

This creates options for Belichick and the Pats pass rush; in a perfect world you’re biggest problems are finding ways to getting all of your most talented players on the field at the same time. So Sheard, Ninkovich and Jones, who’ve all been effective edge rushers this summer, will also find some help from the rookies as well.

Flowers in particular was off to a great start in training camp, getting a lot of reps with the top unit and being very impressive. He followed that up with a nice start in the first preseason game with a sack of Aaron Rodgers before suffering a concussion in that game.

Now completely healthy, he’s ready to contribute again and will add to the Patriots options. He spoke with the media in the locker room briefly on Tuesday and you can see a short clip of this here:

“It’s hard to play three guys on the end of the line. We only have two ends of the line. So, finding something for that third guy, where you have the potential to have all three on the field at the same time, or more … which I’d say there have been cases where we’ve had multiple defensive end types, if you will, doing different things, then that creates flexibility, and it can change the look for the offense a little bit, too, with the type of athletes those guys are,” Belichick said.

Another move the Patriots have been experimenting with in different packages has been to moving last season’s first round draft pick Dominique Easley out to defensive end and his explosive first step is starting to come back after knee woes limited him in his rookie campaign.

The Patriots pass rush last season was boosted by A-gap pressure from both Dont’a Hightower and Jamie Collins and those two players will be again counted upon to blitz on occasion and overload the middle which doesn’t allow a quarterback to step up in the pocket. That in turn makes the edge rushers that much more effective.

And this group has all the makings of a very effective unit in 2015. The days of Jones and Ninkovich being forced to play over 90 percent of the snaps is gone. And playing less will ultimately make their production go up not down.

Belichick has placed Jones, Ninkovich and Sheard on the field at the same time with Easley a few times this summer in a Giants-type NASCAR package which Patriots fans remember well. Adding Grissom and Flowers to the mix makes it even more exciting to watch this season.

With the loss of Darrelle Revis, Brandon Browner and Kyle Arrington from the Super Bowl winning secondary, changes had to be made to the defense. And as Belichick has always said, defense is the pass rush and coverage working hand-in-hand. While Malcolm Butler and Tarel Brown may not be the shut-down corners from 2014, the pass rush should be much improved.

Next Thursday night when the Steelers come to town will be the first big test.