7 years ago at 9:13 am ET
Follow @IanLogue
Posted Under: Patriots Commentary 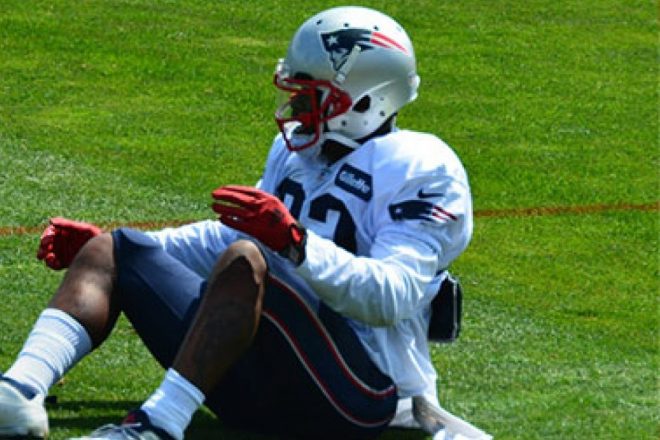 Four AFC East websites get together each week to discuss the AFC East. This week we discuss one player for each team in the division that made a big step up in each team’s preseason opener and one player that fell hard to start the preseason. See what Matt Barbato ofNew York Jet Fuel, Ian Logue of PatsFans.com, Steve Saslow of Bills Daily, and Luis Sung of Phin Maniacs has to say right here.

Steve Saslow (@BillsDaily): The Bill who’s stock not only went up but skyrocketed in the opening preseason loss to Carolina is Tyrod Taylor. He ran with the twos and scored touchdowns on his first two possessions. He completed 5 of 8 passes for 49 yards but two of the incompletions were drops. He added 47 yards on six carries and led a 90 yard scoring march. He showed incredible talent with his feet as he showed off his speed and his ability to throw on the run.

He now is working with the ones this week and if he has a similar outing against Cleveland in joint practices this week and in Thursday night’s preseason game he will be neck and neck with Matt Cassel for the starting QB job.

The one player who’s stock dropped was their top draft pick, 2nd round corner Ronald Darby. He has been forced into a starting role because of the lingering ankle injury of Leodis McKelvin. Rex Ryan put him on an island with no help to see how far he has come. Ha has shined in training camp until the past week and the recent poor play carried over into the preseason opener. He was picked on early and often by Cam Newton and Derek Anderson. He did make a couple of plays but was beaten on several occasions.

The knock on Darby coming out of Florida State was that he didn’t finish plays and didn’t get his head turned around even when he was in good position. That happened in this game as he was constantly right there but the receiver came up with the plays more often than not.

Luis Sung (@PhinManiacs): Every preseason game sees some players’ stock go up and down, and the Miami Dolphins are definitely no exception. What is surprising however is just whose stock rose and whose stock fell.

A high riser for the Dolphins is undrafted rookie linebacker Zach Vigil, who was signed as a free agent after going undrafted out of Utah State. Vigil has been the best of four undrafted free agent linebackers in training camp, and after the game against the Chicago Bears, Vigil increased the gap between him and his peers. He accumulated 5 tackles and a sack during his time on the field, and no matter where the ball was, Vigil seemed to somehow make an appearance. He’s showing excellent instincts and vision, as well as good tackling skills. If he can continue to develop at this pace, it’s possible he could be the Dolphins starting middle linebacker next year.

The one whose stock dropped like a stone was running back LaMichael James. Now wishing to be called “LaMike”, the former Oregon Duck was making a name for himself in training camp in ways that I’d never seen before. He was quick, he was smooth, he was explosive, he was one of the surprises of training camp…but as we all know, camp success doesn’t always translate to game success.

On five carries, James only managed to gain 13 yards, averaging a paltry 2.6 yards a carry. And his receiving stats weren’t any better. He made one catch and only got 2 yards out of it. Add to that his error-filled kick and punt returns and we have a serious case of Legedu Naanee-syndrome developing here. Of course, since that game, James’ magic has disappeared, and so has he. If he wants to prove he’s worthy of keeping around, he’s going to have to get back to impressing in camp, and make a big showing against the Carolina Panthers on Saturday.

Matt Barbato (@NewYorkJetFuel): One Jet whose stock improved was undrafted free agent Deion Barnes. The Penn State product had an impressive showing in his NFL debut going mainly with the second and third units at outside linebacker. Barnes recorded three tackles, but seemed to have his nose around the play quite a bit more.

Barnes will have some more work to do before securing a roster spot. Quinton Coples, Calvin Pace, Jason Babin and Lorenzo Mauldin appear to already be locks to make the roster at the OLB position. Barnes may not have a spot with the Jets, but his performance in the preseason opener could help him land a spot with another team.

One player whose stock dropped is running back Daryl Richardson. Richardson lost one yard on four carries and fumbled a handoff on the first play of the second half. Richardson didn’t look good running the ball even though his blockers were getting blown up in front of him. The Jets already have Chris Ivory, Bilal Powell and Zac Stacy as locks to make the roster. Once Stevan Ridley comes off the PUP list, Richardson is likely a goner. His preseason performance only cemented that.

Ian Logue (@PatsFans): On Thursday night against the Packers, Patriots fourth round pick Trey Flowers made quite the impression in his first outing as a Patriot. The rookie defensive end had a tremendous sack on Aaron Rodgers that saw him streak across the left hand side, beat the left tackle and then leap at the Packers quarterback, taking him down. He also showed good technique and power, often driving his man back when he was locked up with his defender. That’s just the type of player New England could use defensively as they try and improve their pass rush, and it’s hopefully something fans will see more of this season.

However, one player who didn’t have a good night and likely hurt his stock was wide receiver Josh Boyce. Boyce missed a huge opportunity to have a big game with so many other receivers sidelined, which saw both he and Brandon Gibson get the starting nod. Boyce was targeted by both quarterbacks, finishing 0-for-2 when Tom Brady targeted him, which included seeing him run the wrong route and fail to hold on to a 3rd down pass. He didn’t fare much better with Jimmy Garoppolo targeting him, as overall he caught just two passes on 11 attempts (18% completion rate). That’s likely not the performance he was hoping for, and those certainly aren’t numbers that will him earn a roster spot.