7 years ago at 6:48 am ET
Follow @SteveB7SFG
Posted Under: Patriots News 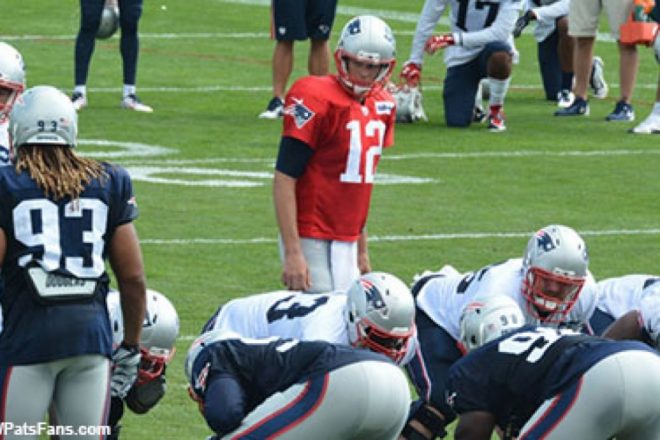 DE is having a strong camp for the Pats

One of the more underrated free agent signings of the spring occurred when the Patriots signed former Cleveland DE/OLB Jabaal Sheard. Sheard had become a victim of a revolving door of different coordinators and defensive philosophies with the Browns and his production suffered for it.

Playing with a broken bone in his foot may have also had something to do with his dip in production that saw him register only two sacks in 2014.

But the Patriots wasted little time and swooped in and signed him on the second day of free agency to a two-year contract worth a reported $11 million with $5 million guaranteed. Sheard entered the draft in 2011 and was widely rumored to be on the Patriots radar but the team selected Ras-I Dowling and the Browns shortly thereafter grabbed Sheard in Round 2 with the 37th overall pick.

Sheard spoke with the assembled media after the in-stadium practice on Wednesday evening and said he feels right at home. “It’s a family atmosphere and everybody gets along. Everybody is pretty cool, close and tight,” Sheard said. “They welcomed me with open arms and I feel a part of the team. I feel like I’ve been here forever.”

Sheard said he studied his playbook hard during the spring and worked hard to acclimate himself to his new team during OTAs and mini-camp.

So what exactly will Sheard’s role be in 2015 with the Patriots defense?

Only Bill Belichick and Matt Patricia know that for certain. With edge rushers Rob Ninkovich and Chandler Jones already in place, a true rotation would definitely seem to be in the cards this season. Jones and Ninkovich have logged some of the most snaps of all defensive ends in the NFL in the past few seasons. Sheard’s presence along with rookie Trey Flowers, who’s been getting a lot of reps in camp would definitely ease that somewhat.

Much was made of the first interception of Tom Brady in training camp on Tuesday by Malcolm Butler, but the play was helped by Sheard. He crashed hard off the left edge and forced Brady to make a mistake. As Bill Belichick says frequently, defense is the pass rush and coverage working together.

Brady has certainly taken notice, he can seen prior to the snap during team drills making a mental note where Sheard is lining up.

But Sheard isn’t a one-trick pony who can just rush the passer a la Mark Anderson during the 2011 season for the Patriots. Coming from the tough and physical AFC North and playing Pittsburgh, Baltimore and Cincinnati twice a year, setting the edge in the running game is paramount. Sheard can do that and can be a true three-down defender.

Sheard is a versatile, tough defender who can do a variety of things. While dropping into coverage isn’t his strong suit, he can do so as well as defend the run and rush the passer. It was interesting to note that he was watching the Patriots Hall of Fame induction of Willie MacGinest closely on Wednesday. They possess many of the same qualities.

“That’s amazing,” Sheard said, speaking on the HOF ceremony of McGinest. “A guy that played multiple positions, a legend just to have him around and see his face. That’s a guy that I watch film on still to this day.”

“How he used to rush, how he attacked, and how he was relentless. It’s amazing to be out here with him.”

Sheard could easily find himself in a similar role wearing different hats from week-to-week depending upon the opponent or the situation. He’s a versatile, tough competitor who fits in quite well with what the Patriots like to do on defense.

He’s having a very impressive camp so far and is one of the players that fans heading down to watch the practices should keep their eyes on.
________

Another player to watch is third-year LB Eric Martin; the Nebraska alum also came over from the Cleveland Browns and is quietly having a nice start to training camp.

No one gave him much of a chance to make the roster but he’s been showcasing some nice work in the one-on-one pass rushing drills.  During the 11-on-11 team phase, he’s been active and always seems to be around the ball.

With Wednesday’s in-stadium practice in shorts and shells, it is expected that the team will practice in full pads on Thursday afternoon. Bill Belichick is slated to hold a press conference at 1:15 and practice is to begin at 1:45.

Stay tuned to PatsFans.com for the latest camp updates and check out our daily photo gallery on our Facebook page.