3 weeks ago at 9:28 am ET
Follow @MarkMorse5
Posted Under: Patriots News 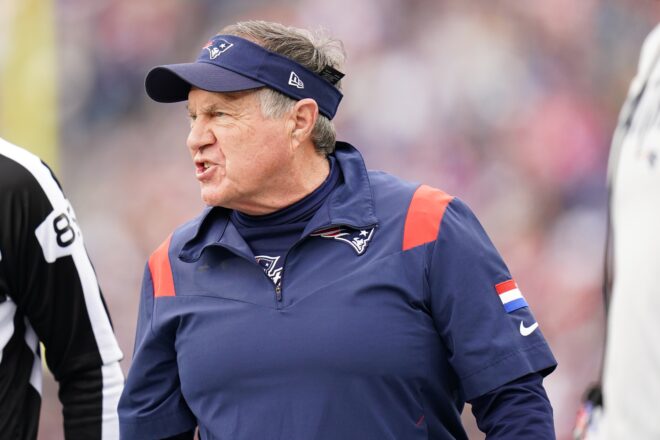 Now that we have regurgitated the end of the 2022 season we can start to look at the reasons why the season was in such turmoil, what can be done to address those problems, and the turnover of personnel!

Bob Kraft sent out the notices for the season ticket renewal last week.  In that notice was a letter from Kraft.  In it, he said how displeased he is with the results the team has generated over the last few years.   Here is a quote from the letter:

“We can assure you that no one in our organization is satisfied with the results from this past season. In the weeks ahead, we will be making critical evaluations of all elements of our football operation as we strive to improve and return to the playoffs next year.”

Every year the roster turns over by 30%.  That is just how Bill Belichick operates.  This season it was 37%.  Next year it may be more. The Patriots have 11 draft picks and the 4th most room under the cap.  Let’s start by looking at those players entering Free Agency.

Of these players, I would like to see the Pats sign Jon Jones, Jakobi Meyers, and Joe Cardona.  I think that Cody Davis can be re-signed at a vet minimum as he rehabs from knee surgery.  He will be 33 for the 2023 season.  Jones and Meyers will require market-value contracts.

Pay your own players that you know, that you have developed, and show the other players on the team that its possible to play here for more than one contract.

Next week I will start examining the team position by position.

The inexperience of the offensive coaching staff killed the team this year.  As I stated back in May when I predicted the Patriots to go 6-11, you can’t lose as many offensive coaches as the Pats did and expect to win.  They lost 5 offensive coaches Josh McDaniel, OL coach Carmen Bracillo, WR Coach Mick Lombardi, QB coach Bo Hardegree, and RB coach Ivan Fears retired.  The team is still not set on replacing Dante Scarnecchia as the O-line coach.  It was Scarnecchia that was credited for getting the most out of the lackadaisical Trent Brown.    You don’t have such a brain drain and expect to replace it and be functional.

TE Coach Nick Caley was blocked from leaving the team and joining Josh McDaniels in Las Vegas.  Caley was not given the title of Offensive Coordinator but was passed over.  I guarantee he will be gone soon, as his contract is up this year.

The “hiring” of Matt Patricia and Joe Judge as offensive coordinator(s), QB Coach, and Offensive Line coach was a complete disaster.  The Patriots dumbed down the offense, not for the players, but for the inexperienced coaches.  They instituted a new blocking scheme incorporating the stretch block utilized by the Shanahan system.  From the start, this didn’t work and it caused issues between the coaches and the players.  Move Patricia back to his consulting role, similar to that of Ernie Adams.  Take away his play calling and Offensive Line coach duties and hire a qualified O-line coach.  Former Patriot and veteran offensive lineman Billy Yates did as much as he could, but he only has 3 years of experience.  Go out and get an offensive coordinator.  Several good candidates are available such as Bill O’Brien, Kliff Kingsbury, and Zac Robinson.

What team changes their offense when you have a 2nd year QB?   That is absolutely insane.  They said they were simplifying the complex offense that Josh McDaniel had made too complex.  That is bullcrap.  They dumbed down the offense because the two coaches they entrusted the playcalling to had never coached on offense.  The second part of that is there was no one in the organization that knew the Ron Earhardt/Ray Perkins offense of the 1970s.

I found this description from the Baltimore Sports and Life by Mike Randall, Jan 17, 2014, “Erhardt-Perkins is named after two men. Ron Erhardt and Ray Perkins, who ran the offense under Patriots head coach, Chuck Fairbanks in the 1970s. The object of the system was to maximize efficiency in cold weather. They placed emphasis on the run game and the short passing game by showing the defense multiple looks, formations, and combinations of personnel while running simple plays found in all playbooks. Simple to learn, simple to run, easy to call on the fly, and hard to defend.  It has evolved over the years from coaches Bill Parcells, Marty Schottenheimer, Bill Cowher, Bill Belichick, and all his disciples. Consider the fact that Charlie Weis turned Brady Quinn and Jimmy Claussen into 1st and 2nd round picks with this system at Notre Dame.”

Weis taught it to McDaniel.  The only offensive coach left is Nick Caley and the Patriots blocked him from leaving but wouldn’t make him the Offensive Coordinator.   I expect Caley to leave this off-season.  The Patriots are notorious for underpaying assistants and working long hard hours.  They also have one of the smallest coaching staff in the league.

Jones struggled with this offense from the start and the frustration boiled over several times during the season with Jones openly voicing his displeasure on the field with gestures and pouting.  He was acting like a spoiled brat.   Jones has still maintained a 65% completion percentage in each of his 1st two seasons despite being the most blitzed QB in the league the last two years.  I don’t believe there has been another QB to do this in his 1st two years.  Tua Tagovailoa came close with 64.8 as a 1st-year player.

This is according to Evan Lazar of Patriots.com:

According to PFF, if Jones is given a clean pocket, he completes passes at a grade of 89 passing grade, 5th highest in the league.

Mac Jones was under constant pressure from a porous offensive line.  In 2022 they gave up 41 sacks as compared to 28 in 2001.  Bill Belichick gave away Shaq Mason in a cost-cutting move and got little in return.  He also blew the negotiations with starting LG Ted Karras over $1M.  Same thing the year before with All-Pro LG Joe Thuney.  He could pay $12M for a bum WR like Nelson Agholor but couldn’t pay one of their own, a player they had drafted and developed for the $15M open market price.   That was $1M more than the Franchise tag number they paid him in 2020.

The Patriots were forced to draft a Guard Cole Strange in the 1st round of the 2022 draft.  This pick was panned at the time as most Draft pundits felt he could have been taken in the 3rd round.  Strange struggled all season but did show signs of improvement over the last two games, giving up only one QB pressure during those games.

Isaiah Wynn decided that football wasn’t important to him and committed the most penalties of any lineman on the team and perhaps in the league.  Trent Brown was inconsistent and at times lazy.  The only offensive line coach to motivate Brown was Dante Scarnecchia.  Matt Patricia held the title of Offensive Line coach but he was too busy as an Offensive play caller to pay attention to correcting the faults of the Oline.  He left that up to assistant Billy Yates.  He is only in his 3rd year of coaching.  Cole Strange struggled, especially when David Andrews was out of the lineup with an injury.

These were the same reasons I predicted a 6-11 record back in May when the schedule came out.  I was wrong and the Patriots played much better than I predicted.  They were much better on Defense and they kept them in games and even contributed to the scoreboard with 7 defensive TDs.  The hope would be that the Defense would keep them in the game until the Offense got up to speed.  Unfortunately, that didn’t happen until week 18.  The Offense looked good, the best they had looked all year, but three Mac Jones Interceptions (you could say that all three were not his fault) and the special teams giving up two kickoff returns TDs doomed the Pats against Buffalo.  The Patriots were in almost every game they played and easily could have won three more games for an 11-6 record.  Don’t get me wrong, they would not have been a good 11-6 team, but they easily could have had that record.

End-of-year meeting between Kraft and Belichick

According to Tom Curran Kraft and Belichick have already met and Belichick admitted that changes are needed.  It’s not like Belichick to hold a press conference and announce the moves he has made on the staff.  Moves need to be made.  Patricia and Judge need to move from their present duties.  I would like to see Judge back on Special Teams.  They need a full-time O-line coach.  It appears that several candidates have emerged that could be the offensive coordinator.  Bill O’Brien, Kliff Kingsbury, and Zac Robinson’s names have been mentioned.  Matt LaFleur was relieved of his duties with the Jets.  The Denver Broncos have asked permission from the team to interview Matt Patricia for their Head Coaching job.   We expect that Jerod Mayo will get interviews for head coaching positions.  The Cleveland Browns have already asked permission to interview Mayo for their Defensive Coordinator position.  Nick Caley may get an interview with Houston as their Offensive Coordinator.  Caley is close with former Patriots Player Development chief Nick Caserio, the Texans GM.

Patriots Coaches will coach at the East / West Shrine game

It was announced today that the Patriots coaches including Bill Belichick will coach one of the teams at the East / West Shrine game on February 2nd, 2023.  The game will be televised on NFL Network at 8:30.   Last year the Patriots selected 4 players that played in this game, WR Tyquan Thornton, CB Jack Jones, RB Pierre Strong, and DT Sam Roberts.

The Senior Bowl is the same week and played on Sat Feb 4th at 1:30.  Broadcast will be on NFL Network.

By: Robert Alvarez
Robert Kraft and Bill Belichick Release joint statements about Tom Brady after his decision to retire from the NFL for a second time.
1 hour ago

By: Robert Alvarez
The best social media postings in response to the news of Tom Brady's retirement from the NFL after 23 seasons.
4 hours ago