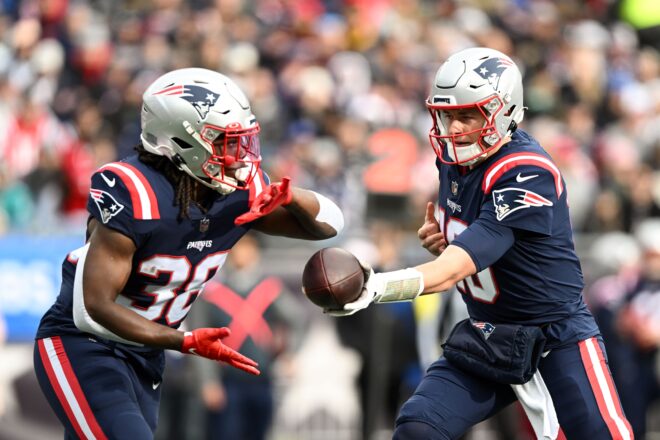 FOXBOROUGH – If the Patriots made a laundry list of New Year’s resolutions, they perhaps checked a few boxes on Sunday.

The nice thing is that they were able to check the box at the top of the list, the one that says “Beat Miami at home”. The Patriots welcomed in the new year 2023 with a 23-21 win over the Dolphins at Gillette Stadium, and maintained their own destiny for making the playoffs. Another box that they checked was “No turnovers, take care of the ball”. The Patriots played a safe and careful game against the Dolphins, and despite the fact that the offense still doesn’t excite you as in old days, the team did play well enough to win in the end.

The Patriots also took advantage of key Miami players who could not play. At the top of that list was quarterback Tua Tagovailoa, who has become the NFL poster child for concussion protocol. Instead of having to face a quarterback who is 4-0 against the Patriots in his career, Teddy Bridgewater started for the Dolphins. At times, Bridgewater looked effective, but overall he wasn’t able to get into a rhythm with Tyreek Hill and Jaylen Waddle and played with the lead for much of the game only because the Patriot offense remains mostly vanilla and unexciting.

Bridgewater himself had to leave the game in the third quarter, as he injured his finger trying to tackle Kyle Dugger on his way to a pick-six touchdown. Skylar Thompson had to come in and finish the game, and other than a nice final drive which made the score close, did nothing to make a difference in this game. If Tagovailoa had been able to start, it is hard to think that the Patriots would have won this game, given the fact that the offense was mostly stagnant and that the weather in Foxborough was very Miami-friendly (game time temperature was 53 degrees with no precipitation).

The Patriots have been hit with injuries also, mostly on defense. But they deserve a ton of credit for holding Hill and Waddle in check all game long. They also put the clamps on the Miami rushing attack, holding them to 86 team yards rushing and a 3.2 per carry average. Take away that last minute drive in the fourth quarter, and this was a solid defensive effort against a team that has gotten the better of them in the last several previous meetings.

Whatever kept the game close was largely due to the Patriots causing it to happen.

In the first quarter, after Mac Jones hit Tyquan Thornton with a seven-yard touchdown pass to make it 7-0, the Patriots had the Dolphins stopped at their own 34 on a three and out. Since it was fourth and one, Mike McDaniel decided to go for it. A false start penalty backed them up five yards, so they brought in the punt team. But Brenden Schooler ran into the punter Thomas Morestead, and it went back to fourth and one. Back out came the offense, and Jeff Wilson got the first down. The Dolphins went on to tie the game on a jet sweep to Hill from two yards out. The drive was over but for that penalty on Schooler.

The Patriots had a chance to get a double score, as they had the ball on their own two-yard line with 1:35 left in the first half, and two timeouts. Rather than take a chance at at least a long field goal attempt by Nick Folk, Bill Belichick played it conservative with two benign runs, a short pass and a long incompletion. The teams walked off the field for halftime tied at 7 as the crowd booed the Patriots. They began the third quarter with a three and out. The chance at a double score yielded zero points.

A real curious play happened late in the game. With 2:28 left in the game and the Patriots at the Miami 29 leading 23-14, facing fourth down and four with Miami out of timeouts, Belichick decided to go for the win instead of a long field goal. Jones dropped back and looked for Rhamondre Stevenson in the right flat, but he was covered. Jones then took a sack by Zack Sieler at the 39 for a 10-yard loss. Thompson led the Dolphins down the field and hit Mike Gesicki from four yards out to make it 23-21. Fortunately, Hunter Henry fell on the ensuing onside kick to end things.

Jones finished 20 of 33 passing for 203 yards, two touchdowns and a respectable 98.4 rating. Thornton led the Patriots with 60 receiving yards, while Jakobi Meyers had six catches. The Patriots weren’t much better at running the ball, as they had 77 team rushing yards and a 3.7 per carry average.

Defensively, Dugger had an interception (the aforementioned pick-six) and so did Jonathan Jones, who did a nice sideline tap dance after getting a deflection off Hill. The Patriots had two sacks and did not give up any big plays.

The bad news comes next week, when the Patriots have to visit Highmark Stadium in western New York to face the possibly top seeded Buffalo Bills. For the Patriots, it’s win and in. But they will have to try and beat Buffalo, who are the top AFC seed at press time. They have a tough Monday night matchup against Cincinnati, and they are in a death struggle with Kansas City in holding on to the top seed. Do not expect anything resembling Josh Allen or any other starter resting for this game.

The Patriots got lucky with wind conditions last year at their last visit to Buffalo, but in the three games since, the Bills have owned the Patriots. They punted zero times in both the Foxborough rematch and the playoff game, and suffocated the Patriots on a Thursday night earlier this season. If the Patriots have any scintilla of hope to win this game, weather will again have to be a factor or several key Buffalo players get hurt along the way.

And if the Patriots win, they will have to go to either Buffalo or Kansas City for a first round playoff. This is all the Patriots can hope for.

The Patriots are still not back to the 12-14 win season levels. They are a flawed team and are lucky to be in control of their destiny going into the final week. If things end in Orchard Park, New York as will be expected, give the Patriots credit for fighting to the end. But this is a different Patriot team than you are used to.

On the other hand, it is a new year, so perhaps all things are possible. You can say this: so far, so good.

READ NEXT:
Monday Breakdown, Observations, Thoughts On The Patriots Win Over Miami
Posted Under: Patriots News