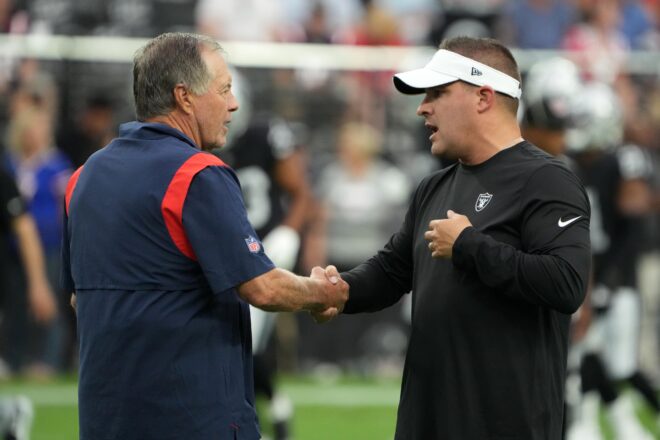 Things haven’t gone quite the way the New England Patriots or the Las Vegas Raiders might have hoped during this 2022 NFL Season, and it looks like NBC and the NFL have acted accordingly.

As both Bill Belichick and Josh McDaniels have tried to adjust to life without each other, the Patriots and Raiders have each endured a rough go of things so far this season.  The Patriots are currently sitting at 6-6 after a frustrating prime-time loss against the Bills Thursday night, while the Raiders are still trying to dig their way out after a rough start and sit at 5-7.

Not exactly a compelling match-up to the common fan, and apparently, that caused their removal from the Sunday Night prime time slot they were set to have just a week before Christmas on Sunday, December 18th.

Instead, it will be the New York Giants and Washington Commanders who will be shown to the nation, with each team still sitting in playoff contention with records of 7-4-1 and 7-5-1, respectively, after tying each other 20-20 this past Sunday.  As a result, the Patriots and Raiders game is now scheduled for 4:05 pm ET.

For the Patriots, there’s likely not much disappointment.  Had the game gone unchanged, that would have marked the fourth-straight night game for the team, which started with their appearance on Thanksgiving out in Minnesota, followed by this past Thursday’s game against the Bills.

They’ll be kicking off the first of two games on the west coast on Monday night against the Cardinals and would have followed that up with a Sunday Night game in Las Vegas.

The change now at least potentially gets the club out of there four hours earlier, allowing them the ability to get back to Gillette Stadium a little sooner as they start getting ready for a nice little two-game homestand that will start with a battle against the Cincinnati Bengals on Christmas Eve at 1:00pm.

READ NEXT:
Patriots Fourth And Two Podcast: Patriots Once Again Dominated By The Bills
Posted Under: Patriots News

By: Steve Balestrieri
"the greatest player to play the game, it means a lot. And I think it means a lot to me, too, because this is where…
16 mins ago