2 months ago at 10:33 am ET
Follow @IanLogue
Posted Under: Patriots Transcripts 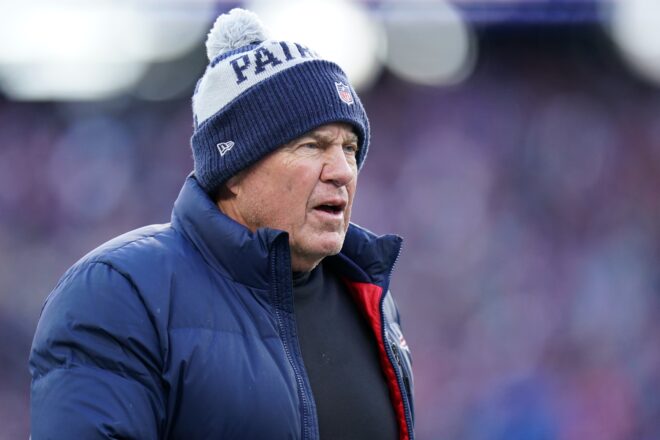 Here’s what Bill Belichick had to say during his weekly appearance on WEEI’s The Greg Hill Show on this Monday morning:

On giving the players the weekend off and what he hopes to see from his players:

“Start getting ready for Arizona.  It’s a team we don’t know very well.  An explosive team and an NFC team, so we just don’t see very much of them.  We’ll get familiar with them and continue to tighten up things on our end.”

On what he felt were the issues that put them in a position to lose against the Bills:

“We need to do a better job on third down and in the red area.  Those would be the two big things.”

On the problems DeAndre Hopkins brings:

“Well, Hopkins is a tough match-up player.  He’s long, he’s got tremendous hands and catching ability, right up there with the top of the guys that have played or that I’ve coached against.  So, he’s a mismatch player and very, very productive.”

On going against quarterbacks who can make plays with their legs and what they need to do to stop Kyler Murray:

“Well, as always, I think it comes down to disciplined defense.  There’s no one man that can stop [Lamar] Jackson or Josh Allen or Murray, whoever those types of players are.  They can do a lot of different things.  So it’s good team defense.  Playing with good awareness, good leverage, good discipline, and obviously good tackling once you get a chance to get them.”

On Kendrick Bourne’s comments about needing to “scheme up better”:

On how the week shapes up to make sure the players have time to prepare but also to get enough rest:

“Right, well, that’s the three days that we’ve had, actually, four, counting Friday, I mean Friday was pretty…everybody was pretty worn out after Thursday night.  But yeah, Saturday, Sunday, today for the players, and then we’ll come back and get to work tomorrow.  So we’ll kind of be back on a normal week once they come back, but at this point in the year, I think players can use a few extra days to get over the bumps and bruises and, like I said, just come in with a new outlook, a fresh outlook here on Arizona.”

On if the play is just to stay out there, and if so, what’s that like preparing knowing they’re going to be on the road for two weeks?

“Right, well it will be about, eight days.  We’ve done that before, and Vegas is a team that we have some familiarity with from preseason, we spent time with them out there.  But, at the same time, a lot of things have changed, for them and us, since back in August.  We’ll start to work on, again, we have people on our staff doing different things.  Some people move ahead, and other people stay and focus on the game that we have and then catch up after the game.  Kind of be in our normal cycle there.”

On whether or not he’s considered making a change with the offensive playcalling or the system they’ve been using over the first 12 weeks of the season:

“I think we need to do what we’re doing better.  I don’t think, at this point, making a lot of dramatic changes, it’s too hard to do that.  If we can just do consistently what we’re doing, I think we’ll be all right.  But we just haven’t had enough consistency, and that’s hurt us.  It’s not one thing.  One time, it’s one thing, the next time, it’s something else.  We just have to play and coach more consistently.”

On his comments to the Globe about if the Patricia/Judge experiment that he would be to blame and how he’s feeling about how it’s worked so far.

“Well, I’m responsible for our team’s performance.  So, I accept that.”

On Mac Jones’ comments about wanting to be “coached harder”:

“Well, we coach everybody the best we can every week.  That’s not going to change.”

On if it’s a lack of focus or poor technique when looking at their issues with consistency:

“Yea, I think it’s been a little bit of a combination of things on every front, really.  Coaching, playing, penalties. We’ve had some high penalty games, and then we’ve had some low penalty games.  We’ve had some turnover games, and then we’ve had some no-turnover games, and so forth.  It hasn’t always been the same problem or hasn’t been the same problem on certain plays.  Sometimes that’s shifted, and there’s certainly been some plays that haven’t matched up well against the defense when they were called.  Whether that’s the design of the play or the way it hit against a certain defense, those have come up as well.  So yeah, I’d say it’s a combination of things.”

On if he’s worried about Jones’ progression going forward:

“I think we’d all certainly like to be doing better than what we’re doing.  From a record standpoint, from individual execution.  But we’re going to look ahead, not backwards, and look towards the next opportunity here against Arizona and get back on track this week.  I think that all the people I’ve talked to, players, coaches, I think we all feel the same way about that.  We can’t control what’s already happened, but we control what’s in front of us.”

READ NEXT:
Five Monday Thoughts: Gap Between the Patriots’ Offense and the Rest of the NFL Feels Like a Big One
Posted Under: Patriots Transcripts