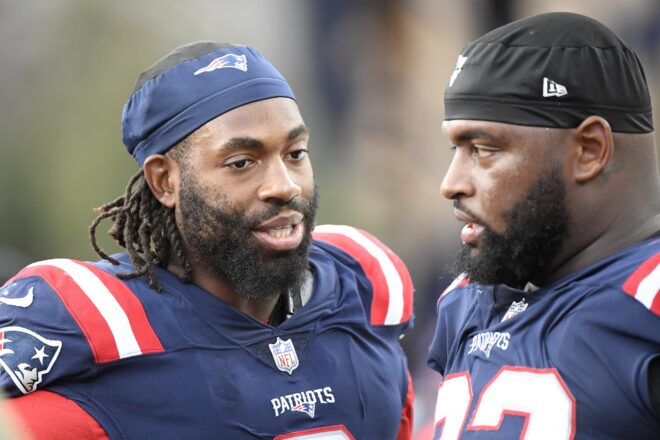 In the end, that was plenty to overcome the Indianapolis Colts.

What used to be Brady versus Manning and the rest of the pro football world coming to a standstill has now become two franchises trying to reinvent themselves. At this point, the Patriots are far ahead of the Colts, as the Patriots were able to defeat the Colts 26-3 on Sunday afternoon at Gillette Stadium. The Patriots exacted some revenge for the 27-17 loss to the Colts off the bye week last year at Lucas Oil Stadium, which sent the Patriot season literally down the tubes. More importantly, they showed that their defense can be elite if they are on their game and play like they can play.

It must be stated, however, that the Colts are a far different team without the premiere running back in the NFL, Jonathan Taylor. The Patriots themselves were so inept on offense that if Taylor had played, the outcome could very well have been different. But no one should take anything away from the effort today from the Patriot defense, who sacked Sam Ehlinger nine times and held the Colt offense to just 121 total yards for the entire game.

Defense ruled the day on Sunday at Gillette, but it was the Patriot defense that truly dominated and walked off the field knowing they were the key cog in the Patriot win. Matt Judon and Josh Uche each had three sacks, while Jonathan Jones had a blocked punt and a pick-six. The only points the Patriots surrendered were off a lost fumble by Jakobi Meyers, leading to a 40-yard field goal by Chase McLaughlin midway through the third quarter. Otherwise, the Colts were stuffed all game long, and “stuffed” is perhaps putting it lightly.

Of much greater concern is the Patriot offense. Yes, the Patriots scored 26 points, but Folk was once again called on to bail out the Patriots and their inability to cash in in the red area. Two touchdowns were scored, but one was by the defense and one was off the blocked punt which resulted in a three-yard touchdown drive. Jonathan Jones was involved in both touchdowns, so he had a better offensive day than Mac Jones did.

The real problem for the Patriots as they head into their bye week is their offensive line. Ehlinger was bullied by the Patriot defense, but Mac Jones wasn’t that far behind in being uncomfortable all game long. Mac Jones completed 20 of 30 passes for only 147 yards and a touchdown. His rating was 89.2. Perhaps the best consequence of this game for Jones was that for the first time this season, he did not throw an interception. Jones did a great job in protecting the ball, but he had very little time to throw all game long and never got into a rhythm.

The running game was also pretty awful. The Patriots rushed for 70 yards on 28 carries as a team, averaging 2.5 yards per carry. Rhamondre Stevenson was held to 60 yards rushing, as he never established any consistency or gave the passing game any chance to succeed. J.J. Taylor chipped in with only nine yards on ten carries, but his greatest contribution was recovering a Kendrick Bourne fumble in the fourth quarter.

Right off the bat, one can say that the Patriots miss injured center David Andrews like crazy. Centers don’t just hike the ball and block. They also call out blocking assignments, which is perhaps the biggest reason why James Ferentz isn’t able to help run the offense like Andrews is. Rookie Cole Strange had an early illegal hands to face penalty called on him and wound up getting benched early on. Yodny Cajuste was forced to play right tackle in place of injured Marcus Cannon. Isaiah Wynn had to play guard in place of Strange, himself suffering through his worst year as a pro.

Add all this up and you have a problem that perhaps even Dante Scarniecchia could not fix. It all began with Wynn being shifted to right tackle to accommodate the return of Trent Brown as left tackle and it has gone downhill from there. Against teams like Indianapolis, Detroit and Cleveland, this sort of thing won’t really matter. But the Patriots have better teams remaining on their schedule (they have the second toughest schedule in the league), and bad offensive line play won’t get them wins.

The Patriots do have a bye week, but that may not help. A week off won’t necessarily produce better blocking, better chemistry and better results. Last year, it was the Colts who spanked the Patriots coming off their bye week. Their next game is at home against a Jets team who just knocked off Buffalo and will be bent on getting revenge on getting beat by the Patriots last week. Alex Wilson may again play badly like he seems to do against the Patriots, but bad offensive line play might not work against the Jets like it did against the Colts.

Ehlinger finished 15 of 29 for 103 yards, one interception, and a rating of 45.6. Ehlinger led the Colts with 39 yards rushing, which was exactly half of the team total of 78 rushing yards. Jordan Wilkins led the Colts with four catches, while Alec Pierce had one catch for 23 yards, which also made him the top receiver on the Colts. This underscores how well the Patriot defense held down the Colts all game long.

As previously stated, no Patriots game next week. They play the following Sunday at home against the Jets before two straight Thursday games against Minnesota and Buffalo. Injured players will be able to come back, but as far as game execution goes, a lot more than a week off is needed for that.

The Patriots will always take the win, but much more needs to happen if the Patriots want to be a serious contender for the postseason. Every AFC East team is good to great this year, with no tomato cans. The Patriots cannot allow another post-bye week stinker like last year.

As for the defense, pin your ears back and keep on coming. Today will not be the last time you win a game for the Patriots.