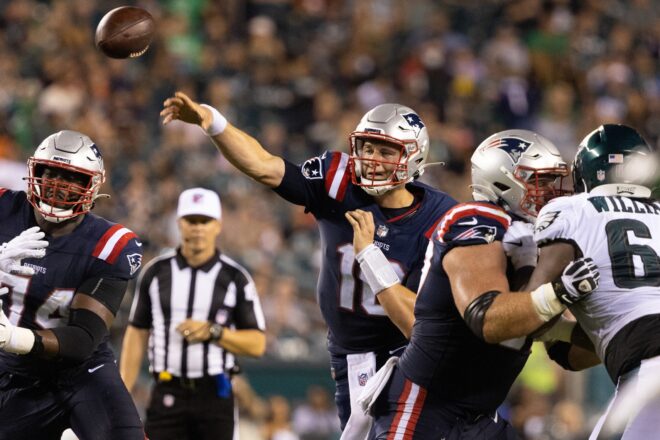 The second-year quarterback is stepping back under center for the first time in nearly a month after suffering an ankle injury against the Ravens back on September 25th, and the stakes have certainly changed.

Jones has spent the last few weeks as a spectator as the train that is the NFL season continued without him, but the initial plan for how they were going to deal with things during his absence certainly took an unexpected turn.

When Jones went down, veteran backup quarterback Brian Hoyer was expected to carry the baton while Jones was out and pass it back to him whenever he was healthy.

Instead, Hoyer made it just 10-minutes into that Week 4 match-up in Green Bay, which thrust rookie Bailey Zappe into the spotlight, and in a nice little twist, Bailey ended up stealing the show.

The rookie came into the game and was about as calm as could be, immediately settling into the offense and engineering enough points to force overtime as the club nearly pulled off an upset against Aaron Rodgers and the Packers.

When the team returned to New England, Hoyer remained out with a concussion, and Zappe suddenly found himself propelled into the starting role.

Anyone wondering if he’d be up for the challenge ended up being pleasantly surprised.   The former standout from Western Kentucky didn’t miss a beat and has since gone on to go to 2-0 as a starter.  It’s been arguably the biggest story of the 2022 season in New England, and it’s a key reason why the Patriots remain in the running in a conference and Division where 3-3 still has them very much with an opportunity to control their own destiny.

For Zappe, his performance over the last two games has raised his stock to the point where Jones comes into Monday night needing to be razor-sharp with a lot on the line.  As it is, while fans in New England spent the offseason buying up his jersey, they remain as fickle as ever.  Everyone loves an underdog and Jones went from being one last year against Cam Newton to now sitting in Zappe’s way from allowing the rookie to remain the starter.

Anyone who watched the contest two weeks ago saw how it ended.  As Zappe walked off the field at Gillette Stadium after beating the Lions, fans were chanting his name.  The rookie had an unreal outing after missing just four passes as he completed 17-of-21 (81%) for 188-yards along with one touchdown and an interception in a 29-0 blowout win where the offense put up 22 points.

He followed that up last week in Cleveland by completing 24-of-34 (70.6%) for 309-yards and two touchdowns in a 38-15 victory that got them back to .500.  He’s created a bit of a frenzy and that was apparent on most of the talk radio shows throughout the week, along with an explosion of fans on social media who caught Zappe fever. 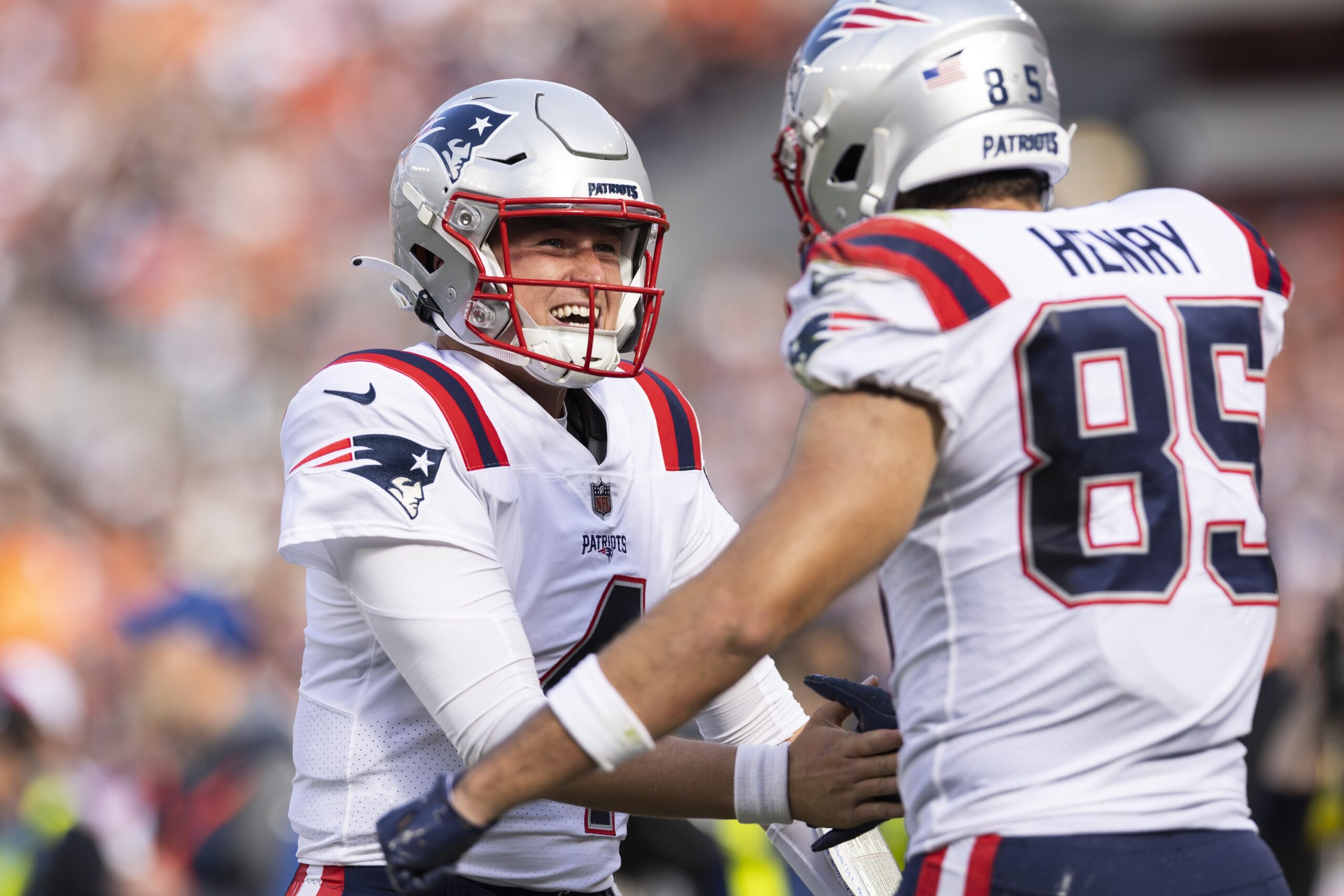 Zappe may not be starting, but he’s also not going anywhere for a while. (PHOTO: Scott Galvin-USA TODAY Sports)

It’s been a fun ride, and the beauty of this situation is the fact Zappe is just getting started, and he’s not going anywhere.

While he’s not starting Monday night, fans can take solace in the fact that he’s already accomplished quite a bit.  He’s further cemented his place in the quarterback room, while also proving to the coaching staff – and likely other clubs around the league – that he’s capable of winning games in the NFL.  That’s no small feat, especially given how many players in his position couldn’t perform when called upon.

He did his job and as a result, he’s moved ahead of Hoyer on the depth chart into the backup role, which is step number one.  How things go from here is out of his hands, other than the fact he’ll need to continue getting better and doing everything he needs to do behind the scenes to help Jones and the team prepare.

At the same time, what played out these last few weeks should be a stark reminder to Jones of just how quickly things can potentially change in this league.

Jones is no stranger when it comes to not having things handed to him having had to fight to become a starter at Alabama.   So far, he’s risen to each challenge and his team has benefitted as a result.

That needs to continue when he steps on the field Monday night.  As Jones spoke with reporters recently, it was clear that he knows he’s got his work cut out for him.  He’s likely spent the last few weeks reflecting on what went wrong during his previous three starts, along with having a new sense of purpose and focus after seeing Zappe emerge and the whispers that have followed.

Anyone who has ever seen the movie Draft Day likely understands the saying, “We live in a very different world than we did just a few weeks ago.”

That’s now the reality for Jones, who suddenly has a player behind him to push him moving forward.

But with all that being said, Jones’ job isn’t going to be that hard as long as he plays within himself and becomes more selective when it comes to picking his spots.

After all, four of his five interceptions have come on 50/50 balls to DeVante Parker, with his final interception coming on a play where he was hit as he was releasing the football on a play to Kendrick Bourne in what turned out to be their final offensive play against the Ravens.  It was also the play he was injured on.

However, the offense has looked a lot different since then.  There’s now more of an emphasis on their ground game as well as a big improvement along their offensive line.  Those two factors have seen them executing more play-action passes, which have resulted in more open looks for receivers and higher-percentage throws.

That’s what they’ve needed.  Zappe has benefitted greatly from that over the last two games, and that should be something that helps things go a little differently for Jones this time around as well.

After a month away from the game and likely a little pain still in that ankle, it’s going to be interesting to see how he responds.

But these are the moments Jones has always excelled with in the past when the pressure has been on.  With the ball now back in his hands, it’s now up to him to take it and run with it as the second-year quarterback looks to continue his NFL career tonight.