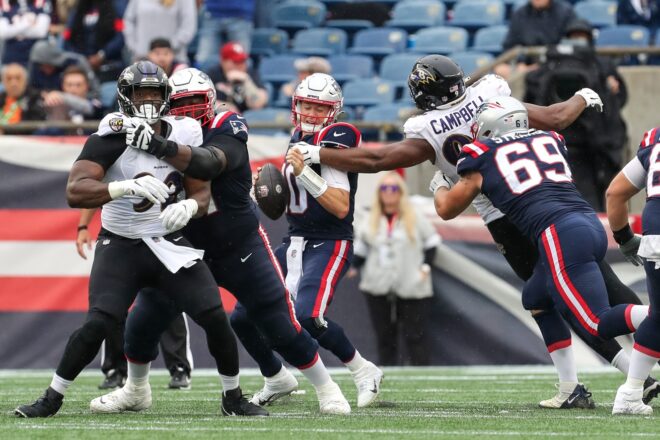 Patriots quarterback Mac Jones was back at practice again on Wednesday, which doesn’t make much sense given the severity of the high ankle sprain he suffered just over 10 days ago against Baltimore.

Jones was out at practice with an ankle that was reportedly heavily taped and was moving around with a “noticeable limp”.  Video posted by several reporters showed the New England Patriots QB going through the process of throwing a few passes, but when he was forced to take any kind of step, the limping was indeed noticeable and he appeared to be in a fair amount of pain.

That sort of begs the question of, why is he even out there?

Bill Belichick spent much of last week calling Jones “Day-by-day” as the quarterback was out on the practice field before being downgraded to “Out” ahead of Sunday’s match-up against the Packers.  It’s probably safe to say that most people saw that coming, especially given how much pain he was in following the loss to the Ravens and the reports that emerged later on about the severity of the injury.

That being said, whatever ruse the club was trying to pull off ahead of the meeting by making Green Bay believe he might be out there seemed like it did more harm than good, considering reporters who spotted Jones pointed out that his ankle wasn’t taped any heavier than normal.  That means Jones had to make the trek down to the practice field on a bad ankle, and he’s back out at practice again today on that same bad ankle.

Given how bad he’s limping, it appears to make little sense to put him out there unless there’s any shot of him being active this weekend.  While several reports have said Jones is apparently pushing to play, barring an incredible turnaround over the next few days health-wise, that doesn’t seem likely. Not to mention that any shot the second-year QB takes where he’s wrapped up around his feet could potentially reaggravate the injury and drag out his recovery.

Meanwhile, Brian Hoyer wasn’t present for the session but newcomer Garrett Gilbert was out there with Jones and Bailey Zappe, with Zappe being the most likely candidate to get the nod this week.  According to reports, Jones didn’t take part in the team stretching portion of practice.

With Hoyer out, it’s possible Jones was just out there to advise Gilbert, as the newcomer would likely earn the designation as the back-up behind Zappe this weekend if Jones can’t go, with Jones potentially being the emergency quarterback.

The team is currently preparing for the Detroit Lions, who will visit Foxboro this Sunday.