1 month ago at 11:17 am ET
Follow @MarkMorse5
Posted Under: Patriots News 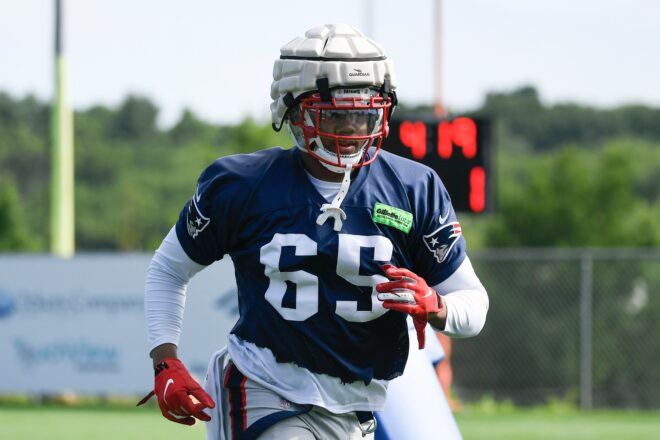 The cutdown to 53 has been made and there are a few surprises as there always is.

Chasen Hines makes the team.  Nobody saw this coming.  He spent most of the off-season on the NFI list and got a slow start to training camp.  Nobody reported he did anything in the joint practices or in the pre-season games to earn a spot, yet here he is.  Hines is 6’3” 327 lbs and started 18 games for LSU at RG and 1 at LG.  He also served as the backup Center.  They ran multiple running schemes at LSU and he is familiar with both the zone and gap blocking schemes.   He is stout and has long arms but was deficient in weight lifting, only putting up 20 reps at the combine.

I was disappointed when I saw this.  I thought they would keep him on the roster and move him to IR after they had established the roster.  The Patriots must have felt that his concussion was not going to allow him to play in a month or so.  Right now he is out for the season unless they come up with an injury settlement and waive him injured.  Then they can re-sign him if he clears waivers.

Montgomery’s injury must not be serious

We got that indication from Bill Belichick on Monday.  Hence the waivers on both JJ Taylor and Kevin Harris.

They were not going to keep both.  Davis is a mountain of a man and can be tough to move out of there at the Nose Tackle position.  I thought Ray was having a good camp and he might not make it through waivers to get to the Practice Squad.  Six Defensive linemen are one too many considering how few times the team is actually in a true 3-4 alignment.  With the advent of these spread offenses, the Patriots are in nickel and dime more often.

BB made the swap of core Special Teamers.  Justin Bethel has been one of the best gunners in the league for a long time.  His time may or may not be up with the Patriots.  He could very easily be resigned when someone like Tyquan Thornton goes on short-term IR.   Schooler played well and deserves to be kept, especially given Matthew Slater’s age.

Roberts and Mitchell make the team

I like what I saw in both of these players. They both showed they could push upfield and put pressure on the QB.  Roberts is making the jump from Division II.  I expect him to be inactive most weeks.  Mitchell was also excellent on Special Teams which helped him make the team.  He also excelled as a situational pass rusher.

10 Rookies make the team with 2 being UDFA.

The Patriots continue their streak into the 20th season in which a UDFA makes the team.  After the dismal stretch of blown drafts from 2018 – 2020, it’s nice to see 8 draft picks make the team.  Kevin Harris was cut, but he is a prime candidate for the Practice Squad.  Harris played well in the 3rd Pre-season game but didn’t do much overall in camp.

Wow, what a pair of duds.  Both were 3rd round draft picks in the 2019 draft.  The Patriots actually traded up for both players.  Asiasi and Sokol would be candidates for the Practice Squad.  Smith and Henry get nicked up during the season so having the TEs on the Practice Squad would be insurance.

Pro Football Reference ranked the Patriots’ drafts from 2018 – 2020 the 2nd worst in the league.  Only the Jets were worse.

The fact that 11 DBs made the team is not a surprise.   I am surprised that Bryant and Wade were on the team.  Bryant got beat like a rug down the stretch last season and he didn’t show me that he had changed.  Wade, whom the team paid a 5th-round draft choice to acquire in a trade with the Ravens, just didn’t impress me either.

The team reduces its average age

By carrying so many rookies, they reduce the average age to 28.5 years.  However, they are still the second oldest team in the league.  Tampa Bay is the oldest.

Congratulations to Framingham State’s LB Josh Onujiogu from Wareham MA., who made the Seahawks’ 53-man roster.  The 6’3” 250 lb linebacker had 67 tackles for loss and 36 sacks for his career in the Division III MASCAC league.   Onujiogu had a 4.90 40-yard dash at his Pro Day conducted at Holy Cross.  That’s not very good but his 3-cone time was an astounding 6.93.  More quick than fast.