2 months ago at 9:00 am ET
Follow @IanLogue
Posted Under: Patriots News 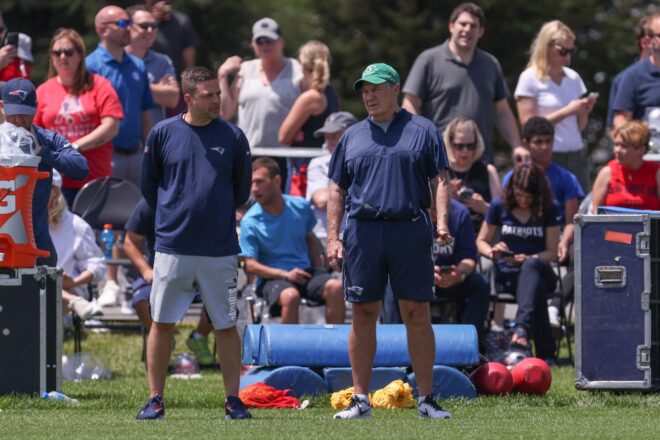 Some Patriots news on this Tuesday:

– The New England Patriots’ offense continued to struggle on Monday, with the defense again looking like the better of the two groups.  So far, their transition to what players had said last week allowed them to play faster appears to be a little challenging.  By all accounts, players are still having a tough time getting comfortable and Mac Jones still seems like he’s having a little bit of difficulty during the full team portions of practice.  There still seems to be some breakdowns and issues of execution, which isn’t exactly ideal but fortunately, there are still a few weeks left to get things figured out ahead of the regular season.

– There were issues all over.  Trent Brown jumped early on a play, which led to a penalty lap.  Jones got picked off on a play by Joejuan Williams, leading to the offense having to do push-ups.  There were incompletions, difficulties with the offensive line opening up the ground game, would-be sacks, and a host of other problems that left the offense frustrated by the time it was over.

– When the practice finally ended, David Andrews was among those gathering the offense together as he addressed everyone before they eventually broke and he spoke with reporters.  Andrews acknowledged that while things aren’t always perfect, trying to at least be consistent is key and the most important thing is keeping one bad practice from becoming another.  “Look, it’s just part of it,” Andrews said via Boston.com. “It’s ups, it’s downs, it’s training camp. Got to go in, learn from it and see what we can do better. Like I said, can’t let today or any day derail anything in the future. That’s just how it goes. Wins, losses, you’ve just got to stay steady. You can’t go up and down.”

– Head coach Bill Belichick also said prior to Monday’s session that every day “is a challenge” and that the goal is to try and install things at a rate that allows them to be productive.  While it doesn’t always work out that way, he said the goal remains the same.  “We try to do things we think are most important and most necessary that will help us win. That’s just kind of what we do,” said Belichick.  “You can get everything in and not execute it very well, or you can get in less and hopefully do it better. That’s usually the way it works, or there’s somewhere in between. I’d say usually, we fall somewhere in between: don’t get in everything we want, but feel like the things that we can do, at least we’re doing it at a competitive level. Not saying it’s great, but at least we can go out there and do it. So, we’ll see.”

– Meanwhile, on the defensive side of the ball, rookie Marcus Jones again saw a fair amount of time on the defensive side of the ball on Monday, with Jones being used both in coverage as well as seeing some opportunities on blitzes.  His athleticism continues to be on display and it will be interesting to see if he sees any action with the first team defense Thursday night when the team opens the preseason against the Giants.

– There were a few bright spots on Monday, with Mac Jones finding Tyquan Thornton for a big play after Thornton put quite the fake on Terrance Mitchell, with the rookie getting behind him to haul in the pass from Jones.  Thornton continues to impress during camp and appears poised to break the streak of tough luck the club previously had at drafting that position.

– Despite the secondary being a concern, they’ve overall been strong so far during training camp in coverage.  Obviously, it’s hard to know how that will translate when they start going up against people other than their own teammates, but what initially seemed like a giant red flag has looked less so thus far.

– Rookie Chasen Hines came off of PUP on Monday and practiced, which will hopefully provide some additional depth for an offensive line that had some tough moments on Monday.  Fellow rookie Andrew Stueber remains on the non-football injury list, with James White being the final player still not having been able to go to this point.

– Speaking of their injury situations, Belichick also credited his strength and conditioning staff for the fact his team is healthier than it’s been to this point in previous training camps.  “I feel like our team’s as healthy as it’s ever been at this time of year,” said Belichick.  “Part of that has to do with the offseason program, the way guys have worked, and maybe part of it has to do with the way we’ve practiced. But we really have very little in the way of players missing time – players on PUP, NFI, we’ve pretty much cleared that up today. Last year, we had six or seven guys in that category.”

– One interesting name that popped up on Monday was rookie Sam Roberts, who made a name for himself in college by blocking five kicks and he was in on one attempt by Nick Folk during the session.  Roberts remains one of the more intriguing names given his size and his power and it sounds like he’s having a good camp thus far.

– The team moved today’s practice up from 4pm to 12pm, which will be their final public session before their preseason opener.  Gates open at 11am.

By: Steve Balestrieri
Despite garnering only 18 snaps, Bourne was the Patriots' second most productive receiver catching four passes for 58 yards
55 mins ago

By: Robert Alvarez
Prior to Sunday’s matchup with the Baltimore Ravens, the New England Patriots held a special induction ceremony on Saturday for former nose tackle Vince Wilfork…
14 hours ago

By: Robert Alvarez
A look at defensive lineman Davon Godchaux’s journey to the NFL from Louisiana State University Football to the New England Patriots.
15 hours ago

By: Ian Logue
Considering the reaction coming off the field on Sunday by Mac Jones after Calais Cambpell landed on his left ankle, it sounds like the news…
18 hours ago

By: Ian Logue
Some thoughts following the New England Patriots dropping a frustrating one to the Baltimore Ravens on Sunday.
19 hours ago
wpDiscuz