The more we hear about New England Patriots first-round pick Cole Strange, it’s hard not to get a little excited about the idea of pairing him up with center David Andrews for what should be a nasty offensive line duo in 2022.

Strange is a player who loves to punish opponents, which his former head coach, Rusty White, spoke about at length this week during an appearance on the Next Pats Podcast with NBC Boston’s Phil Perry.

White provided some terrific insight on the rookie out of Chattanooga, who appears to be pretty fearless and seems like he’ll bring quite a bit of attitude with him up front.

“You look at him, he’s old school, face bar face mask, no gloves, no tape, no sleeves, put your hand in the dirt, doesn’t matter if it’s hot, cold, whatever, let’s go play,” said White. “Cole probably had more personal fouls on our team than anybody just because he finished to the echo of the whistle.”

“Guys officiating don’t know how to handle that.  He’s blocking a guy underneath the stands in a game we’re winning at the end of the game.  He just tries to bury people.  I mean, he’s aggressive, he’s physical.  It doesn’t matter who it is, whether it’s a d-lineman, a linebacker, a DB.”

Obviously, that will need to get reeled in a bit at the NFL level, but the fact he plays that way is definitely great to hear.  Now take into account that they already have someone similar up front in Andrews, who as we know is also a fierce competitor himself.

The veteran has made it clear he isn’t afraid to mix it up with opponents, especially after seeing him get into it while coming to the aid of Mac Jones at multiple points last season after the rookie took some tough shots by opposing defenders that Andrews wasn’t pleased with.

The former undrafted free agent has always played with an edge.  In fact, his style of play has been a big advantage for a team that prides itself on the running game.  His absence a couple of seasons ago in 2019 when he missed the year with blood clots in his lung saw a drop off in New England’s ground game.

Now all of a sudden, you pair him up with someone like Strange and opponents have to deal with two incredibly fierce, physical players.  It also should make things more difficult for teams to bring players up the middle against the Patriots’ young quarterback, as keeping Jones upright is obviously the goal heading into 2022.

Andrews explored free agency last offseason but came back on a 4-year deal worth $19 million and is under contract through 2024.  So if nothing else, the two will hopefully get to work together for at least a few more seasons.

Meanwhile, White points out that Strange’s nature is just to punish opponents, which should make him fun to watch for a team that also prided itself last season on inflicting their will against opposing clubs in the run game.  For Strange, it sounds like it’s part of the game he enjoys and White said the tape shows plenty of examples of how he approaches the game.

“But that’s it.  I mean, we can show you clips of him in college putting a guy in the umpire’s lap all the time, or driving him down the sidelines, or finishing a guy off that jumps in the air.  He plays the game the old school way, which I think will be really great in New England.  I think he’s going to fit in real well with that tough, hard-nosed personality, persona up there in that part of the country.”

With Andrews showing him the ropes, it should set up what should be a fun year.

(EDITOR’S NOTE: Portions of the above appeared in a recent news/notes column)

By: Ian Logue
The more we hear about New England Patriots first-round pick Cole Strange, it’s hard not to get a little excited about the idea of pairing…
5 mins ago 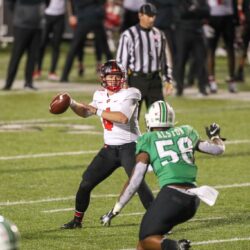 By: Ian Logue
New England Patriots news for Tuesday May 10, 2022 and NFL Notes.
1 hour ago 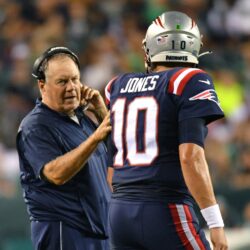 By: Russ Goldman
In this episode, Steve and Derek recap the entire Patriots 2022 NFL Draft class.
7 hours ago 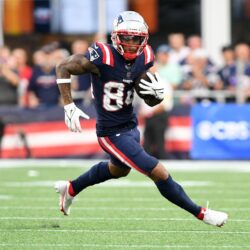 By: Robert Alvarez
Kendrick Bourne documents the NFL Draft party hosted by Mac Jones at his home and shares a funny reaction to the Patriots trading down in…
20 hours ago

By: Robert Alvarez
Watch the exact moment Bailey Zappe received a call from Bill Belichick on draft day in a behind-the-scenes video from NFL Films.
20 hours ago
wpDiscuz