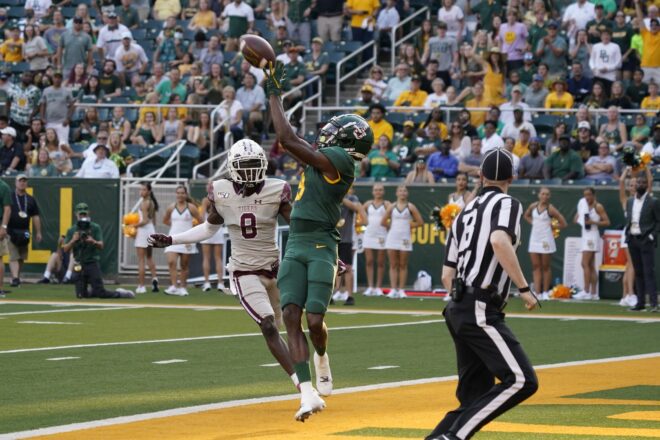 The New England Patriots made headlines during night two of this week’s NFL draft when they moved up from pick 54 to 50 in a swap with the Kansas City Chiefs during the second round.

In turn, the Patriots used the pick to draft University of Baylor wide receiver Tyquan Thornton, a speedy wideout who recorded the fastest 40-yard dash at the NFL Combine with a 4.28.

Speaking with the media on a conference call Friday night, Thornton expressed his excitement about playing for Bill Belichick.

“I love him already, man. He’s a big process guy,” Thornton said. “That’s all we spoke about at Baylor. Staying true to the process. I’m very excited to get to work with him and come in every day and learn my job. I’m ready to learn. I’m ready to compete, and learn with the coaches.”

When asked to describe his new quarterback Mac Jones, Thornton referred to him as “stud” while saying “He plays at a high level. He’s a great quarterback and I’m excited to get to work with him.”

Check out the moment Belichick made the Thornton their pick in the behind-the-scenes video shared by the Patriots below.

By: Mark Morse
The Offensive Line has been a source of controversy this off-season.  Start with the trade of Shag Mason, which Kristopher Knox of Bleacher Report labeled…
6 hours ago

By: Ian Logue
Seeing Patriots QB Mac Jones work with his teammates as a second-year player is just impressive, as Jones is completely in command of things out…
7 hours ago