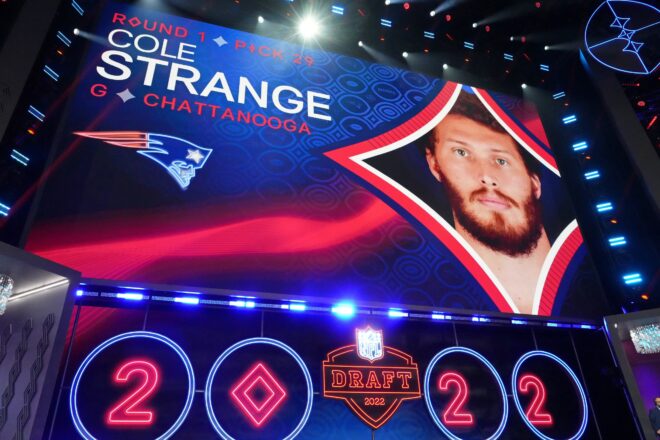 1) The dust is settling following Thursday night’s selection of Chattanooga offensive lineman Cole Strange, with the Scrappy Moc standout having been an unexpected decision when New England finally made their first pick at #29 overall in the 2022 NFL Draft.

The reaction across social media was certainly shocking, especially on a night where so many impact players on both sides of the football came off the board.  The first five players taken early in the round were all dominant defensive players, which then followed a run of offensive players that included 3 big offensive tackles along with 4 talented wide receivers.

To complicate matters further, there were plenty of big names gone who might have been on their draft board before the Patriots had their first opportunity to make a selection.

Gone was offensive tackle Zion Johnson out of Boston College, who was taken by the Chargers at #17.  Also gone was Georgia defensive tackle Jordan Davis, who some mock drafts had falling later into the first round but instead was snatched up by the Eagles after they traded up to #13 to select him.  Another name that went was Northern Iowa tackle Trevor Penning, who the Saints took at #19.

Yet by the time the #21 pick came, it left a pretty good list of players still left for the Patriots to target, with Bill Belichick clearly evaluating who was ahead of him against who was left.

As a result, Belichick stockpiled some picks as he moved back eight spots after making a deal with the Chiefs to trade the 21st pick for the 29th as well as picking up the 94th and 121st selections.

The trade itself definitely worked out in New England’s favor from a value standpoint, given what they picked up to slide back.  But from there, the Patriots saw a flurry of moves by multiple teams who traded up and essentially drained a lot of the remaining defensive talent that New England may have had on their draft board.

At #22, the Packers used their first-round pick from the Davante Adams trade to take Quay Adams out of Georgia.  From there, the Bills made a trade to #23 and took Florida cornerback Kaiir Elam.  Tulsa OT Tyler Smith then went to Dallas at #24, followed by the Ravens taking Iowa center Tyler Linderbaum at #25.

Then, the next three picks may have thrown things off.  The Jets jumped up to #26 with a trade with Tennessee to take Florida State defensive end Jermaine Johnson II, followed by a trade by the Jacksonville Jaguars, who jumped back into the first round and made a deal with the Tampa Bay Buccaneers for the #27 pick, which saw them take Utah linebacker Devin Lloyd, who was the guy we saw on 99% of the mock drafts for New England leading up to Thursday night.  The Packers then took Georgia defensive tackle Devonte Wyatt.

That sequence may have changed New England’s plans, as the pick for Strange certainly didn’t match up with how most people felt things would go.

It’s possible Belichick may have switched gears at that point and already felt Strange was an early second-day prospect and given that they were already at #29, he essentially valued that pick as an early second-round selection.  He also possibly may have felt it wasn’t worth it to trade back again, only to see Strange taken early on day two by someone else for the sake of moving back a few spots.

The other part of the equation is that by moving back and instead targeting him on day two, it’s also possible he didn’t want to risk having to trade up and use additional picks to do it in order to get him as they likely already have other guys in their sights and may need to use some of their remaining 10 selections to go after other players instead.

It was certainly an odd finish, but after having some time to look at things, it does start to make some sense.  Another fact that was pointed out was that by selecting him in round one, the Patriots do pick up the ability to have a 5th-year option, which wouldn’t have been available later on.  Anyone who remembers the situation with Logan Mankins, who many equate Strange with, remember how contentious his contract situation became and that flexibility means the Patriots will potentially have the rookie under contract all the way into Mac Jones’ 6th year in the league.

For now, it may not have been ideal, but it feels like they made the best out of what ended up being a crazy evening with selections made that potentially messed up whatever their original plan was.  The good news is names like Alabama’s Nakobe Dean, Clemson defensive back Andrew Booth Jr, Michigan safety Daxton Hill, and defensive tackle Travis Jones, among several others, are still available and could be guys they go after later tonight.

2) Reports out of Jacksonville are that they jumped back into the round to take Lloyd because they were afraid the Patriots were going to go after him at #29, which is why they reportedly made the trade.

There’s probably some truth to that, but it also would have been interesting to see if the Packers could have been the team that made that move at #28.  Lloyd was mocked on several publications as being a target for Green Bay at that spot, who instead took Wyatt.  With the Jaguars taking Lloyd and the Packers then taking Wyatt, it definitely felt like that might have been when the Patriots changed up their plans.

Belichick sounded a little cryptic during his press conference afterwards, saying that had New England not been able to move back, that Strange would have been their pick at #21, however, it doesn’t sound like that was 100% the case listening to him.

“Yeah, well, if we had stayed at 21, then we would have obviously picked somebody. Probably a good chance it would have been him,” said Belichick.  “I don’t know, there were several teams that we talked to prior to when we made the trade. There were some other conversations going on there, but ultimately that’s the one we chose.”

“Glad Cole was there when we picked, and as I said, feel like we made the best decision that we could at 21.”

Again, the board looked quite different when New England initially moved back and the flurry of trades that ensued changed the landscape greatly.  The only other good news is it also pushed some other names who would potentially be good fits here in reverse, with a couple of players who were slated as round one prospects (Booth Jr. and Dean) instead getting bumped into round two.  So while many are upset about Strange’s selection, if New England goes on to land one of those other names, it’s safe to say most people might end up looking at it a little differently.

Belichick Admits the Deck “got shuffled” on Them

3) Belichick also elaborated a little more about how things unfolded, which again, reinforces the theory of why they may have targeted Strange earlier than they may have wanted to.

“There were a number of trades, there were a couple of player-for-player trades, which is kind of unusual to see,” explained Belichick. “The deck kind of got shuffled a little bit there. I’d really rather than guess at an answer here, we’ll go back tomorrow, we’ll restack our board just like we did a few hours ago going into the first round. We’ll take a look at the projected draft order and so forth and who’s around us.”

“We have a number of picks, so we probably have some flexibility with what we could do over the next two days, different than what we had a few hours ago going into the draft, and try to see what our options are. I’m sure we’ll hear from other teams or have some type of communication with other teams, and maybe that factors into what we do or maybe it doesn’t. We’ll have to wait and see what that is and how it presents itself.”

Receiving Trend Was Front and Center

4) It’s pretty obvious that the massive contracts receivers are signing in free agency these days had a significant effect on how the night unfolded, as we saw a surprising number of receivers get taken far earlier than most people expected.

The first came at the #8 overall spot after USC’s Drake London went to Atlanta, followed by the Jets taking Ohio State’s Garrett Wilson at #10.   Wilson’s teammate, Chris Olave, went next to New Orleans at #11, followed by the Lions jumping up to take Alabama’s Jameson Williams.  Penn State’s Jahan Dotson went at #16 to Washington, followed by Arkansas wideout Treylon Burks, who went to Tennessee.

That’s clearly a trend that may continue given how much contracts have escalated, and it wasn’t just the draft.  There were two trades that went down Thursday night for two different receivers, with Baltimore trading Marquise Brown to Arizona, as well as the Titans sending A.J. Brown to Philadelphia.  Both moves were surprising, with Ravens QB, Lamar Jackson, expressing his frustration with the news on Brown over Twitter.

With teams trying to make things work financially while having enough money to retain talent, targeting guys at that position in the draft is certainly the best way to do it.  This tweet by Spotrac probably tells the story best:

Jets Quietly Had a Productive Night

5) Looking around the rest of the Division, the Jets had a fairly good night on Thursday as they loaded up with some pretty solid talent.

They snagged Cincinnati cornerback Sauce Gardner with the #4 overall pick, followed by an explosive receiver in Wilson at #10 as well as a solid defensive player in Johnson II at #26.

Not a bad haul for second-year coach Robert Saleh, who injected some potential impact players into a group that is obviously coming off a disappointing season in 2021.

The Jets jumped up at the end of round one and fulfilled a promise to Johnson II, making a deal with the Titans to grab the #26 overall pick in order to do it.  They apparently told the Florida State standout that they’d go get him if they had the chance, and they ended up doing just that and Johnson II couldn’t be happier.

“It was awesome,” Johnson said via SI.com. “He said, ‘what did I tell you? What did I tell you when you left my office?’ I said, ‘that you guys would come and get me.’ And he was like, ‘and I didn’t lie, we came and got you. We’ve been trying to get you all night.'”

Needless to say, regardless of how people might feel about the Jets, all three are now defintiely a factor that will need to be taken into consideration when the Patriots face them in the coming years.