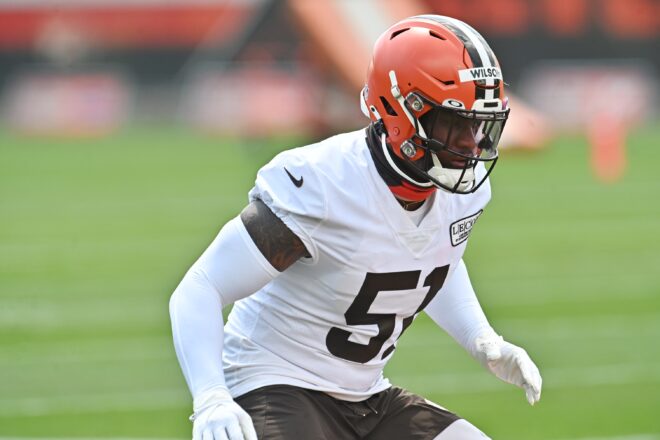 They say it’s not how you start but how you finish, and New England Patriots linebacker Mack Wilson has a big opportunity to finish out his rookie deal on a high note heading into 2022.

As we know, Wilson was part of the trade that sent Chase Winovich to the Cleveland Browns earlier this offseason and the hope is that he can be an impact player for a team in need of youth at linebacker. The 4th-year player was selected in the 5th round in the 2019 draft out of Alabama by the Browns, and he’s definitely an intriguing player.  He’s a fairly big guy at 6’1″, 240 pounds but what’s surprising about Wilson is how athletic he is.

He’s fast, running a 4.69 40-yard dash at his Pro Day as well as a 7.2 three-cone, which is impressive for a guy his size.  Much of the discussion following the Patriots trading for him was the fact he adds speed to a defense that Bill Belichick is clearly trying to transition to becoming younger and faster, especially after struggling down the stretch against more dynamic offenses.

Given Bill Belichick’s relationship with Alabama head coach Nick Saban, there were likely some discussions between the two on Wilson.  Greg Bedard of BostonSportsJournal.com pointed out in a recent column that one of the things that have hampered Wilson to this point is that he’s still a raw talent, with the former Tide linebacker having taken a fair amount of heat after coming out early.  The overall thought at the time was that he hadn’t quite progressed to the level some felt he needed to in order to be successful at the NFL level, albeit other issues haven’t helped his cause.

Wilson did exceed expectations after playing fairly well in his first season in 2019.  He appeared in all 16 games while totaling 77 tackles including 52 solo and a sack.  He also defended 7 passes, as well as picking off one pass.

That’s exactly what you want to see from someone with his athleticism, but he’s had a rough road since that first campaign.  Wilson suffered a knee injury during training camp the following preseason in 2020, which derailed that progress.  He would go on to play in 13 games that year but he admitted that the injury hampered him all season and he privately battled with a fair amount of frustration.

“That’s how down I was because mentally, we go through a lot as football players,” Wilson told reporters last preseason said via AL.com. “When I got hurt, it was one of my worst moments in my life. Just coming back, I never felt like I was myself. I didn’t feel like I was producing on the field. I couldn’t move like I wanted to. I was missing plays that I knew I should make. I was in a dark place basically.”

Wilson admitted that one of the biggest mistakes he made was rushing himself back from the injury, which he said “wasn’t the smartest idea” and he paid for it.

Things didn’t quite go his way either in 2021, with Wilson missing three games late in the season after testing positive for COVID-19 while also missing a Week 17 match-up against Pittsburgh due to “a personal matter”.  He was also among players rumored to be on the move at the trade deadline, but the Browns apparently didn’t find a deal they felt was worth pulling the trigger on.

He did play fairly well against New England last season during their Week 10 meeting at Gillette Stadium, with Wilson finishing second on the team in tackles that afternoon with 7, with Bedard pointing out on film one play where Wilson perfectly diagnosed a run down near the goal line before coming up and making the stop for no gain.

The former standout from Alabama seems to be happy about landing in New England as he also reunited with Mac Jones, who was a freshman during their time together.  After coming to Gillette Stadium and seeing how things are done, he’s glad to be a part of it and he’s looking forward to getting to work.

“I can feel the structure,” he told the Boston Globe recently. “I can feel the hard work in the atmosphere because I feel like everybody is just there to work. There’s really no goofing around, there’s nothing to play about. When you enter that building, there’s only one mindset and that’s to work.”

SEE WHAT OTHERS ARE SAYING IN OUR PATRIOTS FORUM

(EDITOR’S NOTE: Portions of the above appeared in our daily news/notes column.)