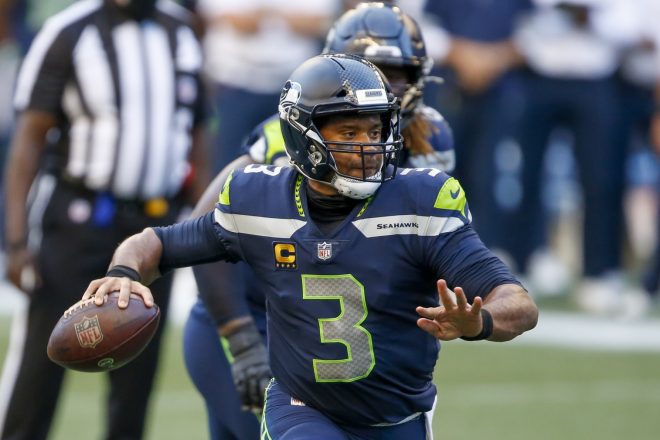 While Josh McDaniels may be in the middle of trying to get the Las Vegas Raiders back on track, one topic of discussion out West is centered around the Denver Broncos and Kansas City Chiefs, with newcomer Russell Wilson instantly changing the tenor of that rivalry.

Wilson comes to a Broncos team that has lost its last 13 meetings against the Chiefs, with Patrick Mahomes having accumulated a 9-0 record over that span (former Chiefs starter Alex Smith won the other four meetings).

Obviously, Wilson will be a player looking to change that.  Overall, he’s 1-1 against Kansas City during his career, with Wilson beating them in their most recent meeting with the Seahawks back on 12/23/2018 where he finished 18-of-29 for 271-yards and 3 touchdowns.

That rivalry essentially has reached where the New England Patriots and Buffalo Bills are right now as the Broncos look to try and grab a hold of a Division that has been dominated by Mahomes and the Chiefs in recent years. Kansas City has won that division every year going back to 2016.  The last time Denver won the AFC West was all the way back in 2015.

One of the biggest changes this offseason was the loss of Tyreek Hill, who Denver fans were thrilled to see exit their division when he was shipped off to Miami earlier this offseason.

And with good reason. Against the Broncos, Hill had racked up 492 yards receiving along with 5 touchdowns as a receiver, which made life extremely difficult.  He was also brutal in the ground game, having rushed for 131-yards and two touchdowns.

As a result, with Wilson at the helm and with what’s transpired this offseason, they suddenly feel like they have a chance to compete in a Division that previously felt out of reach. In fact, Wilson has already even played a part in free-agent decisions this offseason, including reportingly recruiting offensive lineman Randy Gregory as well as tackle Billy Turner.

That’s the benefit of having someone like Wilson on their roster. Guys typically want to go where they can both get paid and potentially be competitive. With Wilson on board, the latter is certainly more plausible than it was prior to his arrival.

Whether or not the balance of power will shift to Denver remains to be seen, but thanks to Wilson, they’re certainly much more optimistic than they were prior to this offseason.

Laughable ! Russell Wilson is no doubt a good QB, but he reside in the AFC West, the toughest division on football, meaning 6 games the Bronco’s are likely to lose.
IF Wilson moves the W/L of the Broncos in 22, I will eat my hat