The 2022 NFL Combine is in the books as is the early feeding frenzy of free agency. The offseason has seen an incredible amount of trades. And this morning while I was finishing up this mock draft, came the news that the Chiefs were shopping WR Tyreek Hill. Later it was confirmed that he’s going to the Dolphins for a boatload of pics.

So, this mock was in no way influenced by that trade, and wouldn’t have been regardless.

The team has plenty of holes to fill and for the 1,000th time, building a roster doesn’t happen overnight, the Patriots will continue to add players in free agency as well as the draft and will continue after the draft right up until and probably during training camp.

But it goes without saying, they’ll have to hit on their draft picks this year, much like they did a year ago.

One thing we didn’t do here was to make any trades, and we all know that Belichick loves to move around the board, so I think we’ll no doubt see something happen where the team has a pick in the 7th round. But for our purposes, unlike the first mock draft, this one didn’t have us making any moves (we moved back in that one).

So, here is our Mock Draft 2.0 Pre-Early Free Agency Edition: 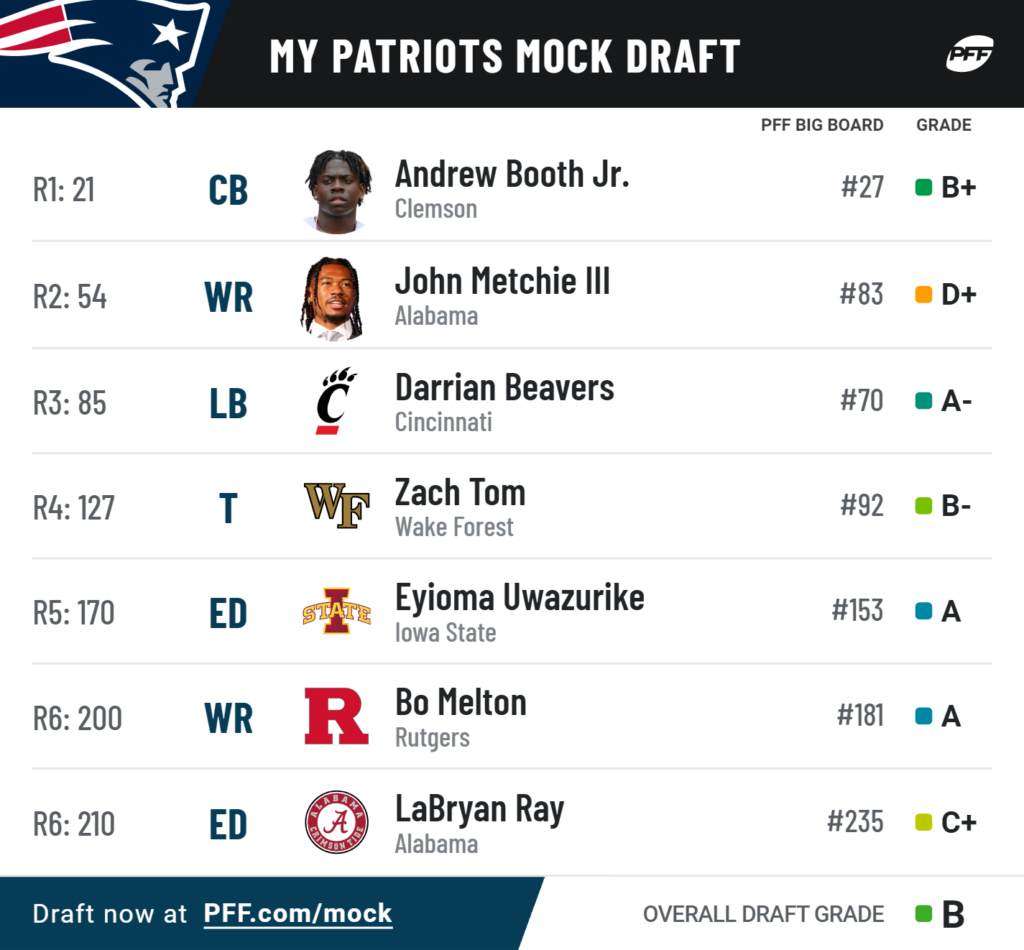 Booth brings an incredible amount of athleticism to the field and has that top dog mentality and swagger. To read the entire draft profile click here: From our draft profile on him that we posted earlier, “Booth is easily among the top five corners coming out in the draft in 2022, providing both the ability to play man coverage or zone, possesses the size, physicality, and aggressiveness to be excellent in run support.

Booth has the versatility to play out of the slot, although with Jonathan Jones back and Myles Bryant on the roster, the team wouldn’t need him to play there and would move him to the perimeter, which is a position of need.”

Metchie is my personal draft binky here, as his value would be more geared to 2023 than this year, as he tore his ACL in the SEC Championship Game in December. Metchie had a very productive year with Mac Jones in 2020, catching 55 passes for 916 yards and 6 TDs.

Metchie would be that slot/”Z” WR who would open up all kinds of room in the passing game. He has outstanding separation skills on both vertical and horizontal routes, making defenders defend every blade of grass.

Metchie met with the Patriots in Indy at the Combine, and said the meetings went “very well.” He had this to say about Mac Jones: “Mac and I are really close,” Metchie said. “He was my quarterback that year (2020), so Mac and I got along really well. We also spent a lot of time together my freshman year on the two team, so we have a lot of chemistry.”

Beavers has the size (6’4, 252), that the Patriots like in their outside backers. But it isn’t just his physically imposing frame that is enticing for coaches at the next level. He possesses a tremendous football I.Q. and the versatility that will make him an intriguing player at the next level.

He has the physicality to set the edge in the running game, and due to his time as a defensive end, has the ability to rush the passer, with an array of moves in his toolbox. He is good in coverage and had a very good week, covering tight ends at the Senior Bowl.

Tom played left tackle for the Demon Deacons the past two years, but he’s undersized for playing tackle in the NFL at 6’4, 304. He’ll probably become an interior lineman in the NFL, playing guard and filling in at center when needed.

He was solid in pass protection and possesses good athleticism for the position but he could improve in the running game with some added bulk and more physicality at the point of attack.

Uwazurike (don’t ask me to pronounce it), has good size (6’5, 316) to play DE in the Patriots 3-4 base system. He moves well for a big man and his athleticism allows him the versatility to play outside on early downs and kick inside as an interior pass rusher on passing downs.

That versatility means he can play anything from a 0-5 technique. He has an explosive first step out of his stance but can get washed out at times in the running game.

It was a surprise to still see Melton on the board this late. I was actually looking for Slade Bolden here, but Melton was too good to pass up. Melton has only average size at 5’11, 190 but what stands out about him is his athleticism. He ran a very fast 4.34 in the 40 at the combine while turning in a time in all-important (for NE) 3-Cone Drill of 6.98.

He’s an efficient route runner who uses leverage to get separation. He led Rutgers with 55 receptions for 618 yards and 3 TDs, but was hampered by poor QB play. Rutgers coaches raved about his work ethic and leadership.

Ray has been bitten by the injury bug but possesses the size and length (6’4, 283) to play on the edge in the NFL. He came to Tuscaloosa as a highly regarded recruit but his injury history derailed his college career.

However, he was productive when he was on the field and will project to be an edge setter in the running game but will need to work on his pass-rush skills. But a Nick Saban prospect is worth a late 6th round flyer on.