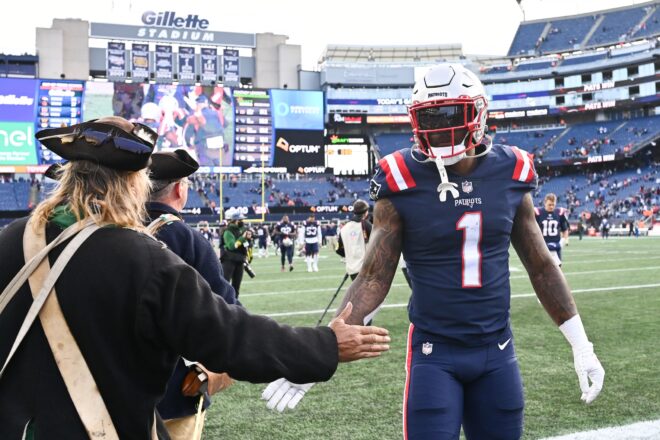 (Editor’s note: Part of this originally appeared in this morning’s “Five Things to Know” column)

While was watching Brian Flores’ interview last night on “I AM ATHLETE”, one thought I had was thinking about comparing two disappointing seasons when it came to previous Patriots players and trying to figure out who was more frustrating to watch, Harry or Chad Ochocinco’s 2011 campaign with the team?

At first glance, their numbers were similar.  Ochocinco finished that season with 15 catches for 276-yards and one touchdown, while Harry caught 12 passes for 184-yards.  Obviously, the two players are quite different, with each having some strengths that make up for their respective weaknesses.  Harry is stronger and holds an edge as a blocker because he’s physically more imposing than Ochocinco, but Ochocinco was a considerably better route-runner yet for whatever reason, he struggled catching the football as well as getting a grasp of the offense.

The latter problem has also plagued Harry, who was often late getting off the ball as he constantly looked uncomfortable and was even spotted at one point during the season being told where to line up by a rookie quarterback.

Ochocinco caught a similar ire from former Patriots QB Tom Brady, who was here during the receiver’s lone season with the team.

As we know, Ochocinco is without a doubt the overall better player given the terrific career he had during his best years in Cincinnati.  But when it comes to a one-season view, he ended up just being a bad fit after the Patriots happened to get him in what would be his final NFL season.  Meanwhile, Harry is in his prime, which is what makes the entire situation that much more frustrating.

Ochocinco has said before that in Cincinnati, things were simple and he could just play.  Here, there was a lot more that went along with it, which he said made things tough and contributed to his struggles.  He’s since gone on to say nothing but positive things about his time with Bill Belichick and the Patriots, with the former receiver reiterating during the episode Tuesday night how different it was and the excellence New England’s franchise operates with.

As for Harry, maybe the grass will be greener for him elsewhere.  Either way, the fact he’s even in a “who was the worse player” conversation isn’t a positive, but I thought the parallel is interesting because Ochocinco’s inability to be an impact receiver that year definitely hurt them and potentially held back what could have been a better finish to that season.

With Ochocinco, it was a bad fit at the wrong time.  After one more year full of similar results, that’s how it feels with Harry now as well.