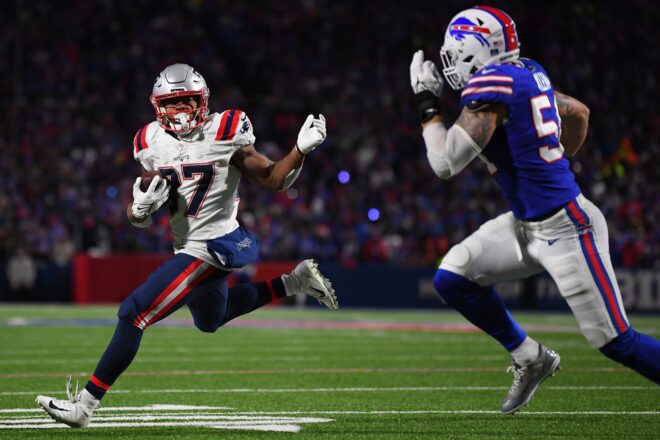 Not a whole lot went right for the Patriots during their wild-card loss to the Buffalo Bills Saturday night, but NFL Films cameras did manage to find one positive moment from the team sidelines.

In a video featured on the “Inside The NFL” program, NFL Films captured running back Damien Harris and longtime running backs coach Ivan Fears having a heart-to-heart embrace presumably late in the contest.

“Yessir. Thank you for everything. I love you, too.”, Harris replies.

Under Coach Fears, Harris improved over his third pro season to become the Patriots lead running back, rushing for a career-high 929 yards and 15 rushing touchdowns (second in the NFL) in 15 games played.

Take a look at the full moment for yourself here courtesy of this tweet from WBZ-TV’s Dan Roche.

Think a Coach can have a lasting impact on a player? Ivan Fears answers that right here!

Coach Fears has been a mainstay with the Patriots organization for 25 of his 31 years in the NFL, coaching the running backs since 2002.

As of this time, it remains to be seen if this video indicates an impending retirement for Fears who turned 67 in November.

Prior to the matchup with the Bills, Fears said the following when asked about his future plans.

“I have one plan in my mind right now, one-track mind, and that’s the Buffalo Bills and this playoff game. After that, who knows?” Fears said. “Hopefully we’ll be still playing and that’s what it’s all about. I am not thinking about anything else, nor planning anything else at this time.”

Should Fears elect to retire, he’ll join Ernie Adams and Dante Scarnecchia as recent longtime Belichick staff members to call it a career.