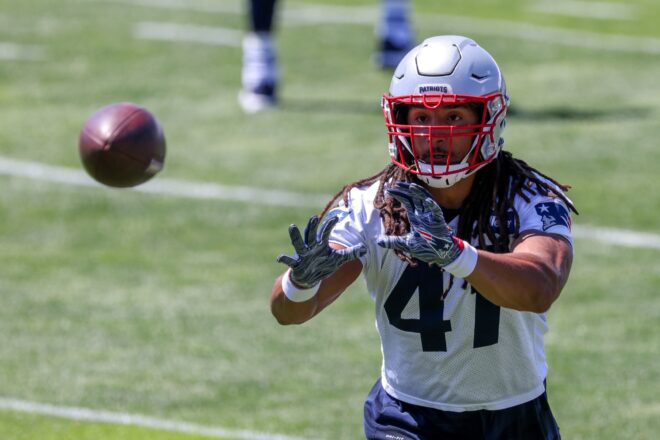 On Tuesday, New England Patriots Chairman and CEO Robert Kraft made a special, surprise appearance at the Gillette Stadium press conference podium to honor fullback and German-native Jakob Johnson for reaching the 1,000-snap threshold in his NFL career.

Johnson first joined the Patriots organization by way of the NFL’s International Player Pathway Program. His milestone marked the third player from the program to reach 1,000 career snaps.

“For years, the NFL has been trying to expand to international markets, and we try to recruit international talent,” Kraft said. “I love this program, especially over in Europe because since we’ve gone outside the U.S., we’re 3-0. So, I want to keep that happening. In our history, dating back to the 70s we’ve had John Smith at kicker, then, of course, Sebastian Vollmer joined us and spent eight years, and now Jakob Johnson.

“A number of these players have gone through this program that we call the International Pathway Program. … A couple of years ago I remember a couple of coaches here talking about Jakob and saying he’s not very good, and look where he is today. Look what he has done. He’s worked hard, he’s really gotten the respect of everyone, he’s had such progress.”

Kraft then presented a game ball to Johnson.

You can watch Kraft’s full presentation at the link below.

Since his promotion from the Patriots practice squad in 2019 and the retirement of James Develin, Johnson has taken over the starting fullback role for the past two seasons.

Last season, Johnson scored his first career NFL touchdown becoming the first player from the International Player Pathway to do so.