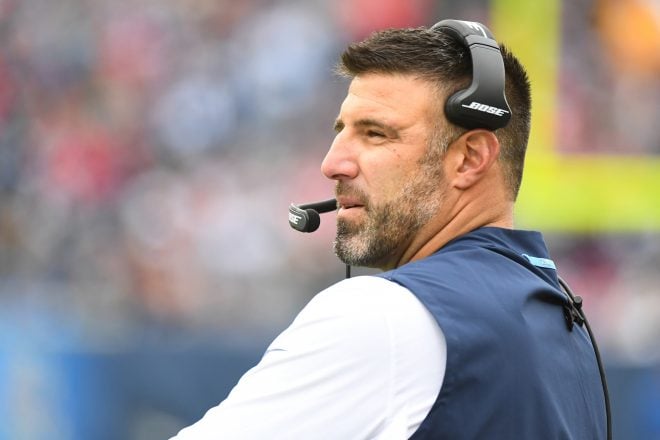 The Titans are led by former Patriot Mike Vrabel and expect anything from the smart Vrabel in this game.  The team sits atop the AFC with an 8-3 record.  This is very deceiving since their last game was a loss at lowly Houston Texans.   Injuries have had a major impact on the Titans.

I can’t believe the Titans are a 1st place team.  They are a completely different team without Derrick Henry.  Here are the rankings of the Titans Offense (including the contribution of Henry).

QB – It’s all on Ryan Tannehill now that his weapons have been stripped away.  Tennessee is hurting from injuries, especially on the Offense.  No Derrick Henry, Julio Jones has been in and out of the lineup as has been AJ Brown.  Brown is listed as Questionable for Sunday and didn’t practice Tuesday or Wednesday (they have Thursday Thanksgiving off). They just added Golden Tate to their WR group.

Tannerhill played very poorly against Houston with a 4 Interception game.  He leads the league in interceptions with 12 against 13 TD passes.  The big number that stands out is the number of sacks he has taken, 31 times, tied for most in the league.  This number surprises me because Tennessee has a good O-line.

Back-up QB Logan Woodside is also out for Sunday.  He was put on the COVID-19 list on Wednesday and if he doesn’t clear protocol by Sunday he will be out.  Kevin Hogan is on the Practice Squad and would be brought up to fill in.  He is the former Stanford Cardinal QB from 2012 – 2015 and was a 5th round pick of Kansas City in 2016.  He has bounced around the league playing for several teams.

OL – This is a good group that is having a bad season.  Left Tackle Taylor Lewan, the 8th year veteran out of Michigan is the anchor of the line.  He was the Titans’ 1st pick, number 11 overall in 2016.  He made the Pro-Bowl from 2016-2018, but none since.  His play has diminished.  Rodger Saffold is the starting Left Guard.  He is an 11 years veteran drafted by Los Angeles Rams in the 2nd round.  He is a steady influence on the line.  Saffold was the starting guard for Los Angeles Rams in Super Bowl LIII against the Patriots.  The Center position is manned by Ben Jones a 10-year veteran and a former Georgia center.    Nate Davis is the starting Right Guard but has missed two games in a row and threatens to miss his 3rd against the Patriots. He is suffering from a concussion.  Davis was drafted by Tennessee in 2019 out of Charlotte.  He was born in York Maine.  Backup Guard is Dillon Radunz, a highly rated 2020 draft pick from FCS North Dakota St.  The Right Tackle is David Quessneberry.  He was drafted by Houston in 2012 and has bounced around the league.  Tennessee signed him to their Practice Squad in 2018 and he has moved into the starting lineup.  He is very susceptible to the pass rush.

RB – Derrick Henry is out for the year.  Backup Jeremy McNichols hasn’t done the job.  They went out and signed D’Onta Foreman.  Nichols has rushed 18 times for 69 yards (3.8) and no TDs in 10 games.  Foreman isn’t any better running 23 times for 84 yards (3.7) and no TDs in 3 games.  This lack of production in the run game makes the Titans one-dimensional.  It won’t help they are facing the stingiest Defense in the league (#3) and #8 versus the run.  The Titans released Adrian Peterson this week.  They were hoping he had something left in the tank, but that battle was won by father time.

TE – Anthony Frisker isn’t listed as the top TE but he has been in my book.  He has 19 catches on 27 targets for 138 yards (7.8) and no TDs.  Do you think they miss Jonnu Smith?  Geoff Swaim is listed as the starter but he was a DNP, recovering from a concussion.  Mycole Pruitt has 11 catches on 12 targets, but he is more an H-back than pure TE.

Titans Defense ranks 14th overall, 4th against the run, 24th versus the pass, and 19 in scoring.  Injuries have ravaged the defense as well.

DL – Jeffrey Simmons mans the LDE position and has 7 ½ sacks. Simmons leads the DL in tackles with 39, 31 solo.  The 3rd year pro out of Mississippi State is 6’4”, 304 lbs.  He has 10 tackles for loss and 4 passes blocked.  He is someone to account for.   Teair Tart is listed as the Nose Tackle, did not practice on Wednesday, and is listed on the injury report as Questionable.   Tennessee did not make a report for Thursday, so Friday’s report will be a better indicator.  His backup Naquan Jones is also questionable.  If they have to go to the third-stringer Kyle Peko, the Patriots should have a field day with him.  He has been a JAG bouncing from team to team over his 3-year career.  At 6’1”, 305 he is small for the NT position.  RDE is Denico Autry has 29 tackles and 5 sacks.

LB – all four starters are listed as Questionable.  Weakside Linebacker Harold Landry from Boston College is second on the team in tackles with 59 and has 10 sacks.  He was Limited in practice on Wednesday.  Left Inside Linebacker David Long Did Not Practice.  He leads the team in tackles with 63.  Right Inside Linebacker Rashaan Evans was having a good year with 37 tackles in 7 games, but missing 4 games has put a strain on the defense.  Rookie Monty Rice from Georgia is the prime backup.   He is a bit undersized for the position.  Strongside Linebacker Ola Adeniyi was also a no-show in practice.  They signed former Patriots Johns Simon and it looks like he will see considerable time on Sunday.  We all know that will not end well.   Bud Dupree is on IR.

DB – The secondary has talented players when the front 7 is putting pressure on the QB.  However, the numbers say they are not getting the job done.  Left Cornerback Janoris Jenkins is a 10-year veteran, but at 33 he may have lost a step.  He is third among DB’s with 42 tackles.  Amani Hooker is a third-year Safety from Iowa.  He has only played 6 games.  Despite missing time, he has 39 tackles.  Kevin Byard is the Free Safety and he leads the DB’s with 52 tackles and 5 Interceptions.  The starter at Right Cornerback is listed as Kristian Fulton who has only appeared in 7 games with 21 tackles and an interception.  Elijah Molden who has 42 tackles and one interception is the backup that should see plenty of time in a nickel set.   Dane Cruikshank saw considerable time in 6 games but he has been put on IR.

Veteran kicker Randy Bullock has been signed to replace Sam Ficken who was put on IR.  In 10 games Bullock is 18 of 20 on FG attempts and 28 of 30 on XPs.   Brett Kern is the punter and is averaging 41.6 yards net on his 24 punts.  He has 10 punts inside the 20. Kern is also the holder now that Logan Woodside is out.  Chester Rodgers has taken over the Punt Returner duties and in 7 returns is averaging 16.3 yards per punt return.  If he had enough returns to qualify, he would be second in the league ahead of Gunner Olszewski.    Marcus Johnson was handling the Kick off returns and doing a fine job with a 19. 9 average, that is until he hit IR!  Now Dontrell Hilliard and Chester Rodgers are handling this job.  Hilliard is doing better in limited action.  I expect the Patriots Special Teams to shut them down and put Tennessee in bad field position.

Analysis –  I expect Tennessee to play like a desperate team.  That means we should see all the trick plays and exotic defenses.  Mike Vrabel is a smart coach and has had success against Bill Belichick.  I expect all types of blitzes against rookie Mac Jones.  That is how to disrupt him and put the Patriots in long down and distance.  If the Patriots Offensive line can give Jones the time he could shred the Titans’ defense.

Injuries – Injuries on both sides will make a difference.  Trent Brown and Christian Barmore missed practice yesterday.  That is something to monitor.