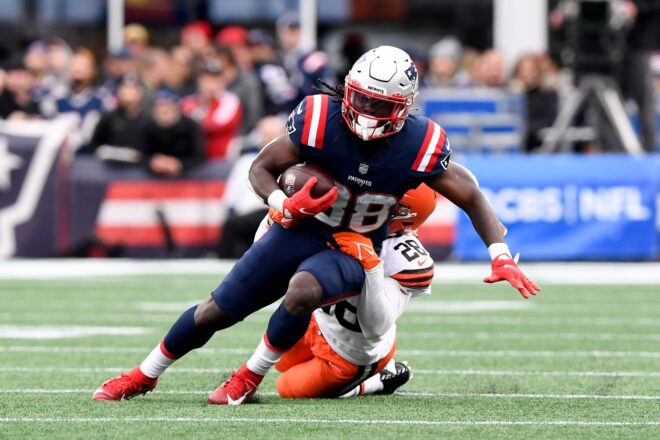 The Patriots owned 3rd down on both sides of the ball.  On Offense, they converted 7 of 8 in the 1st half, 5 of 6 were passes, 1 run, and another on a Defensive Pass Interference.  On Defense, they owned the Browns holding them to 1 for 11.  This was an old-fashioned shellacking.  The Cleveland Browns are frauds.  They are supposed to be the #3 Defense overall and especially against the run.  Today they gave up 184 yards rushing.  Rhamondre Stevenson, who didn’t practice all week, had a coming-out party with 100 yards rushing and two TDs.  The Offensive Line dominated the D-line and LBs of Cleveland.

READ NEXT:
The Gauntlet – The Patriots’ Toughest Matchups Down the Stretch
Posted Under: 2021 Patriots Season

Good stuff as usual Mark. Feels like Jones is getting in sync with his targets (all of them, which is nice) and the play calling (except the usual run off tackle on 1st that usually fails) has been more varied and advantageous. Balanced is the word that comes to mind. Running enough to make them fear the run, passing well enough to make them fear the out routes, ST doing their job, I like the way this team is growing. And #10 continues to advance and shine.