Thursday marked Veterans Day across the country and some current and former members of the New England Patriots along with the team made sure to honor those who served in America’s armed forces with some special tributes across their social media accounts.

Additionally, during his press conference Thursday, wide receiver Kendrick Bourne revealed Joe Cardona and Malcolm Perry addressed the team about the meaning of Veterans Day, both are graduates of the United States Naval Academy.

Patriots long snapper Joe Cardona, a lieutenant in the Navy, addressed the team about Veterans Day and later shared more on the experience with members of the media. pic.twitter.com/P5FFIdajI7

You can take a look at some of the best messages and photos below. 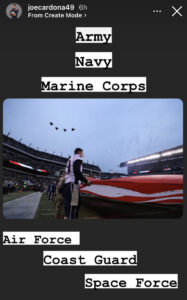 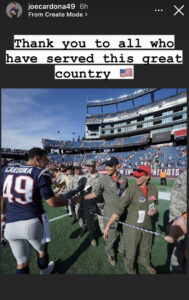 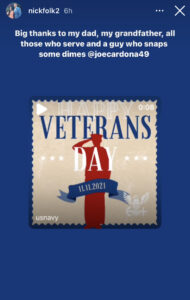 Happy Veterans Day to the men and women who have committed their lives for the betterment of this republic. Though we honor you today, we acknowledge and appreciate your service daily. May the Lord bless and keep you as well as all those you hold dear.

I'm thankful for all the members of our military who have served and sacrificed so much for our nation. We honor you today! #veteransday pic.twitter.com/1zq2LNd7wQ

33 years after his parents came to America, my father filed his draft card. A year later, he joined the Army Air Corps to do his part to defeat fascism and preserve democracy. Thanks to all who’ve done the same, whatever your background, serving the country we love. #VeteransDay pic.twitter.com/Qgfi9vEzpX

It's important to have perspective. To take a minute to appreciate how good we actually have it. And we have only our Veterans to thank for that. #HappyVeteransDay pic.twitter.com/3NF69PPqe8

Wishing a Happy Veterans Day to all who served. A special shoutout to my grandpa Joe Cassel, who was awarded the Distinguished Flying Cross for his valiant actions in the European Theatre during WWII, and my grandpa @USArmy veteran James Brennan still going strong at 98. pic.twitter.com/k84tTFbTnr

The Kraft family & @PatsFoundation honored service men & women from the Vietnam War during a special pinning ceremony this #VeteransDay at @GilletteStadium. pic.twitter.com/hVL24QzI7m

"We're proud of Joe…and all he does off the field to make our community better."

Before this week’s #SaluteToService game, the @PatsFoundation is recognizing local active duty service members on banners displayed around @PatriotPlace. pic.twitter.com/t8rsjH2xSu