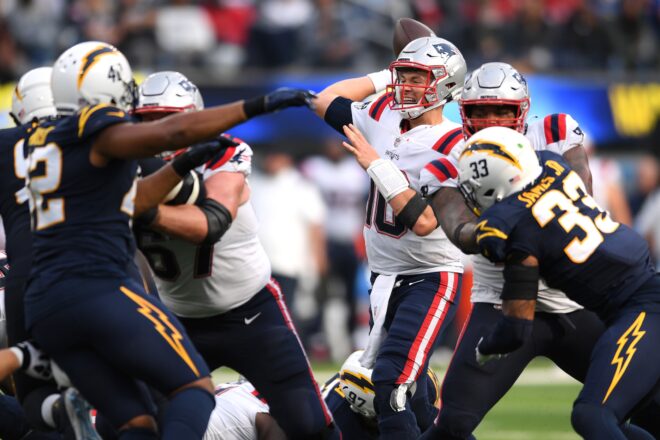 One of the burning questions coming off of Sunday’s win out in Los Angeles is how in the world Chargers defensive end Jerry Tillery wasn’t flagged following a ridiculously late hit on Mac Jones in the second quarter?

Prior to the play, New England was about to attempt a 4th-and-1 play from the Chargers’ 1yd line.  Instead, Los Angeles called a timeout, leading to the officials to all start blowing the whistle right as the Patriots snapped the football.

You can see in the video that everyone more or less came to a complete standstill, including Jones, who can be seen standing holding the football.

However, Tillery keeps going 100%, barreling around left tackle Isaiah Wynn before lowering his shoulder and drilling Jones, who got slammed to the turf.

Center David Andrews immediately came over and the two started exchanging words, with New England’s offensive line also getting in the mix.

After he gets back up, Jones can be seen trying to wave off his players, likely knowing that any type of penalty would move them back and only make a difficult situation that much worse.

Mac Jones gets destroyed after a dead ball whistle pic.twitter.com/GL8OgLVVzd

Watching it in real-time is one thing, seeing the replay (click the video below), especially in slow motion, makes you realize that Tillery clearly had no intention of slowing down.  He claims he didn’t hear a whistle and was “finishing the play”, yet he’s the only one out of his other 10 teammates who decided to make that decision.

“Yeah, I heard a whistle,” said Andrews when asked about it.  “I mean, I think 22 other guys, 21 other guys, heard a whistle, so I didn’t take too kindly to that.  I thought that was kind of a BS play, but it is what it is. Mac’s a tough kid, shows a lot of poise each and every week standing in there.”

Unfortunately, the officials never ended up calling any type of flag on the Chargers, despite the fact it appeared to be an obvious penalty.  Instead, the referees eventually broke things up before play finally resumed.

To make matters worse, and to add insult to what fortunately wasn’t an injury, the Patriots missed the pass attempt to Meyers on the ensuing play and turned it over on downs.

Thankfully, New England ended up walking away with what really mattered, and that was a victory that evened their record at 4-4 while dropping the Chargers to 4-3 on the season.