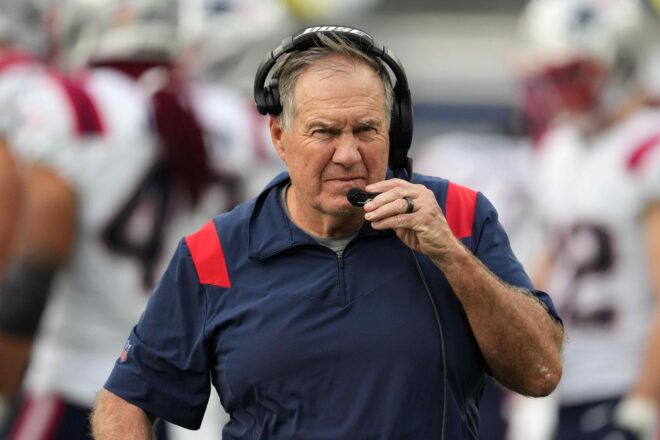 INGLEWOOD, Calif. — Mac Jones finally looked like an NFL rookie, and the rest of his team literally picked him up.

Jones seemed like he wanted to do more out there than he has done in past weeks, either that or Josh McDaniels picked this week to open up more of the playbook. The result was a lot of overthrows and flustered moments amidst a lot of pressure from the Los Angeles Chargers’ front seven. But in the end, it was the running game and the defense which carried the day for Jones and the Patriots.

Nick Folk was perfect on field goals all afternoon, and his 30-yarder with 3:16 left gave the Patriots a winning cushion. The Patriots wound up holding on for a 27-24 win over the Chargers at SoFi Stadium in Inglewood, Calif. The Patriots are now 2-0 against the Chargers in this building (they won 45-0 last year in this new football palace), and the predicted large throng of Patriot fans at this game went home (and for many, that’s where home is) very happy.

A pick-six by Adrian Phillips gave the Patriots a 24-17 lead early in the fourth quarter, as Justin Herbert badly misfired on a right flat pass to Jared Cook. Phillips snared the pass, fell down, got up and scampered 26 yards for the score. The play was the highlight of an otherwise great day for the defense, who basically did a nice job in containing Herbert, Austin Ekeler, Keenan Allen and all the other elite offensive weapons the Chargers have.

The containment of Herbert was a major key to the Patriot win. Herbert finished 18 of 35 passing for 223 yards, two touchdowns and two interceptions (Phillips had the other also, late in the second quarter). Herbert finished with a 66.7 passer rating and was sacked three times. Allen and Ekeler had six catches each, but no pass catch went for longer than 11 yards on the afternoon.

The running game for the Chargers was more effective. The Bolts had 163 yards rushing as a team and an 8.2 yards per carry average, but that number is skewed by a 75-yard run by Justin Jackson in the second quarter. Jackson had only three carries, whereas Ekeler had 64 yards on 11 carries and a 5.8 average. His five-yard touchdown run early in the game smacked of LeGarrette Blount in his Patriot heyday, carrying 5-6 tacklers into the end zone to give the Bolts an early 7-0 lead.

But beyond that, the Chargers really never dominated the Patriot defense again. The final score was close only because Herbert was able to find Jalen Guyton for 18 yards on third and 18, and then Joshua Palmer for a 24-yard touchdown pass to cut the final margin of victory to three points. Both passes were defended by Jalen Mills, who continues to play mostly uneven and is susceptible to getting picked on.

Jones had perhaps his worst game as a pro, even though the Patriots won the game. Jones finished 18 of 35 passing for 218 yards, no touchdowns or interceptions and a rating of 70.9. Many of his throws were overthrows, and he seemed to look uncomfortable amidst the Chargers pass rush. There were times in the red zone where it seemed that he was more interested in getting Jakobi Meyers his first NFL touchdown (he would catch a 2-point conversion later) than getting a touchdown at all, and at times McDaniels made some weird play calls inside the Chargers’ 10-yard line. But Jones was never picked off and in the end managed the game well enough to win.

Penalties again came up and bit the Patriots in the ankle on a few occasions. The Patriots were penalized only four times for 30 yards, but two of those penalties cost Damien Harris 51 yards rushing and a touchdown. In the third quarter, Harris ripped off a 28-yard touchdown run, but it was called back on a holding call by Justin Herron which was a ticky-tack call after seeing the play on replay. Later in the third quarter, Harris ran a beautiful 23-yard left end run, but Isaiah Wynn was guilty of holding at the point of attack. Harris still managed 80 rushing yards on 23 carries (a 3.5 average) and a touchdown.

What makes this win so nice is that the Chargers are a quality opponent, and the Patriots beat them on the road, and the Patriots won despite a substandard game by Jones. If not for the New York Jets, the Patriots would be an abysmal team over the last 12 months. But the Patriots finally looked like the winning franchise they have been over the last several years, and they give their fan base hope that this year might actually have a better ending than perhaps many observers might have thought earlier.

The Patriots head to Charlotte, North Carolina next week to face the Panthers, a team that gives them troubles over the years. The Patriots will get to see old pal Stephon Gilmore at cornerback, who started his first game as a Panther on Sunday. They will face a quarterback they have beaten before in Sam Darnold, who is in the hot seat and who once said that he “saw ghosts” in a loss to the Patriots. The game will be a week after Halloween, but the Patriots will still take another ghost sighting by the beleaguered Panther quarterback.

The Patriots have some winnable games coming up before they have to face Tennessee and then Buffalo twice over a four-week period. There is plenty of time for the Patriots to fully establish themselves as a playoff team and to continue to work on what still ails the Patriots. Jones is incredibly self-critical and is fiercely dedicated to improvement and spending time at the workplace. This is slowly becoming a Patriot team similar to past seasons, one that “evolves” over the season rather than one that clicks right off the bat from Jump Street.

Meanwhile, a lot of very happy Patriot fans can head out to their favorite SoCal bistro and enjoy dinner and drinks tonight, and raise glasses to their favorite team. Whenever a Boston area team comes to the Southland, the large contingent of fans come out. The Angels, Clippers and Kings all know that. The Chargers perhaps wish today that they were back in San Diego, because Patriot fans are louder in Los Angeles than they were in San Diego.

And they need to be extra loud next week in Carolina, whoever shows up to root for the visitors.