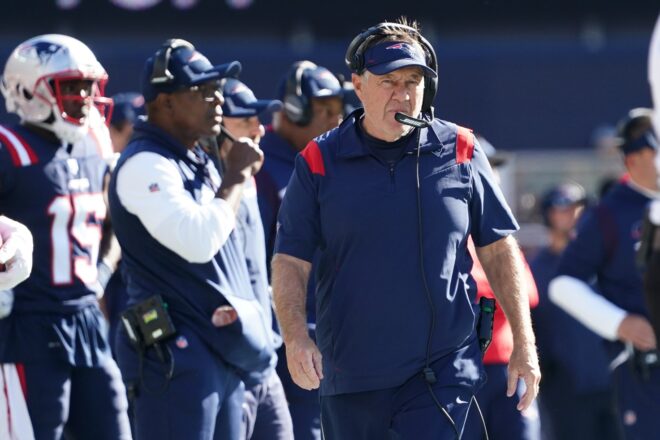 But it was still a win that will make Patriot Nation very happy for the coming week. Mac Jones threw for over 300 yards for the first time in his career, both Damien Harris and J.J. Taylor had two rushing touchdowns each, and the Patriots won their first home game of the season with a 54-13 clobbering of the awful New York Jets on Sunday at Gillette Stadium. The Patriots improved to 3-4 this season, and showed a glimpse of what they are capable of for the rest of the season.

And yes, dropping 54 points on the Jets is nice, but it must be tempered by the fact that the Jets are still one of the NFL’s biggest bottom feeders. The Patriots scored the most points against the Jets since a 56-3 win at Schaefer Stadium in 1979. They hit the Jets early with a touchdown on a double pass, and finished it with two touchdowns from a running back who is a typical “August player” in Taylor, who has somehow managed to stick around with the team this long.

The Patriots hit the Jets early and often. On their first drive they went 65 yards in just four plays. A 28-yard screen pass to Jonnu Smith begat the first of several gadget plays of the day. Jones threw a backward pass to Kendrick Bourne in the right flat, then Bourne hit a wide open Nelson Agholor along the right sideline for a 25-yard scoring pass. It was reminiscent of the double passes worked by Tom Brady and Julian Edelman, the latter having been a quarterback at Kent State.

On their second drive, they drove 53 yards in seven plays. Harris had five of the seven touches, including a 32-yard run off right tackle. Harris finished it with a one-yard run off left tackle. The third drive ended in a 39-yard field goal by Nick Folk which featured a nice 24-yard lob pass to Smith. It was 17-0 Patriots early in the second quarter, and a blowout seemed inevitable.

The blowout came, but the complexion of the game changed on a strange play early in the second quarter. Kyle Dugger was called for pass interference on a deep end zone throw to Keelan Cole, but it was the last throw of the day for Zach Wilson. Wilson left the game with a knee injury and would not return. Mike White took over and three plays later hit Corey Davis for a 3-yard score.

Jones answered right back and took the Patriots on a 12-play, 73-yard scoring drive. Jones finished it off with a nice 15-yard screen pass to Brandon Bolden off a play fake to Harris which he took into the end zone and a 24-7 Patriot lead. The next possession went 72 yards in 11 plays, with Hunter Henry celebrating National Tight End Day with a one-yard catch for a touchdown that made it 31-7 Patriots at the intermission.

The rest of the game was simply trying to prevent the Jets from quick strikes. The Patriot defense gave up a lot of short passes underneath, and White was able to throw for 202 yards and a touchdown. Jalen Mills, who gave up several damaging receptions in the loss to Dallas last week, continues to get picked on and give up several passes, but against the Jets they weren’t as consequential as last week. Dugger and J.C. Jackson had second half interceptions which helped to keep the score down.

The Jets did get one touchdown in the second half, an end around run by Elijah Moore for 19 yards which made it 31-13 on their first drive of the third quarter, another case of the Patriot defense not being fully into it just after halftime. But that was all the Jets would get, as the two interceptions and a nice pass knockdown by Deatrich Wise Jr. on fourth down shut down the next three Jet drives.

The Patriots scored a fourth-quarter touchdown when Harris ran it in from three yards out, then scored again with Taylor on a one-yard run just following a nifty 46-yard bomb from Jones to Bourne. Brian Hoyer came out and ran the offense for the rest of the game, and got in on the fun when he led still another scoring drive capped off by Taylor’s second one-yard scoring run to push the score over 50.

If there is anything the Patriots should be concerned about over the course of this game, it was a backup quarterback able to make some hay against their defense. In the end the defense never broke, but the Jet receivers, especially the running backs, were able at times to find open areas in short ranges. Michael Carter and Ty Johnson led the Jets with 14 aggregate catches for 132 yards total. Whereas last week the Patriots were bedeviled by crossing routes from Cowboys receivers, in this game White was able to find receivers on slant routes. But in the end, the Patriot defense made big plays when it had to.

Jones was 24 of 36 passing for 307 yards, two touchdowns and a 111.7 passer rating. Jones’ top receiver was Bolden, who had six catches for 79 yards and a touchdown. Bourne had four catches for 68 yards. Harris had another 100-yard game, rushing for 106 yards on 14 carries and a 7.6 average per carry. Taylor’s appearance in this game meant that Rhamondre Stevenson was again a healthy scratch despite a good game last week against Dallas. It continues to confound Patriot followers as to why Stevenson still gets sat in favor of Taylor or Bolden.

White finished 20 of 32 passing 202 yards, one touchdown, two interceptions and a 64.8 rating. Carter was also the leading rusher with 37 yards, as the Patriots generally did a terrific job of keeping the Jet rushing attack at bay. Wilson was 6 of 10 for 51 yards before leaving the game with the knee injury.

The Patriot defense will be tested next week against the Chargers out in Los Angeles. Despite a 45-0 win last year by the Patriots at SoFi Stadium, the Chargers are better offensively than they were last year when Justin Herbert was a rookie. The Chargers will have plenty of offense for the Patriot defense to deal with, and if Herbert picks on Mills as has been going on often this season, Jones will be in another shootout and will perhaps be tested in the fourth quarter if the team is behind or if it is a “last team with the ball wins” type of game.

But this win will feel good, and it will put the Patriots in a good frame of mind as they prepare to make a ton of California Patriot fans happy next Sunday.

READ NEXT:
5 Thoughts on the Patriots Blowout Win Over the Jets
Posted Under: 2021 Patriots Season