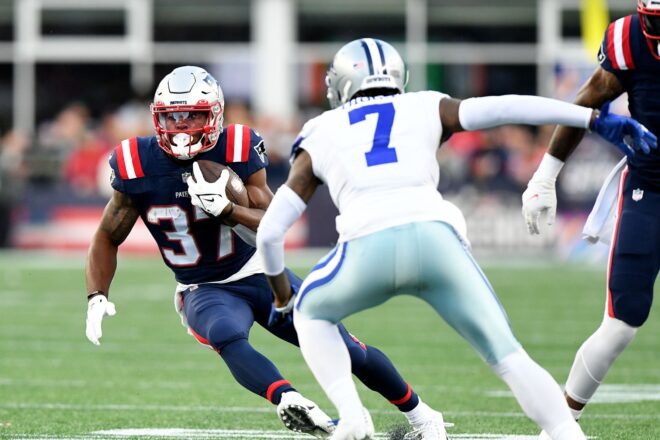 FOXBOROUGH — It seems that some day, the Patriots will re-learn how to win games like this.

The raw numbers aren’t flattering. 2-4 for the season, 0-4 at home. The Dallas Cowboys finish with 567 total yards of offense. Dak Prescott finishes with 445 yards passing. In overtime, the Cowboys hold the Patriots to four and out, and Prescott comes back with an 80-yard touchdown drive without breaking a sweat. Dallas outlasted the Patriots 35-29 on Sunday afternoon at Gillette Stadium, and the losing continues for this Patriot team that expected much better than this.

Despite the disparity in offensive numbers, the Patriots actually led 29-26 with 2:05 left in the game. The Cowboys had two touchdowns turn into an end zone interception and a Prescott fumble at the goal line. Dallas committed 12 penalties for 117 yards. This was a game that the Patriots would have closed out in earlier years, and this current bunch of Patriots simply need to learn how to win games against good teams, and more specifically close games against good teams.

The fourth quarter was dizzying, to say the least. A 45-yard field goal by Greg Zuerlein made it 20-14 Dallas. The Patriots took over and drove 75 yards in 13 plays, most of it on the ground. Damien Harris had a 21-yard run where he dragged 4 Cowboys with him for about 7-8 yards. Rhamondre Stevenson finished it with a one-yard TD run to give the Patriots a 21-20 lead.

The ensuing Dallas drive left head coach Mike McCarthy vulnerable to second guessing if Dallas had lost the game. Dallas drove to the Patriot 32 yard line, facing fourth and one. The Cowboys were 2 for 4 on fourth down at that time, but McCarthy elected to go for a 51-yard field goal instead of going for it. Zuerlein yanked the kick wide left as Gillette Stadium exploded in celebration.

There was 2:34 left in the game. Dallas had two timeouts and the two-minute warning. Three first downs win the game. But Harris was stuffed for no gain, Mac Jones was called for delay of game, and then a play which should have broken the Patriots’ back.

Jones tried to hit Kendrick Bourne over the middle on a slant route where running the ball to burn clock or Dallas timeouts was the more prudent strategy. Bourne tried to make a grab of the pass which was led a little far and the ball deflected to Trevon Diggs. Diggs made the pick and scooted 42 yards for a pick-six and a 26-21 lead. The Cowboys went for 2 but Tony Pollard was stuffed short of the end zone.

This actually turned out to be good for the Patriots, in that they could run clock, and win the game with a late touchdown. But instead, Jones showed everyone something that they need to remember as this burgeoning NFL star moves forward.

On the very first play after the interception, Jones dropped back and launched a deep left post pattern. Bourne did a double move on Diggs, shook him off, caught the long bomb and, as Dennis Eckersley might say, went bridge. It was an electrifying play by the rookie quarterback, which was followed by a successful 2-point pass to Jakobi Meyers to make it 29-26 Patriots.

Dallas had plenty of time to answer, 2:05 and the 2-minute warning. But the defense was unable to duplicate the heroics of Jones. The Patriots were poised to get off the field on fourth and four at the Dallas 35-yard line, but Prescott found Cedrick Wilson for 13 yards on the left sideline with Jalen Mills covering him. Prescott then found tight end Dalton Schultz over the middle for 12 yards, putting Dallas at the Patriot 40 yard line.

Then something happened which should have won the game for the Patriots. An unsportsmanlike conduct penalty on Connor Williams put the Cowboys back on the Patriot 45. Since the second down play had ended, there was a loss of down and it was third and 25. Prescott scrambled to his right and somehow was able to find CeeDee Lamb for 24 yards. He made a leaping grab with Mills (again) in coverage. This play was the real backbreaker for the Patriots, as Zuerlein hit a 41-yard field goal on the next play to tie the game with 20 seconds left.

Mills had a rough game for the Patriots. In addition to giving up two key passes on that drive, he gave up two touchdowns, both to Lamb and one of them the overtime winner. His bad play underscored the unfortunate trading of Stephon Gilmore to Carolina. The overtime winner was pathetic as Lamb merely ran away from Mills, waving at him as he crossed the goal line.

In overtime, the Patriots did get the ball first, but they needed a touchdown to win the game. If they give the ball back to Prescott, they lose. A first down drop by Nelson Agholor begat a four and out, and Prescott eventually found Lamb wide open for a game-winning 35-yard scoring pass with Mills in futile pursuit.

Dallas made a lot of mistakes which should have cost them the game. In addition to the penalties and bad fourth down decisions, Prescott had an end zone pick by Kyle Dugger early in the second quarter, and Prescott fumbled the ball at the goal line at the end of the first half. The fact that the Patriots were still in this game despite the disparity in total yards, total plays from scrimmage and time of possession is a nice thing, but losing the game in the end is still unacceptable and “moral victory” should be expunged from the vocabulary of Patriot Nation.

The Patriots also suffered a blocked punt, but that led to Prescott’s end zone fumble. The Patriots had zero sacks of Prescott, choosing instead to overplay the run and dare Prescott to beat them with his arm. In the end, Dallas won because they are a supremely better team who could very well wind up in the Super Bowl. The Patriots did well to be in the game at the end, but the same thing happened with Tampa Bay two weeks ago.

Jones finished 15 of 21 passing for 229 yards, two touchdowns, one pick and a rating of 119. His rating was actually better than Prescott. Harris had 101 yards rushing on 18 carries, while Meyers had five catches to lead the team. Bourne’s one catch for 75 yards was good for the most receiving yards.

Prescott was 36 of 51 passing for 445 yards, three touchdowns, one pick and a 108.7 rating. Lamb had nine catches for 149 yards. If stopping Ezekiel Elliott was the top priority, they held him to 69 yards on 17 carries.

Next week the downtrodden Jets come to town. The Patriots beat them in Week 2, but that win was on the road. If the Patriots don’t get off the home schnide here, then there are deeper problems with this team beyond losing close games to elite NFC teams.

Everyone needs to shrug this off, take a few deep breaths, and head out to Fenway this week to see if the Sox can take three from the Astros and head to another World Series.
﻿

READ NEXT:
Dallas Loss is a Reminder Patriots Need to Figure Out How to Stop Beating Themselves
Posted Under: 2021 Patriots Season