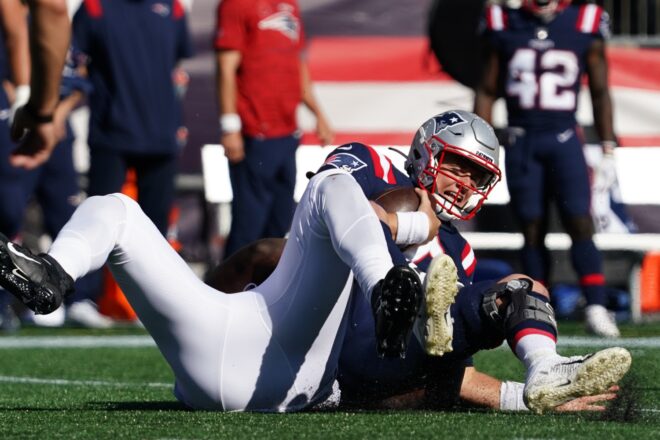 Some thoughts coming off of the Patriots’ loss to the Saints on Sunday:

1) Looking back at this one, the stat sheet certainly doesn’t nearly tell the entire story in terms of the final outcome, especially when it comes to the play of rookie QB, Mac Jones.

After re-watching the game, Jones played his heart out on Sunday, with the rookie giving it pretty much everything he had. He finished 30-of-51 for 270-yards along with a touchdown and three interceptions, however, two out of his three turnovers were absolutely not his fault.

On the first takeaway by the Saints, Jones was completely drilled as he was getting rid of it, causing the football to float into the hands of a defender. The second came on the first offensive play of the third quarter after he led Jonnu Smith a little long on a ball that was certainly catchable. Unfortunately, Smith couldn’t haul it in and it went off his hands and up into the air, landing in the hands of the Saints’ Malcolm Jenkins, who took it the other way for a touchdown to extend New Orleans’ lead to 21-3.

Jones final interception of the afternoon came on the last drive of the game with only 15-seconds left to play when New England was already out of this one at 28-13, with Jones making a seemingly errant throw behind Nelson Agholor on a deep ball near the end zone. That one sealed it, as after the play, opposing quarterback, Jamis Winston (13-of-21 128yds 2 TDs), knelt down to run out the clock.

Overall, Jones scrambled, ran, stepped up, had a couple of QB sneaks, dove for extra yards, and did just about everything he could to make the most out of each play. He made quite a few contested throws against a Saints defense that was just relentless. New England’s offensive line struggled to keep them at bay and despite a lot of passes where Jones got rid of it fairly quickly, they were still constantly closing in on him. He still was hit far more than he should have been, with Jones ending up on his back far too often after defenders broke through and got to him as they tallied 11 QB hits on the afternoon.

On the other end, his receivers struggled to get much separation and a lot of his passes came with mere inches to spare. Surprisingly, despite that, Jones delivered but there were a fair amount of throws that his guys just couldn’t quite bring in.

In the end, the kid played his heart out and he looked exhausted and broken at the end of this one, with Jones sitting at the end of the bench with his head down in the closing seconds following his final turnover. Head coach Bill Belichick was spotted going over to him at the end of the game and grabbing his arm to get him to leave the field with him.

After looking at the film, Jones should feel relatively good about his performance. The former National Champion quarterback isn’t used to losing, so at 1-2 it’s probably safe to say this one will just be something to build on heading into next Sunday.

2) Losing James White was significant, and it’s going to play a big role in an offense that’s already fairly limited when it comes to playmakers to begin with.

The veteran running back was injured early in the second quarter after being slammed down to the turf, with White staying down reaching for his hip.

You could tell it wasn’t good, as White was clearly in pain and was eventually carted off the field as teammates and players came over and wished him well as he left the field.

In his absence, the Patriots surprisingly used Brandon Bolden in that role, which didn’t work out all that well. Bolden is a terrific special teams player but he’s not explosive on offense by any means. As a result, it leaves New England significantly undermanned against one of the most difficult offenses they’re about to face this season.

3) Getting back to the Saints defense, it’s pretty obvious that they came into Gillette Stadium Sunday looking to make a statement, and they were unbelievably physical – almost to a fault.

Every tackle wasn’t just an attempt to simply wrap up and bring a guy down. Each one, instead, saw them grab the player and slam them hard to the ground. The play on White was the most obvious, as White was grabbed and slammed down hard to the turf, which ended up being one of the key moments of the game.

Matthew Slater could see what was going on. You could see his reaction on special teams when he was shown getting into it with Saints players where it was clear he wasn’t pleased with what was happening.

Watching at a distance, seeing how New Orleans plays is likely a reminder that there may have indeed been a reason head coach Sean Payton was suspended for a full season during the “bounty gate” debacle. His guys obviously came into this contest looking to hurt people coming off a tough loss last weekend and to their credit, they were definitely the more physical team.

It clearly paid off. You could see guys like Smith and Bolden each tentative going into the defense. Bolden actually even slowly backed into the line on a play where they needed a first down, which more or less encapsulated what was just a frustrating afternoon.

4) For a team that’s typically so good on special teams, this hasn’t been a good two weeks for Bill Belichick’s club.

Sunday saw Jake Bailey get a punt blocked, which was unusual to say the least for a unit that usually does a good job of not letting guys making a clean run at him. To make matters worse, he also kicked the ball out of bounds for the second straight week on a kickoff which, again, gave the Saints terrific field position.

Considering that it’s an area where it’s always been a point of emphasis, it’s surprising to see those types of miscues. The one highlight was the fact that kicker Nick Folk remained steady, connecting on each of his two field-goal attempts.

For a game that was actually closer than what the final score indicated, it was just a few plays here and there that could have turned the tide and unfortunately, these added to the ones that ultimately saw New Orleans leave Foxboro with the win.

5) New England needs to get more physical up front and the loss of Trent Brown is just killing them right now.

The veteran tackle has missed time due to a calf injury, which has seen the Patriots work in both Justin Herron and Yasir Durant, neither of which has played at close to his level.

That’s led to Jones either being flushed out of the pocket or forced to step up, which has made it difficult for the offense to get into any type of rhythm.

While running back Damien Harris has done a good job running the football, Brown’s absence has prevented the running back from potentially powering off of his side and the Saints did a good job of stacking the line and making things tough on him.

It’s possible the team was simply being cautious this week while hopefully ensuring that Brown can go Sunday against the Buccaneers, but regardless, they need him back desperately as they try and potentially get back on track when Brady and the Buccaneers visit Foxboro next Sunday night.