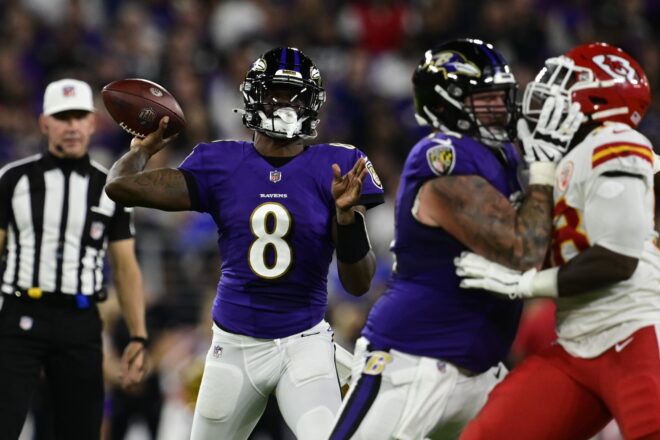 The fans are back in NFL stadiums nationwide. Thank goodness.

Other than SoFi Stadium, which will usually be counted on to have more visitor fans than home fans, the NFL offered its live fans something to really squawk about this week. Sure, the threat of COVID-19 is still out there, and unvaccinated fans going to these games is both selfish and dangerous, even though it is their bodies. But some of the games we have seen have been downright heart-stopping. More than that, the games have been…

Breaking hearts, and we don’t mean being swooned over by women

Some of the results this week were just plain shocking, especially the finishes of some of these games. There have been a lot of hearts broken this week, more than what went down the previous week.

We begin with that four-hour lollapalooza on Thursday night in Landover, Maryland. The Giants are holding on to a 29-27 lead against Washington. The unnamed football team (call them the Red Tails and get this over with) drove from their own 25 all the way to the New York 30. With five seconds left, Dustin Hopkins came out for a 48-yard field goal. Wide right. Game over, Giants win. Nope, penalty. Dexter Lawrence was offside. An untimed attempt from 43 yards. Good. Washington wins. Lawrence is less popular in New York than Joe Pisarcik.

This Giant meltdown was the precursor to Sunday’s action. Trailing Arizona 34-33 with 2:09 left, Minnesota drove to the Arizona 19. Chip shot field goal for kicker Greg Joseph. Nope, wide right. Cardinals win. Tennessee was down 14 at Seattle and that noisy place, but won in overtime on a 36-yard field goal by Randy Bullock. Seahawk fans (all 12 of them; hope you get the joke here) were aghast. Teams simply don’t do that to the Hawks at home. The Chargers, in front of a ton of Dallas fans at “home” at SoFi Stadium, played well but fell victim to a walkoff 56-yard field goal by Greg Zuerlein to give the Cowboys a garrison finish win. To cap things off, Kansas City had a 35-30 lead on the road at Baltimore, but gave up a late touchdown on a Lamar Jackson touchdown run. Trailing 36-35, the Chiefs had the ball and a seemingly easy road to victory with Patrick Mahomes at the helm. But four plays into the drive, Clyde Edwards-Helaire fumbled the ball away at their own 32. Baltimore clinched the win four plays later when Jackson gained a first down with a two-yard run on fourth down and one.

By the way, “Red Tails” pays tribute to the Tuskegee Airmen, heroes of World War II. Go visit a history book and look it up. 332nd Fighter Group. Painted the tails of their P-47s red. Make sure that, when you do read about them, you see the part about “Jim Crow laws” and what those guys went through in a segregated military. Daniel Snyder should do the right thing and take this name. And honor some real American heroes.

A few seasons ago, the Patriots beat Kansas City 43-40 at Gillette Stadium. The game was noteworthy in that it was the first 43-40 final score in NFL history. So, this 25-6 final posted by the Patriots got this writer thinking. First-ever 25-6 final?

You can look this up. The last 25-6 final was not only as recent as three seasons ago (2018), but your Patriots won it, over the Buffalo Bills. On October 29 of that year, the Patriots went to western New York and took care of the then-beatable Bills. Stephen Gostkowski kicked four field goals, just like Nick Folk did on Sunday. There was also a missed conversion, but in this game it was a failed two-point attempt, not a missed PAT like Folk this week. The touchdowns were scored by James White, who scored in Sunday’s game on a seven-yard run, and a pick-six by Devin McCourty, who also had a pick in this week’s win over the Jets.

So now you know the formula for winning a 25-6 game. Try it out in your backyard someday. It had only happened three times prior to 2018: Chicago over Tampa Bay in 1995, Philadelphia over Pittsburgh (a first-year team, known then as the Pirates, and renamed the Steelers in 1940) in 1933, and the Giants over Chicago in 1931.

By the way, the aforementioned 43-40 game was two weeks prior to this one. We’re not kidding.

There are some football franchises out there who right now are sweating bullets. And we are talking about the next ten years, not just this year.

Several teams made some very big decisions over who will be their quarterback for now and beyond. Some of these teams are liking the early returns, while others may be on high bridge alert (as in maybe jumping off of it).

At the top of the list are, of course, the Jets. Zach Wilson was an interception machine on Sunday against the Patriots and he is now 0-2. Meanwhile, the Panthers are now 2-0 with Sam Darnold at the helm (they beat New Orleans this week at home after beating the Jets last week). If the Jets loused up this exchange, then this franchise may be the Chicago Cubs of the NFL by the time Super Bowl C (100) comes around. Heck, the Cardinals may win a Vince before the Jets do.

The Lions made a curious trade with the Rams, swapping quarterbacks. These sorts of deals in the NFL are almost unheard of. But so far, Matthew Stafford as an LA Ram looks like a fellow just released after 20 years in prison for a crime he didn’t commit. Meanwhile, Jared Goff is 0-2 in Detroit after his team got pasted on Monday night by Green Bay. Goff did put up decent numbers, but a Rams team that drafts a quarterback as high as Goff was, goes to a Super Bowl with him, then casts him off must have had a real good reason to do so. The Lions may also win a Vince before the Jets do, but they are another franchise that seldom gets things right.

The 49ers are heading towards a real quarterback donnybrook. They traded up to the third position to draft Trey Lance of North Dakota State (Carson Wentz has heard of this place). But Jimmy Garoppolo is still the starting quarterback and San Francisco is 2-0 so far. You don’t spend the number three pick on a backup quarterback. If the 49ers trade Garoppolo and Lance turns out to be a bust, the 49ers are in long-term trouble.

Washington is also heading towards a major decision. An injury to Ryan Fitzpatrick has forced them to use Taylor Heinicke, who is as bland as it gets. But he did guide the WFT to a crazy win on Thursday night. That win was aided by a dunderheaded offside penalty. Fitzpatrick continues to astound NFL experts. He hangs around the NFL because his Harvard lineage gives him high Wonderlic scores (we assume), but neither man is the future at QB. The WFT had their future two years ago in Dwayne Haskins, but had to trade him to Pittsburgh because he was such a manchild.

When you watch the Patriots on TV, usually you have been listening to Jim Nantz on CBS along with former Dallas QB Tony Romo, the top CBS broadcast team. If Fox is calling the game, usually it’s Joe Buck and Troy Aikman. Nantz and Buck have been on the top team at their networks for several years. They have prevented budding stars like Brad Nessler (who bolted to ESPN), Kevin Burkhart and Thom Brennaman (before his on-air gay slur torpedoed his career) from getting the top dog assignments.

For the last two weeks, Patriot TV fans have gotten acquainted with another such guy who should be a national star like Nantz and Buck, that being Kevin Harlan. He actually does have national play-by-play pedigree, as he has been the radio voice of Monday Night Football for several years, and has called eleven Super Bowls on radio, the most ever by one person. He also does college and pro basketball for both CBS and TNT.

Harlan is one of the few football play-by-play men who excel at giving you the details of the play including length of the previous play, down, distance, who defended the play, who the penalty was on, and so on. When you the sportswriter is sitting at your typewriter taking careful game notes, what Harlan provides you helps a great deal. Nantz is also good at this. But Harlan may be even more copious and careful with his presentation, and these last two weeks have been nice with Harlan at the mike.

And in his family, the fruit doesn’t fall far from the tree. His daughter, Olivia Dekker, has done sideline work for football games on ESPN and the Big 10 Network.

How Was This Article?
Posted Under: 2021 NFL Season