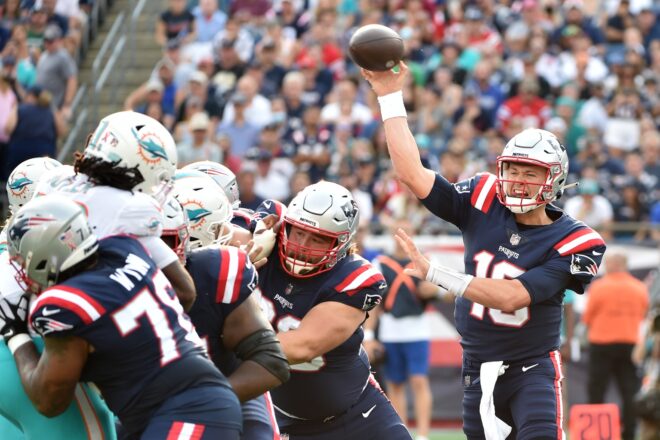 The Patriots entered Sunday’s game with a lot of question marks as they are fielding a slew of new players, including starting a rookie QB. No one was sure how well the team would gel so early in the season. The good news is that Mac Jones looked remarkably poised in the pocket and handled the Dolphins pressure very well.

The bad news is, ball security was poor with four fumbles, penalties…bad penalties were far too prevalent, and the red zone production was terrible. Add those factors in and it is a recipe for losing.

Mac Jones got off to a rocky start when he backward passed/fumbled on the Patriots’ first possession. But he immediately settled down and played very poised, and aware. Jones’ command of the offense was very impressive for someone who was playing in his first NFL game. There were mistakes to be sure, but his performance overall was very good.

Jones completed 29-39 overall for 280 yards with 1 TD and most importantly no interceptions. Miami didn’t blitz much until the second half when their changes in coverages weren’t working enough to confuse him. But Jones handled the blitzes well. He was 14-18 for 129 yards against the blitz. 9-12 for 89 yards on 3rd down and 7-10 with a TD when under pressure. Yes, they kept it simple with check-downs and shallow crossers making it easier for him, but he kept the chains moving.

He showed some arm strength with a BB to Nelson Agholor for 25 yards and beautiful touch on a 26-yard wheel route to James White. Jason Taylor, the former Miami pass rusher in the Hall of Fame, was calling the game on the radio for Miami, he was impressed with the way Jones hung in there with pressure and nine QB hits.

“They’ve got a quarterback,” he said. Nuff said. 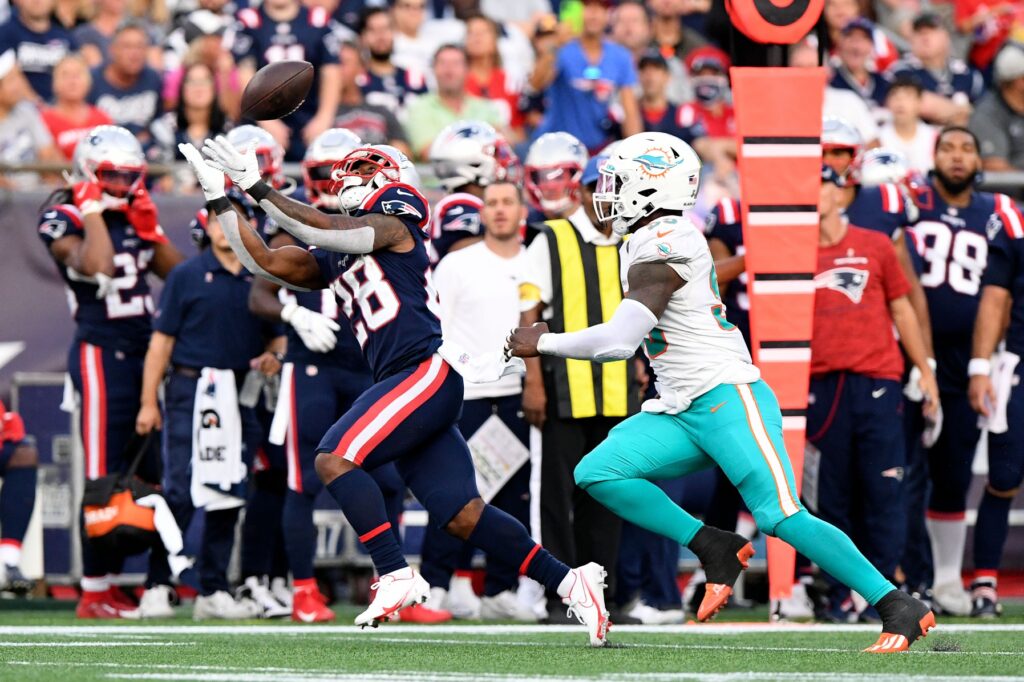 James White hauls in a beautiful pass from Mac Jones during Sunday’s loss to the Dolphins. Brian Fluharty-USA TODAY Sports

The running game was led by Damien Harris who carried 23 times for 100 yards and added two catches for 18 yards. His best run of the day (other than the 35-yard scamper on the first play from scrimmage) was a touchdown run that was wiped out by a penalty…a familiar refrain on the day. But his day won’t be remembered for any of those things. It will be the fumble deep in the Dolphins’ end with a chance to take the lead for a chip shot field goal or to score a touchdown.  That one stung and it will be interesting to see how he reacts to it against the Jets this week.

Rhamondre Stevenson in just his second snap fumbled the ball, although it appeared that his backside may have touched down. It was close and the call on the field was a fumble. If they ruled he was down, it may not have been overturned. However, ball security was an issue for him in college, so it will be an area to watch. He got blown up by Elandon Roberts on a blitz pickup and was lucky that the officials flagged Roberts on a low hit.

James White had four carries for 12 yards but looked good in the passing game catching six passes for 49 yards, including that wheel route mentioned above.

Nelson Agholor had a difficult summer and missed time during the week with an ankle ailment. Fans were all set to turn on him immediately…well hold off on that one. Agholor had a very solid game with good separation and looked sharp. He had five catches for 72 yards and a touchdown. He looked in sync with Jones which is a positive.

Jakobi Meyers was his usual chains-moving self with six catches for 44 yards, running a lot of shallow crossers but had a drop in the red zone. Kendrick Bourne had only one catch but was limited in his snaps due to the two-tight end looks. But he had two catches wiped out by penalties.

With the new tight ends Jonnu Smith and Hunter Henry in the fold, the Patriots ran a lot of 12 personnel (1 RB, 2 TE, 2 WR) sets early in the game. As I pointed out in our observations after the game last night, the new tight ends didn’t have great production but in one game, they nearly got half of what the team had in all of 2020. And they’re just scratching the surface.

Jonnu Smith is going to be a weapon in the offense as he and Jones get more in sync with one another. He had one carry for six yards and 5 catches for 42.  Jones already seems to trust him and expect that trust factor to grow. Henry was used mostly as a blocker in the first half but ended up with three catches for 31 yards.

It wasn’t a ton of production, but the tight ends were targeted eight times and they caught eight passes. It is the start of better times at the position.

The offensive line had a sort of Jekyll and Hyde sort of game. While they opened up holes for the running game to run for 125 yards, and for Jones to pass for 280 more, the penalties and pressure allowed on the QB weren’t the best of days for the offensive line.

Jones said after the game, that he could have gotten rid of the ball quicker, but give Miami credit, they were often getting the better of the matchups with the New England linemen.

The penalties were absolute drive killers. After Trent Brown went down with a calf injury, Justin Herron came in and was ineffective. He was replaced by former Chiefs OL Yasir Durant. We expected a much better effort out of this group. 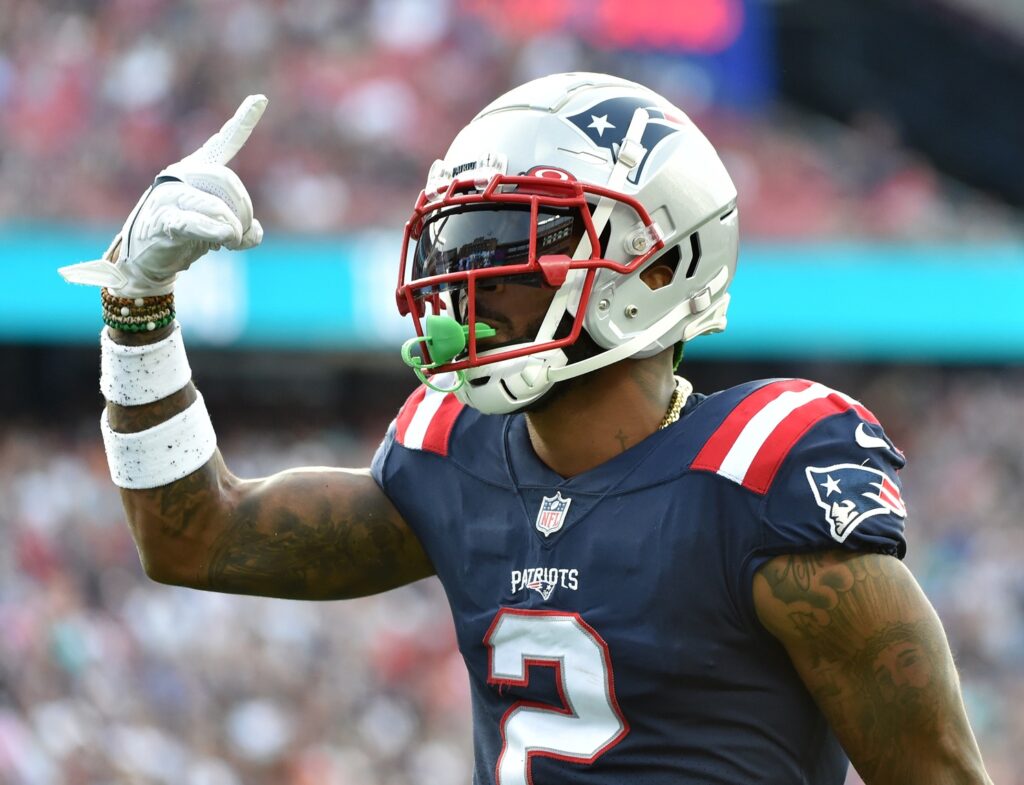 Jalen Mills gestures after breaking up a pass in the end zone. Bob DeChiara-USA TODAY Sports

The defensive line had a very rough first drive where it seemed like Miami moved far too easily right down the field. But after that drive, the run defense buckled down and held the Dolphins to just 74 yards on 23 carries for a 3.2-yard average. Lawrence Guy and Davon Godchaux played well.

Rookie Christian Barmore showed some good push on some passing plays and it is a good sign for things to come. The overall game by the defense, holding Miami to 17 points is a good sign.

The linebackers got off to a slow start but from there they picked it up. Kyle Van Noy had a solid game and had a big sack of Tua Tagovailoa. Josh Uche also had a sack where he slammed rookie tackle Liam Eichenberger to the ground and then sacked Tua.

Matthew Judon had a crushing hit on Tua as he was releasing the ball on Jonathan Jones’ interception. Had the Patriots pulled the game out, the photo of that would have been the lead photo of every story.

The Patriots’ secondary gave the Dolphins’ wide receivers’ speed plenty of respect. They were giving them plenty of cushion underneath playing far off the ball, something we’re not accustomed to seeing. That’s why those quick slants Tua was throwing to Devante Parker and Jaylen Waddle were so effective. They should have thrown more…Waddle looks to be the real deal.

Kyle Dugger and Adrian Phillips had three combined tackles for loss in run support. Jalen Mills had a nice breakup of a pass in the end zone. Jones had a pick, and Devin McCourty nearly had another. While it wasn’t a “bad” game for the secondary, but it could have been better.

The kicking game went with Nick Folk and he was 3-3 for field goals, as the offense stalled in the red zone all day. His longest field goal was from 42. Jake Bailey only punted twice, his first went into the end zone but his second was a booming 62-yarder.

Penalties hurt. Brandon King was flagged on a kick return that Brandon Bolden shouldn’t have attempted and it ended up with the team starting for the 10-yard line. Judon got flagged for an unnecessary roughness penalty on another. Gunner Olszewski didn’t have a lot of room to run.

The Patriots’ game plan on offense was working, they ran the ball effectively and Jones passed for 280 yards. But ball security and red zone inefficiency cost them the game. So, while the game plan was effective…to a point, they couldn’t finish.

It is curious that these are the type of games that Bill Belichick-coached teams usually win, forcing the opponent into making mistakes and turning the ball over while taking bad penalties…Sunday it was the New England turn to make the critical errors.

Defensively, we predicted that the Patriots would hold Miami to 17 points, but we had them finishing one more drive.

By: Mark Morse
Shame that such a strong effort ends up with the Patriots coming up short.
48 mins ago