1 year ago at 10:41 am ET
Follow @IanLogue
Posted Under: Patriots News 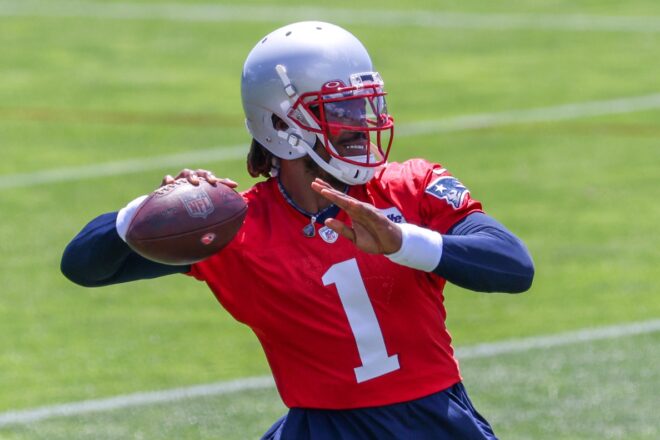 Some news and notes for this morning after a break last week:

1) This past weekend marked the end of football for both the coaches and a few Patriots players, with Cam Newton and Mac Jones among names who are expected to report this week ahead of next week’s start of training camp.  Both have been busy since minicamp and OTAs ended last month, which sets the stage for what should be an interesting month when the two next hit the field.

Newton has been fairly upbeat and ended last month’s workouts on a high note, having one of his best practices during the club’s final session.  Meanwhile, Jones had a frustrating finish and has likely spent the last month with that on his mind heading into training camp.

For Newton, it’s obvious Bill Belichick believes in him and will give him every opportunity to retain the job for this year.  The hope will likely be to have Jones learn from the sidelines and continue developing, potentially keeping him as an observer for his rookie season.  The other aspect is simply that the locker room dynamic will play a factor and there needs to be zero doubt about who the leader of this football team is heading into the start of the regular season.  Newton is a popular player and if he takes care of business during camp, even if he isn’t perfect, he should be the starter leading up to Week 1.

That being said, this season is going to be tough for Newton, for a variety of reasons.

The first being that his margin for error will definitely be less than it was last season.  Coming off of a 7-9 season, the club spent a lot of money in free agency this offseason to put more talent around him, which was an argument that Belichick alluded to and Robert Kraft further expounded on this spring.  As a result, Newton has some weapons and what should be one of the more talented offensive lines in football, along with a pretty terrific backfield.  However, what he’s able to do with it will be the biggest question we all have when they eventually hit the field.

But, and this has been said here before, it’s hard not to wonder just how bad last year might have been for him had there been fans in the seats at Gillette Stadium.  Given his struggles, one can only imagine the ire he would have drawn from Patriots fans last season.  Instead, he had the luxury of empty seats and nothing but the encouragement of coaches and teammates.  That likely won’t be the case and how he handles the adversity is another X-factor that is hard not to be a little curious about.  Will he hang his head and get frustrated like he did at times in Carolina?  Or can he “ignore the noise” and get through it?

With the NFL adding a 17th game to the schedule, he’s got a long stretch this year and needs to be good from start to finish.  Not to mention that his future is likely on the line since he’ll need to prove to other teams he’s worthy of starting elsewhere should the Patriots decide to hand the job to Jones next year.

Either way, this team is too talented to not at least be playing in January and that will mean Newton will need to be at his best.  He’s gotten plenty of support from the coaching staff who obviously was aware of the club’s personnel issues last season, along with the limited offseason he had.  With those two factors now off the table, it’s up to Newton to reward that confidence when he steps on the field to begin the 2021 campaign.

2) The Stephon Gilmore situation should hopefully reach some sort of resolution beginning next week, as time is running out for something to get done between the two sides.

Mike Reiss noted in his Sunday column that despite Gilmore’s recent comments to Josina Anderson where he voiced his frustration over his contract, the fact he mentioned he wanted to “find common ground and get it situated” clearly shows he wants to be here, which is at least a positive.

Now the question is simply, how can they get it done?  Coming off of a torn quad and offseason surgery, he’s in somewhat of a difficult spot until he’s able to show everyone that he’s healthy and fully recovered.  He’s already said, “I don’t want to push it” and will likely take things slow, which would allow him to show up and stay out of practice without potentially being fined.  Most reports seem to believe the two sides will get something done before the end of camp, with Reiss feeling that the Patriots will likely do what they’ve done with past players and possibly set Gilmore up for a raise for this season by adding some easily achievable incentives as they did previously with Rob Gronkowski and Tom Brady.

But regardless, Gilmore is a key piece of their defense if they have any championship aspirations.  The road to SoFi Stadium will probably include a match-up against Kansas City or another challenging passing offense and having Gilmore in the secondary at least evens things up enough where they would be competitive.  With Gilmore seemingly interested in staying, it would be nice if they could find the “common ground” he’s hoping for because if they can, the odds of seeing them in the mix come playoff time would definitely be much more realistic.

3) Meanwhile, N’Keal Harry will remain another player who just raised the bar for himself heading into training camp.  He and his agent set up a tough situation after asking for a trade and the likelihood of the team dealing him before camp is probably unlikely, which will now make things a little awkward for him when camp starts.

He has no leverage since he can’t hold out.  Worse yet, he’s going to have to play extremely well in order to possibly set himself up to be dealt.

Considering Belichick is supposed to have been the person who wanted him, it would be interesting to know if a heart-to-heart with the coach might happen to possibly squash the situation.  At the same time, he likely wasn’t happy about Harry and his agent going public about his grievances, which could simply mean they’ll put pressure on him to perform in camp and send the message that airing your grievances won’t give you the desired outcome – at least not on the player’s terms.

But it’s doubtful that Harry gets dealt without some team offering fair compensation for him.  It’s unfortunate to see how this has played out and it’s going to be interesting to see how Harry conducts himself in the coming weeks before we finally see what the future might hold for him.

4) After hearing about the fact Tom Brady played the 2020 season with a torn MCL, raise your hand if you’re wondering if Roger Goodell isn’t salivating over the opportunity to suspend the future Hall of Famer yet again.

Reports have come out that the league is aware of the situation and is reportedly looking into it, which could mean that a punishment could be coming.  Some have compared this to the Ben Roethlisberger situation where he and the Steelers weren’t transparent about his elbow injury, which led to the club being fined $75,000 and head coach Mike Tomlin getting hit with $25,000 of his own.

But we all know how Goodell feels about people he deems “repeat offenders” and that could be bad news for Brady, who could possibly be suspended if the league finds any wrongdoing.

Then again, as we’ve seen, it doesn’t take much for them to make a rash decision and the investigation will likely include requesting access to conversations and text messages, which Brady refused to do during DeflateGate, and rightfully so.

How much knowledge the Buccaneers had about the extent of the injury is obviously the big question but Bruce Arians hasn’t exactly been a stranger to throwing Brady under the bus, even after strong performances and what he’s done for the franchise.  But there’s no question that some form of punishment is coming and it wouldn’t be shocking to find out that Tampa Bay may be without their starting quarterback for at least one game heading into the season.

5) There’s an NFL record that both of the above players could break this season, with Brett Favre’s 525 career sacks now apparently in jeopardy and both Roethlisberger and Brady will likely be the new all-time leader in that department.

According to SteelersNow.com, Roethlisberger is currently the player on pace to get there first with 516 career sacks, with Brady right behind him with 512.

Brady may ultimately pass him, primarily due to Roethlisberger’s size and mobility and the fact Pittsburgh did a good job with their scheme last season in keeping him upright.  But regardless, the two will quietly be competing for the top spot this season to take over this milestone, which is a record that it’s probably safe to say neither of them are probably looking forward to potentially setting.

Brady will not be suspended. Any league repercussions would be to the team and the coach. It is not Brady’s responsibility to put himself on the injury report, it is the team that is required to report injuties.