2 years ago at 9:02 am ET
Follow @bob_george
Posted Under: Patriots Commentary 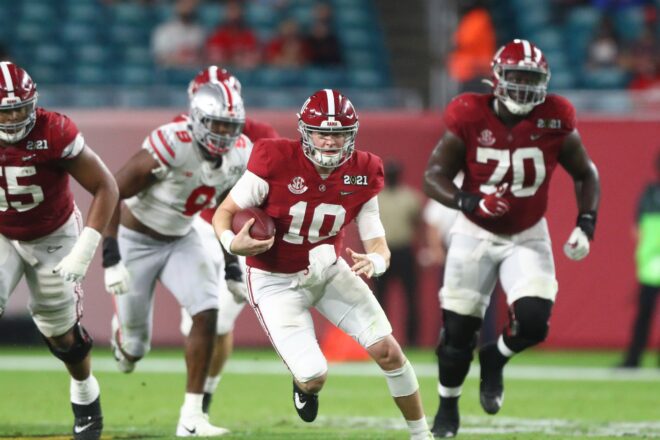 The suspense is finally over.

The Patriots were going to trade up.  They were going to make a run at one of the top five quarterbacks in the 2021 NFL Draft in Cleveland.  Then there were rumours that Bill Belichick would trade down, as sources had the Patriots working on a deal to help bring Jimmy Garoppolo back to Foxborough.  Maybe the Patriots spend the 15th pick on something other than a quarterback, perhaps Belichick and Josh McDaniels didn’t like any of the potentially available quarterbacks and would try to pry Garoppolo from the San Francisco 49ers.

In the end, Garoppolo will probably head somewhere else.  The 49ers took North Dakota State’s Trey Lance with the third pick in the draft, thereby officially rendering Tom Brady’s former backup quarterback expendable.  But it doesn’t look like Garoppolo will be heading back to New England, as many followers and experts may have figured.

What actually happened was somewhat comparable to Vince Wilfork falling to 21 in 2004.  Alabama quarterback Mac Jones, who grabbed a ton of national spotlight as he led the Crimson Tide to still another national championship three months ago, somehow was available at 15.  The Patriots wasted very little time in drafting Jones, thereby immediately invigorating all of Patriot Nation.  In the wake of the biggest free agent haul in recent NFL history, the Patriots have now filled their biggest hole and possibly have returned to the table of champions in the NFL.

Nick Saban, the legendary Alabama head coach, is a former Belichick “slappie”, a term used to describe all those assistant coaches in the 1990s with Cleveland when Belichick was the Browns’ head coach.  Saban, along with such other guys as Scott Pioli, Thomas Dimitroff, Kirk Ferentz, Jim Schwartz and many others, learned under Belichick which helped pave the way for their successful careers in coaching and the front office.  Belichick and Saban are real tight, and the Patriots have taken some of his star players over the years (Dont’a Hightower, Damien Harris, Anfernee Jennings, among others).  It is obvious here that Saban had a great deal of say and influence in the Patriots making this kind of franchise-altering decision.

Jones became suddenly famous and much sought after following his team’s run to the National Championship, culminating in a 52-24 clobbering of Ohio State in the title game.  Jones was 36 of 45 passing in that game with five touchdown passes.  He was blessed with such targets as Heisman Trophy winner Davonta Smith and Jaylen Waddle (both of these guys were selected in the first round ahead of Jones).  In New England, he will get to throw to Nelson Agholor, Kendrick Bourne, Jakobi Meyers, Hunter Henry and Jonnu Smith, but sadly, will not get to throw to the retired Julian Edelman.

The Patriots did beef up their previously inept receiving corps, which most people thought was a waste of time and money if Cam Newton were the quarterback of the future.  With Jones now in the fold, everyone on the entire team can puff out their chests and walk a little taller now.

All this said, believe it or not, Newton still has a place on this team, at least for this coming year.

The Patriots are in a position to introduce Jones to the Patriot offense in much the same way they did for Drew Bledsoe in 1993.  Bledsoe was the top pick in the 1993 NFL Draft out of Washington State, but then-new Patriot head coach Bill Parcells had a plan as to how to handle Bledsoe.

What Parcells did was to begin the 1993 season by starting Scott Secules at quarterback.  Bledsoe opened the season on the bench.  Secules started the first four games of that season, and lost all of them.  Starting the 2021 season 0-4 won’t be real popular with Patriot fans, but Newton is significantly better than Secules despite his age and diminished playing skills.  What will likely happen is that Jones will serve an apprenticeship behind Newton.  But unlike Garoppolo, Jones won’t have to serve a multi-year apprenticeship.  Jones will take over much sooner, but how soon will depend upon how poorly Newton plays, or if somehow Newton remembers how to throw a football and holds on to the starter job longer than expected.

Jones checks a lot of boxes, including a lot of Brady boxes.  He can read defenses and can work through progressions.  He won’t run like Newton, but he brings a similar skill set to the position like Brady did.  Comparing Jones to Brady is as unfair as it gets, but if the Patriots wanted to bring in a more natural successor to Brady, then Jones may be a better option than Garoppolo.  If Jones is not as injury prone as Garoppolo, Jones will be a much better get in the long run.

Jones’ detractors will point out that the time many football experts were looking at him as the number three pick was foolish and folly.  Jones was coming off as a ton of hype because he dropped 52 points on Ohio State.  Jones isn’t as good as you think, they said.  He was great because of the system he was in.  Put him in the NFL and you won’t see anything like what you saw in Tuscaloosa.  Many experts thought Garoppolo was the best choice to be the quarterback of the future for the Patriots, which many thought was his destiny after being a second round pick in 2014.

Instead, it is Jones that will now be handed the scepter.  He gets the keys to the car.  Not Jarrett Stidham, Danny Etling or Jimmy G.  If Jones was a good system quarterback at Alabama, he should fit in well with Belichick and McDaniels.

Jones was visibly elated when he left the players’ area and took the stage with Roger Goodell.  He said that he was going from the best college program of all time to the best NFL team of all  time, a statement which brought lots of boos from the fans in attendance and smiles from everyone in New England.  He said he looked forward to Belichick’s coaching, and said a ton of other “right things”.

It may turn out that it is more important that Jones get along with McDaniels than Belichick.  The GOAT head coach turns 70 next year.  McDanlels is still seen by some as Belichick’s successor.  Ten years from now, McDaniels and Jones could be the next great NFL coach-player tandem.  If McDaniels does indeed succeed Belichick, and if Jones does mix well with McDaniels, the Patriots could very well be perched for another nice run of success.

Replacing Belichick and Brady is a near-impossible task.  But in drafting Jones as decisively as they did, the Patriots may have gotten their man in the end.  If this does indeed turn out to be the next seminal moment in franchise history, it was nice that the Patriots did not have to trade up to get their man.

So, Patriot Nation, sleep well.  Your new quarterback knows what it’s like to win a championship already.