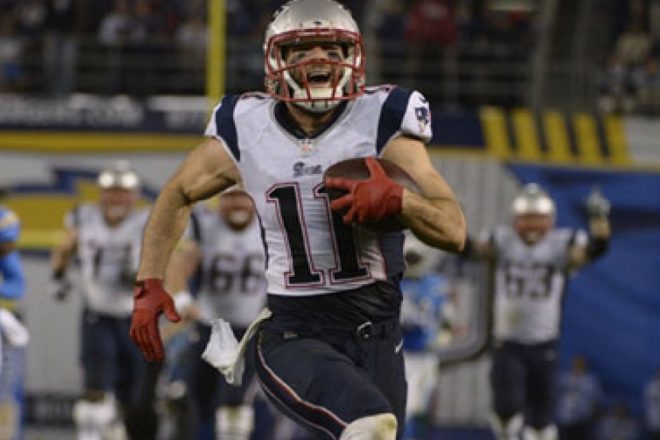 Coming off of the 2012 season, Patriots wide receiver Julian Edelman found himself at a crossroads.

The veteran had some bright moments as both a receiver and a punt returner, as well as even stepping up and helping out on the defensive side of the football.  So far since being drafted in 2009, he’d quietly carved out a role for himself but injuries had cast doubt on his future.

Edelman had suffered both a foot injury and a hand injury in 2012, which saw him play in just nine games that year, the fewest of his short career.  That coupled with the broken arm he suffered during his rookie season and there was doubts about his durability.

The timing wasn’t helpful, either.  Prior to that 2012 campaign, the Patriots had offered him a two-year deal for what Edelman wrote in his book “Relentless” was “more money than I was currently making”, but he passed at the time after he and his agent decided that he’d be better off addressing it after the season.

Instead, following those injuries, Edelman wrote that the team pulled the deal from two-years down to just one, which left him extremely upset.  Even worse, that offseason saw the departure of Wes Welker, who left in free agency and the Patriots seemingly replaced him with Danny Amendola, who was thought to be a quicker and more athletic version.

“It was a lot for me to process,” wrote Edelman.  “My feelings were hurt, and I was mad with the thought that they had decided to move in a completely different direction.  So I looked at other options.  I visited the Giants and I had every intention of signing there.  As far as the Patriots were concerned, I felt, They don’t want me.  They don’t need me.  I’ll go where I’m wanted.”

But in the book, he revealed that it was his dad who was the one that actually convinced him to stay, telling him, “not to make decisions based on emotion.”  So Edelman wrote that by the end of that first week of free agency, “I had simmered down.  Now my head and gut were in New England.”

From there, he signed a one-year deal and came into camp still recovering from his foot injury, which limited him.  It was a crowded group that year, with the team having drafted Aaron Dobson and Josh Boyce to go along with Amendola’s addition.  According to Edelman, Bill Belichick called him into his office to tell him that both Dobson and Boyce were making the team and that he needed to get out there and start practicing.

“We’ve got guys who are capable of playing,” Belichick told him.  “You’ve got to show me what you’re capable of doing.”

After their meeting, Edelman wrote, “I wasn’t 100%, but I knew I was out of time.  Like my dad says, you can’t snivel over it.”  He also said that it motivated him.

“I felt like a cornered animal,” wrote Edelman.  “I knew I had to fight my way out of it.”

Which is exactly what he did.  Edelman came out with a vengeance, immediately establishing himself – not Amendola – as the player who would replace Welker in the offense.

Heading into week one, Amendola opened that door as he was battling a groin injury and Edelman seized the moment, catching 7 passes for 79-yards and two touchdowns during the team’s win over the Bills.  Amendola came up with a big performance of his own as he caught 10 passes for 104 yards, but it was costly as he reaggravated the injury.

He would go on to have his best season with the team, finishing with 105 receptions for 1056 yards and six touchdowns and he snatched the role as the team’s go-to guy in the offense and never let it go.

Even better, his hard work also paid off financially, as it earned him a 4-year deal worth $17-million after that season.

Not a bad start to what ended up being “a helluva story” as he was a crucial part of the first of three championships the following season.  Sometimes the best decisions are the ones you don’t make, and Edelman clearly made the right one by sticking around.

(Portions of this article appeared in this morning’s notes column)