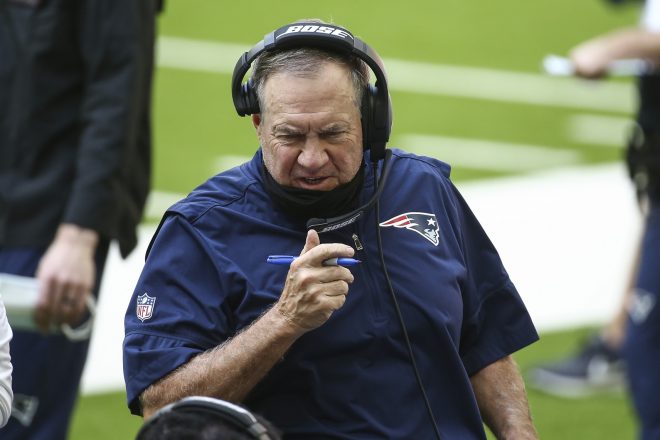 Happy Valentines Day and we hope that everyone enjoys the day with your significant other. With the COVID-19 coronavirus pandemic still in place, has put a damper on our normal activities, but is anyone doing anything special today?

J.J. Watt: The former Texans’ and three-time Defensive Player of the Year asked for and was granted his release by Houston. At this stage of his career, Watt wants to play for a winner and doesn’t want to be part of a rebuilding process. But regardless, his release got a lot of people in New England salivating at the prospect.

But the odds of Watt coming to New England? Extremely low. Yes, Bill Belichick has raved about Watt’s play and compared his presence to Lawrence Taylor.

“Knowing when the big play – critical third-down or fourth-quarter play or red-area play – knowing those critical plays in the game. As good as Taylor would play all game, that was the time when he would play at his best.

“You just don’t see those plays from hardly anybody, but especially guys that are his size and that play as much as he does. He plays everywhere across the board – plays outside, plays inside. He’s effective everywhere. He’s a tough matchup on everybody.”

Would Watt help the NE defensive line? Of course, his versatility would be used by the coaches to create matchups all over the line. But the Patriots, like Houston, are in the middle of a rebuild…So, don’t hold your breath. While a lot of people are saying he’ll end up in Pittsburgh…they are $21 million OVER the salary cap. Look at GB or Buffalo.

QB Talk – We all know the Patriots need a bridge veteran QB and still draft one but the prognostications are all over the place. Some are calling for a trade for Russell Wilson, who while he has a modest cap hit for the next two years for a franchise QB, isn’t going to be traded by Pete Carroll. Others saying a trade for Deshaun Watson makes perfect sense. It does from a NE perspective, but Watson isn’t going to approve a trade to the Patriots.

Others want Jimmy Garoppolo to return, but his cap hit is high, Mike Reiss, from ESPN, even spoke of a possible situation where, Watson is traded to SF, a destination, he supposedly said he’d approved, where Jimmy G. ends back up in NE. But wouldn’t Houston ask for at least a bridge QB in return?  Some believe Dak Prescott makes sense…again, absolutely it does, but it is looking like Dallas is going to franchise him once again. So, we’ll see how it all plays out.

The feeling here is that it will be none of the above.

Tom Brady – What Brady accomplished (albeit with a loaded supporting cast), was incredible this year. Considering that the Bucs were essentially the same team a year ago who were 7-9 speaks volumes about having the right QB. But someone posted on Twitter this week, that Brady is now older than 40 percent of the head coaches in the NFL. That is amazing.

4th & 2 Podcast – If you haven’t checked out our PatsFans.com podcast, “Patriots 4th & 2” in a bit, please check it out. Russ, Derek, and I recorded a podcast on Friday and talked about the Super Bowl, the Belichick-Brady silly debate, and had the great Patriots historian Bob Hyldburg Jr. aka @BobtheStatman on the pod to talk about his latest book.

The 2021 NFL Draft Will Be a Test of Team’s Scouting Departments:

With the Super Bowl now in the books, every team is now on to the 2021 offseason. And because of the COVID-19, the Senior Bowl, usually the first step in the evaluation process that ramps up just before the draft, is now going to be the best evaluation that teams are going to get.

Scouts and the scouting departments will have their work cut out for them this spring as the NFL Combine is out this year, due to the coronavirus. That is the annual rite of passage, “the Underarmour Bowl” if you will, but after digesting scouting reports and watching tape of prospects, it was a time for teams and coaches to see the prospects up close and get a chance to sit down and interview them, see what their motivations are and check their football I.Q.

That’s all out the window now, with the Combine canceled. Teams with the best gameplay evaluators in the scouting departments will have an edge this year over the guys who like to gather information from talking with coaches and sources from within a football organization, as those may be limited this year.

While every team does do analytics as part of the draft, I wouldn’t expect it to take on a larger role this year. This year, the scouts who go to games and depend more on game tape will have the edge.

The Pro Days will now take on an added importance in this year’s draft, but there will definitely be a lack of face-to-face, personal contact teams will have with prospects this draft season.

Bills’ Diggs Acting as a Recruiter for J.J. Watt:

The Buffalo Bills not too long ago were one of the least attractive free-agent markets. But after getting to the AFC Championship Game with a team on the rise, things are changing. Last year, the Bills brought in wide receiver Stefon Diggs, who was a huge piece for their offense. Now Diggs is acting like a Buffalo recruiter and is lobbying J.J. Watt to come to New York.

While Watt will be 32 this season, he still has plenty left in the tank and helping a Bills pass rush that was lacking in 2020, would be a perfect fit. His versatility, and ability to move all over the defensive line, would be a huge boost for an already very good defense. Watt would immediately become a fan favorite in Buffalo.

Dolphins Have Oodles of Draft Capital, RB Should Be A Top Option:

The Miami Dolphins have four picks in the first 50 of the upcoming NFL Draft (#3, 18, 36, and 50). With five other picks later in the draft, that gives them a ton of flexibility and what the team really needs is a top running back to help the offense.

This draft features two excellent backs in Alabama’s Najee Harris and Clemson’s Travis Etienne who would immediately upgrade the offense. But conventional wisdom says that they shouldn’t take a running back early. But if Harris is the guy they really like, would it be a huge stretch if they took him at #18?

Picking #3 wouldn’t lend itself to taking a running back and then later at #36, Harris and/or Etienne may be gone. ESPN’s Mel Kiper has the Bills taking Harris with the 30th pick in the draft. Daniel Jeremiah the draft analyst for the NFL Network has Etienne rated slightly higher.

Watching Harris’ combination of size, speed, and versatility was impressive as he progressed with the Tide. Miami should buck conventional wisdom and take Harris at #18…he’ll be a huge addition (both figuratively and literally) in the Miami offense.

The Jets Are Really Rethinking at QB Again? Say it Aint So Joe:

The New York Jets have been searching for the next franchise QB since Joe Namath. The fact that Namath is now 77 years old and hasn’t played in NY in 45 years shows the level of frustration.

Just three years ago, the Jets addressed QB with the 3rd overall pick with Sam Darnold. Now they’re trying to decide whether Darnold is going to be the guy or do they redip again for one of the top tier QBs (Zach Wilson, BYU, Justin Fields, Ohio State) are the guys they want to lead the team in the future.

The fact that they surrounded Darnold with awful talent at WR, OL, and RB should not be lost in the equation. Darnold never got a fair shake in his first three seasons to show what kind of QB he can be. No one knows (not even the Jets), if he can be “the guy”. But what if they jettison him and he thrives somewhere else…it could easily happen. That would be such a Jets move.