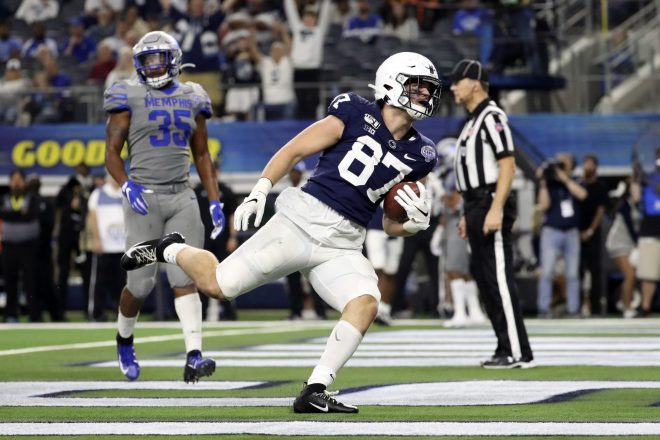 The Patriots have been lacking a viable tight end target since Rob Gronkowski retired after the 2018 season Super Bowl win. In 2019, they had Matt LaCosse and Ryan Izzo and the results were not anywhere near good enough.

LaCosse opted out of the 2020 season and Izzo was the top target. The team drafted a pair of tight ends, Devin Asiasi and Dalton Keene last spring. Combined, the three produced a total of just 18 catches for 254 yards and 1 touchdown. That isn’t nearly enough and has to improve drastically in 2021.

Dealing with a reduced training camp and no OTAs or minicamp last year as well as injuries may have played a factor in their lack of production. Bill Belichick weighed in on that discussion back in December.

“Both guys missed some time there kind of right in the middle of the season after they’d gotten started and had made some progress, and then weren’t able to continue and now have resumed full activity,” Belichick said. “So, hopefully, we can make progress every day. We’ll just have to see how that all works out here. …

“I think we made the most of what we had, but, yeah, not ideal. You’d like everybody out there all the time, but unfortunately, that’s not really realistic in the National Football League.”

With an extra year in the system, Asiasi and Keene may see a big Year 2 jump in production, but they may decide to add another young tight end or opt to bring in an established veteran who can produce. While Izzo is a good blocker, his 13 catches and 199 yards receiving aren’t numbers for a #1 tight end.

There are some intriguing names in free agency and the draft. But Kyle Pitts from Florida, who is expected to be the first tight end selected in this year’s draft, will no doubt be long gone before the Patriots pick at #15.

Freiermuth is a complete tight end, arguably the best overall tight end in the class. He doesn’t have the top-end speed of Pitts or Brevin Jordan of Miami but has the size and physicality in the blocking game to line up as an inline tight end.

He stands 6’5, 258 pounds and uses that size well in both the running and passing games. He has a solid foundation in the running game and will only improve with experience and coaching. But the willingness to get in the scrum and dominate is there. Some analysts have dubbed him as “mini-Gronk” and although that may be a bit premature, the traits are there as he can line up as a traditional inline tight end who can be a weapon in the passing game but open up holes for the running backs, something the Patriots insist on for their tight ends.

Freiermuth will initiate contact with defenders and use his large frame to box out defenders. He has strong hands to haul in contested catches and then runs with physicality to gain yards after contact.

He possesses a very high football I.Q., the ability to threaten the seams of the defense and be an integral part of any offense. While he doesn’t have the elite athleticism of Pitts or Jordan, he more than makes up for that in his physicality. But he is still very good athletically and the versatility to be a complete tight end

– Can improve his leverage as a blocker

– At times allows passes to come into his body

– Needs to improve getting off the snap quicker against man coverage

Freiermuth will be the traditional inline or “Y” tight end. But his athleticism can be used by the offense to move him around to create matchups.

Yes, he could easily push Izzo or Asiasi for the starting role

Depending on his and Asiasi’s development, he could push Izzo this year

With his size and athleticism, he’d be used in the kicking game right away

Conclusion:
Freiermuth is considered a prospect who should go in the late 1st-early 2nd round of the upcoming draft. Would the Patriots triple-dip at the position after taking two a year ago? Obviously, a lot will depend on how the board plays out. The Patriots have other needs as well and if a QB they like is on the board, then that would probably take priority.

With several good wide receivers in free agency, it is conceivable to assume that they’d target one or two of those and it would open the door to see if they’d choose offense over the defense with their top pick. But nearly all draft analysts believe the Merrimac, MA native is going to be a solid, if not star NFL player.

Draft analyst for The Athletic Dane Brugler had this to say:

“Freiermuth checks boxes with his prototypical size, play strength, and warrior temperament required for the NFL. While not as fast as Pitts, Freiermuth is a coordinated athlete with the foot quickness and body sink to create his own separation mid-route. You can also count his career drops (five) on one hand. To sum up, Freiermuth is highly reliable and multifaceted with the talent to land in Round 1 in April.”

Freiermuth is going to be an outstanding tight end in the NFL. He is well-rounded, physical, and athletic enough to be a key cog in the Patriots’ offense if they decide he is their first draft pick. Because he won’t be there at #47. Comparing him to Gronkowski isn’t fair at this early stage but he is going to make a name for himself wherever he does play.