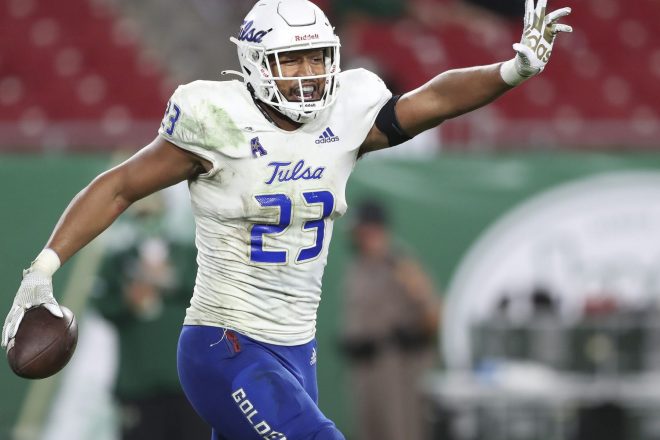 The Patriots lost a ton of talent at the linebacker position during the 2020 offseason. With Kyle Van Noy, Jamie Collins, and Elandon Roberts leaving during the spring, and then Dont’a Hightower opting out due to COVID-19, it was a tough situation to begin the season.

With a dearth of depth on the front seven, it is no surprise that the run defense suffered all season and at times resembled a sieve. Ja’Whaun Bentley filled in the best he was able to, but asking the young LBer to take over Hightower’s role was a lot to ask for.

Recognizing that lack, the Patriots drafted a pair of linebackers with Josh Uche and Anfernee Jennings coming on board last spring. Because of the circumstances, both were pressed into duty perhaps more than they would have …or should have in a normal type of season. Not surprisingly, there was a learning curve with both.

Uche showed promise as an edge pass rusher but started and ended the season on IR due to injuries. Jennings played in a similar system at Alabama but seemed to struggle at times with his responsibilities in the Patriots system. With a full offseason under his belt, he should be better suited to handle the workload in Year 2.

The big question obviously is whether or not Hightower returns for 2021, the Patriots missed his versatility, leadership, and clutch play. However, regardless of whether he returns or not, at 31 this year with a huge salary cap hit and an impending free agent in 2022, the Patriots need to address this position.

Collins is an enormous linebacker who measures at 6’4, 260 pounds, and has excellent sideline-to-sideline speed.  He’s a prototypical Bill Belichick linebacker. Belichick has traditionally eschewed the smaller, quicker, undersized linebackers that most teams are looking for today. However, with a player like Collins, he gets the size of a player like Hightower with the athleticism of someone much smaller.

In the shortened 2020 college football season, arguably no one helped their own draft stock than Collins. He went from a relatively unknown to a legitimate 1st round draft pick. Collins had a tremendous if shortened season and ended up winning the Bronko Nagurski Award as the nation’s top linebacker as well as the Chuck Bednarik Award as the country’s top defender. He earned first-team All-AAC honors, but also garnered first-team All-American honors.

Watching the tape of Collins, it is no wonder that the Hurricanes had their first winning season since 2016, in just eight games, Collins produced 54 tackles, 7.5 tackles for loss, 4.0 sacks, four interceptions, two passes defensed, two forced fumbles, a safety, and a fumble recovery. In two of his interceptions, he ran back for touchdowns and accumulated156 return yards, including a 96-yarder.

– Excellent Blitzer up the inside gaps

– Can sometimes overrun plays and struggles at time with misdirection, play-action

– Was 2020 his true development or was he a one-year wonder?

Collins’ role would be to immediately compete for significant snaps. He can cover a tremendous amount of ground and will be a big addition not only in the running game but in coverage and blitzing as well.

Yes, with his ability to go from sideline-to-sideline, as he grows more comfortable in the defense, the coaches may allow him to blitz more and become a focal point of the defense ala Hightower.

He won’t replace anyone per se but will add depth to a position that is sorely in need of it.

Excellent, with his size and athleticism he can be a terror and an immediate contributor for the Patriots special teams units.

NFL.com’s Daniel Jeremiah wrote about Collins in his Top-50 prospects where he clocked in at #26. “Collins is an enormous off-ball linebacker. He played outside in Tulsa’s 3-3-5 alignment. He has the length and bulk to take on guards and free himself for tackles against the run. He builds speed laterally, displaying tremendous range. He has average short-area quickness, but he is still a dependable tackler in space. He is outstanding in pass coverage, using his instincts to clog throwing lanes. He is more than capable of covering tight ends all over the field. He rushed off the edge on occasion and is good with his hands to defeat tight ends and running backs. You can get a sense of his athleticism if you watch his 96-yard pick-six to defeat Tulane in overtime. Overall, Collins is a unique player because of his size/speed combination and I believe he’ll make an immediate impact at the next level.”

Collins is a smart, tremendously athletically gifted linebacker who projects best in a defense that will show multiple alignments and allows him to show his versatility.

While most people believe the Patriots will opt for a QB/WR/TE with the 15th pick, they may go against the grain and go defense with a front seven pick. Would they go for Collins that highly? That is debatable, and it is also doubtful whether he’d still be on the board at #47. But if they decide to slide back, he could be around between #25-35.