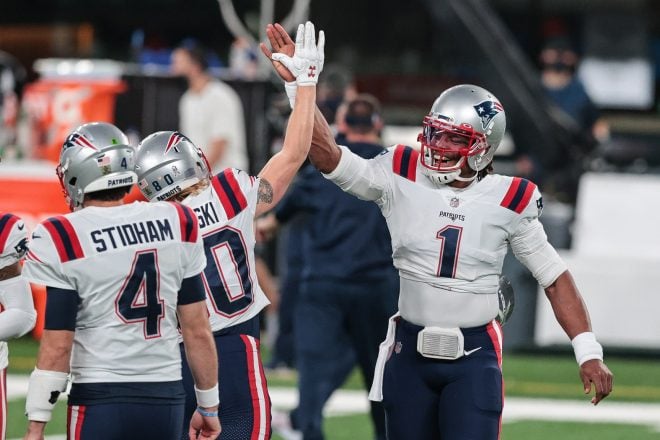 One of the biggest problems the Patriots have seemingly had for much of the season has been their inability to put together a complete game and find a way to win.

When you need to get things fixed, playing the Jets appears to be the best medicine.

While it wasn’t perfect, the Jets made their fair share of mistakes and allowed the Patriots to do enough to get back on track after they finished the night with a walk-off 30-27 win.

Here are some thoughts on the victory:

1) Cam Newton took another big step forward on Monday night, finishing the contest with his best performance since their loss against the Seahawks earlier this season.  He finished the first half 13-of-14 for 120-yards but more importantly, the ball seemed to be coming out of his hands much better and he appeared far more confident in his decision making.

Overall, he finished the night 27-of-35 for 274-yards and the majority of his throws were on time and not thrown into traffic, which had been a trend over the last couple of games.  Newton also scored two touchdowns, with his second one knotting score at 27-27 on a 3rd-and-1 from the Jets 1-yard line with 2:00 to go in the game.

From there, after the defense forced a three-and-out, Newton led them on an 8-play, 45-yard drive that included a terrific 20-yard throw to Jakobi Meyers which set up a 51-yard game-winning field goal by Nick Folk, which helped secure the walk-off win for the visitors.

For a player who has been looking for something to build on, Newton finally looked more like the player we saw earlier in the season.  While their margin for error may be slim, if he can continue to improve over the final 8-weeks, the Patriots could still find themselves in the playoff hunt given how things have gone around the rest of the conference. 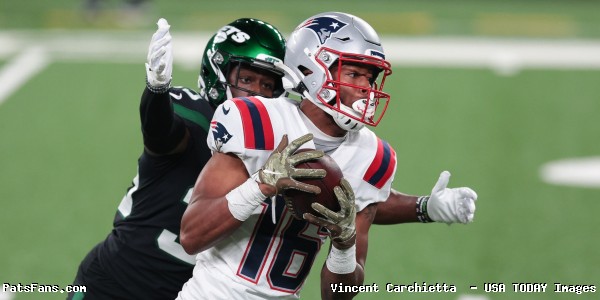 Meyers had a breakout performance on Monday night.

2) We finally saw a breakout performance by a Patriots receiver, with Jakobi Meyers lighting things up on Monday night.  Meyers was absolutely terrific, hauling in 12 receptions on 14 targets as he racked up a career-high 169-yards.  He and Newton were in sync the entire night, with Meyers making some impressive receptions against a Jets defense that had a hard time keeping up with him.

Meyers came into Monday night with just 11 receptions on the year for 125-yards and more than doubled his total thanks to his effort.   He’s now third on the team in receiving yards behind Damiere Byrd (337yds) and Julian Edelman (315yds).  It’s been a long road for Meyers, who had shown flashes but hadn’t been able to put together a performance like this prior to Monday night.  With Edelman’s absence and N’Keal Harry still sidelined, he’s stepping up at the right time and he should be fun to watch over the course of the rest of the season.

3) Damien Harris had another strong performance, rushing for 71-yards on 14-carries before leaving the game with a chest injury.  Harris ran hard all night, which included an impressive run to start the game where he picked up 12-yards on a carry that saw him drag nearly the entire Jets defense with him to kick off the evening.  He finished the night averaging 5.1-yards per carry.

The big question now will obviously be his health heading into what will likely be a tough battle against the Ravens, who will visit Gillette Stadium on Sunday.  But Harris has been outstanding and has shown a lot of the same toughness and grit we saw from him in college.  It may have taken some time for him to get started after battling injuries and being buried on the depth chart, but so far, 2020 has been a big step forward.  Sunday night’s performance now has him as the team leader in rushing yards with 350 on 63 carries, with a 5.6 yards per carry average.

4) Special teams was definitely a big key to Monday night’s win and it was Nick Folk who came away with a solid evening.

Folk hit all three of his field goal attempts, with his final one coming from 51-yards out and it was never in doubt.

He’s quietly had a solid year, hitting 14-of-16 on the season, including 6/7 from 40yds-49yds and 1/2 from 50+.  But his game-winning kick was huge as it broke the Patriots 4-game skid and sent them home with a big divisional win.  Given how the year started for the team at this position, he’s seemingly gotten better as the year has gone on and Monday night was a nice reminder that if they can keep these games close, Folk can definitely get the job done if called upon. 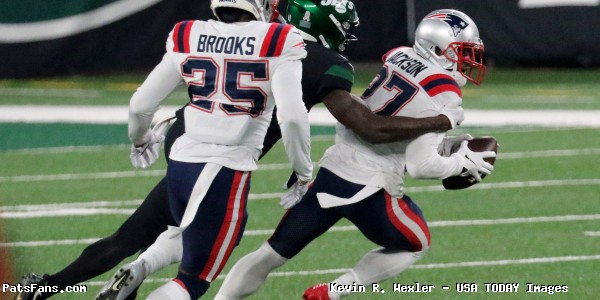 Jackson had a rough night but he rebounded with a big play.

5) J.C. Jackson had a rough night, but they say it’s not how you start but how you finish and fortunately, that was more or less the story for him.

He got beat on a 50yd touchdown bomb from Joe Flacco to Breshad Perriman, who made a double move and managed to get behind Jackson, with Flacco dropping in perfectly as Perriman caught it in stride.  Jackson wasn’t able to catch back up with him and that put the Jets up 10-7 with 9:59 left to go in the first half.

But Perriman wasn’t done.  He got Jackson again later in the game, after Jackson lost his balance down in the red zone and Perriman blew by him, with Flacco hitting the receiver again for another touchdown.  That put them up by 10 at 27-17 with 0:30 left in the 3rd quarter.

However, after the Patriots put together a 17 play drive that ended with a field goal to get back within 7 at 27-20, Jackson picked Flacco off on the first play from scrimmage, tracking down a deep ball that Flacco overthrew to Denzel Mims and Jackson ran under it and made the interception.  That gave the ball back to Newton and the offense, who marched 72-yards on 11-plays and finished the drive off with a 1yd touchdown run by Newton, which tied the score at 27-27.

Jackson’s turnover was the key play of the game and after a tough evening, allowed him to finish things off on a positive note.  But give him credit, as bad as things had gone, he never gave up and it was great to see him create that turnover, which increased his interception streak to four straight games.

New England will now return home to get ready for a showdown against the Ravens, who they’ll face Sunday night at Gillette Stadium.