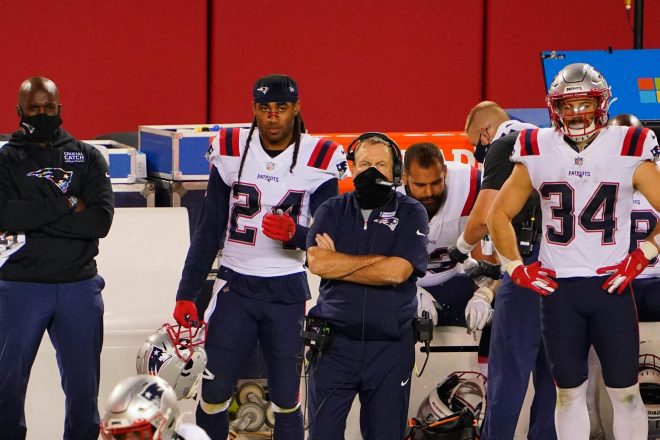 I usually re-watch the game before I write this report.   I saw it once, which was enough!

Who in the NFL’s infinite wisdom pushed this game to be played.  I know KC wanted the game to be played minus Cam Newton.  I know KC would have lost if Newton was QB’ing the Pats offense.  Whoever was responsible or should I say irresponsible within the league should be fired for “conduct detrimental to the league”.   They may be responsible for a superspreader event now that two more players including Stephon Gilmore have tested positive.  I wonder how Patrick Mahomes feels now that he had close contact with Gilmore at the end of the game.  Does Mahomes have to quarantine for 14 days?

This was nothing but a money grab by the NFL.  That’s all they care about.  Player safety, that’s a joke.  The NFL and CBS wanted the Premiere game on Monday Night Primetime.  The Patriots game vs Denver scheduled for next Sunday should be postponed right now!  The Patriots are not practicing today and are already dealing with a short week to prepare for the Broncos.

Lets talk about the game played Monday.  Positives first!  The Patriots Defense is legitimate.  They held the high powered Chiefs to 20 points in their house!  That should be enough to win!  The run defense was terrific especially Adam Butler and Lawrence Guy.   They held Travis Kelce without a catch through nearly three quarters.  The Defensive gameplan installed by Bill Belichick was brilliant.  Through 4 games, this may be the finest coaching job so far of his career.

Damien Harris ran the ball very well (Sony who?).  His 100 yds of offense showed what he can do.  We have heard all pre-season that Harris had been performing well catching and running.  I said before the game that KC was suspect against the run giving up 5.3 YPC last season and the Patriots (#1 rushing team in the NFL) ran for 5.3 YPC and 185 yds (Avg 178 per game coming in).  James White made nice return with 7 catches on 8 targets.  The O line performed very well considering they were starting two 6th round rookies and a street Free Agent that nobody wanted and the Pats plug him in at C, his 2nd career start (curiously both against (KC).  Mike Owenu is playing like a Pro Bowl OG.  He was given a 91.3 rating by Pro Football Focus.  That is the second highest rating given to any O lineman this season.  He had zero QB pressures in 42 pass blocking snaps.  He has been great at run blocking.  Surprisingly nimble for 340 lbs, he pulls very well as evident by the big 41 yard run by Damien Harris.  Owenu led through the hole and destroyed the LB and Harris cut back across the grain and had the big run.  Owenu is the leading rookie overall, by far according to PFF, regardless of position.

Now for the ugly … Stidham and Hoyer were absolutely atrocious.  I was so disappointed in the decisions that Hoyer made especially at the end of the 1st half.  Everyone knows that you can’t take a sack there.  Throw the ball away.  You’re a 12 year veteran.  Then to not know that you had used all your timeouts.  I think Belichick made a serious mistake by not sitting Hoyer after that blunder and start the 2nd half fresh with Stidham.   Many of Hoyer’s passes were high including the INT.  Rizzo was targeted 3 times and had zero catches.  At least two of those passes were not catchable by the TE.

Stidham was worse.  His blatant underthrow to a wide open Damiere Byrd was late.  I am not sure Stidham has the arm strength for the long pass.  Now onto Julian Edelman.  He looks old.  Father time is catching up to him.  His 50% catch rate is very bad.  That pick six went right through his hands, the 2nd time this year.  He could have had the game winning TD in Seattle, but the ball went through his hands.  He is a shell of himself.

The secondary cannot be dropping interceptions, and did it twice on Monday.  I believe that led to 10 points for KC.  The most egregious play of the night was the Interception by Shilique Calhoun.  The replay with sound, clearly shows that Calhoun had the interception and had already broken a tackle before the whistle blows.  Tony Corrente and his crew hid behind the ruling of “in the grasp” when in fact no one blew the whistle to stop play until Calhoun had already broken a tackle.  Corrente knew that call couldn’t be challenged.  Rather they should have ruled it  a fumble or INT and then automatic review takes place.  If they were wrong they could correct the damage.  Here they were wrong and hid behind the rules.  That play was a gamechanger that was denied to the Patriots.  Further there was a unnecessary roughing call on Deitrich Wise going out of bounds with Mahomes.  Mahomes was caught “acting” on another OOB play with Devin McCourty who clearly was holding up.  Mahomes should have received a 15 yd Unsportsmanlike Conduct penalty against him for bad acting and trying to deceive the refs.

The Patriots are exactly where I expected them to be at 2-2.  The silver lining is that they could have won both games.  They have growing pains and that was expected.   However they are far ahead of what I expected … I’m excited to see what the next stretch of 4 games holds.