3 years ago at 10:42 am ET
Follow @IanLogue
Posted Under: Patriots Commentary 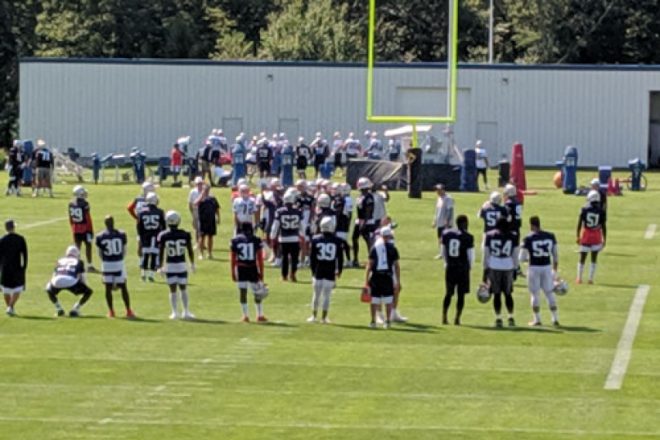 This time of year tends to be the home stretch for players who are trying to enjoy some additional days with their families before the start of football.  Instead, this year may see the coronavirus cause them to cut that short.

After Massachusetts Governor Charlie Baker announced travel restrictions on out-of-state travelers to curb the spread of the virus, there’s a strong possibility many Patriots players will need to return to the state ahead of schedule.

As of July 1st, any travelers arriving into Massachusetts are instructed to self quarantine for 14 days.  That restriction excludes travelers from Rhode Island, New Hampshire, Maine, Connecticut, Vermont, along with New York and New Jersey.

Many players don’t live in Massachusetts once the season ends, with most leaving at the end of the season and only returning during either during voluntary or mandatory sessions prior to the start of camp.

With the pandemic, the rules have been a little different this offseason.  OTAs and minicamps didn’t take place but as it stands currently, the NFL still appears to be full-speed-ahead to begin training camp on time in the coming weeks.  That means players will soon need to turn the page toward preparing for the season.

The bad news is, it may have to happen a couple of weeks early to fall within the quarantine guidelines.  As of now, NFL players aren’t exempted from this requirement, which will instead force them to have to return earlier than they’d probably like.

Given the current state of things around the country, how things play out will be the biggest question.  Most fans are hopeful that the NFL will return and at least provide a much-needed distraction after months of misery, which includes lockdowns, job loss, and other challenges created by the pandemic.  NFL commissioner Roger Goodell has said previously that he’s even hopeful to have fans in the stadium this season, although that seems unlikely.

The other concern has also been whether or not the NFL will be able to finish the season should things not improve.  Massachusetts has done a great job of containing the virus and bending the curve, but unfortunately, they’ve been one of the rare exceptions compared to the rest of the country.

For now, things still appear to be pointing to an NFL season that will be filled with questions as we watch it all unfold.  But in the meantime, players will soon start preparing for a season that all of us hope will provide a little normalcy in what has definitely already been a bizarre year.