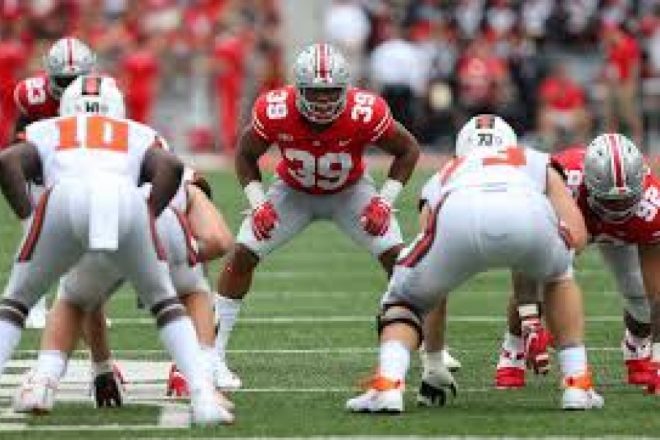 On Monday we wrote about Alabama’s Terrell Lewis, who we feel is a great fit for the Patriots in what they do and how they normally target potential linebackers in the draft process.

So, let’s take a look at another one of the prospects that we feel would be a good fit for the Patriots and vice versa.

Malik Harrison from Ohio State is another one of those long-framed athletic linebackers who will play inside at the next level. He’d be an excellent fit in the Patriots 3-4 scheme as an inside backer. Harrison is versatile enough to be a good strong-side (SAM) backer in a 4-3 look

He’s a very physical, downhill thumper in the running game. Prototypical size of 6’3, 247 who looks the part with a chiseled frame and huge arms. Was a former high school QB with freakish athleticism.

Was considered only so-so in coverage, but improved as a senior and looked solid in coverage at the Senior Bowl with an interception. Growing as a blitzer up the gaps, he anchors well against the run and has great makeup speed.

– Outstanding change of direction, 6.83 in the 3-Cone Drill

Harrison will initially be a backup and depth player for Hightower and Bentley. But as he grows into the system he could see more and more snaps as a rookie.

Yes, in Year 2 he should be competing (and winning) reps as a starting ILB. Then look for him to become a much-more utilized blitzer up the A-gaps

Harrison isn’t the replacement for anyone on the current roster, but look for the Patriots to use him similarly to how they used Kyle Van Noy and Jamie Collins.

He’ll be a frequent and often used coverage player in the kicking game due to his freakish athleticism.

Conclusion:
Our friend from Patriots.com and Patriots Unfiltered Radio, Mike Dussault wrote about Harrison, “With the expectation that the Patriots trade out of the 23rd overall spot, Harrison would be a great first selection in the second round. He has outstanding size and athletic ability and would bring just the kind of hard-nosed play the Patriots love from their linebacker corps. After testing through the roof at the combine, Harrison is a riser on draft boards and would be an ideal foundational player as the defense looks to rebuild their front seven.”

Harrison, playing on a stacked Ohio State defense had excellent production, 75 tackles, 16.5 for a loss, along with 4.5 sacks. Harrison has the versatility to play all of the linebacker spots and has experience as a core special-teamer (a Bill Belichick positive).

Harrison is the classic inside linebacker who can stuff the run; hits like a brick wall and is he’s outstanding at shedding blockers and getting runners while they’re still in the backfield. He’s versatile and can be moved around (a la Van Noy) While he does struggle some when it comes to coverage a bit, what we saw in Mobile may be a harbinger to come. He was slotted to go in Rounds 3-4 but I doubt he lasts into the 4th Round with the way he’s been shooting up different draft boards. If he’s available when the Patriots pick in Round 3, he’d be a great fit.

By: Mark Morse
This week we will analyze the New England Patriots Defensive Backs.  The Defensive Backs are going to make or break the team this year.
3 days ago