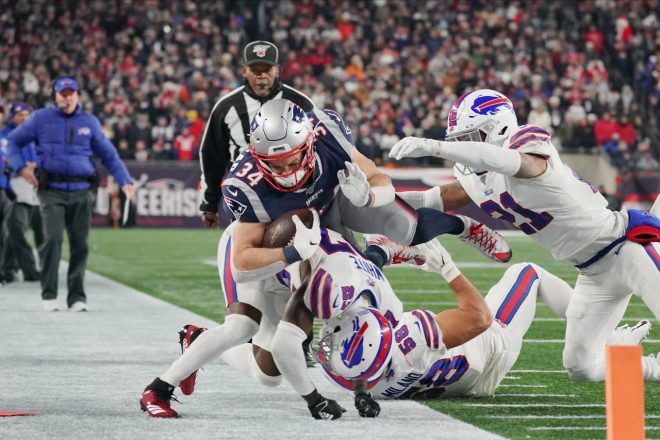 Do you want a playoff atmosphere? You had it in spades today. The Patriots and Bills had a tremendous game with back and forth action and clutch plays by each team. But in the end, the Patriots made a few more plays than Buffalo did and scored 11 unanswered 4th quarter points for a come-from-behind 24-17 victory at Gillette Stadium on Saturday afternoon.

This win gives the Patriots an unprecedented 11th straight division crown. And a win next week assures them of no worse than the #2 seed and a bye in the playoffs. But it wasn’t easy or always pretty. But this is a mentally tough team and they never quit.

Down 17-13 in the 4th quarter, they relied on Tom Brady, Julian Edelman, and Rex Burkhead who must love the cold weather because the past two seasons, he’s turned it up a notch in big games. Today was no exception. Down 17-16, Burkhead had a tremendous effort, breaking a tackle by Lorenzo Alexander in the backfield and keeping his feet and powered into the endzone with 5:06 remaining in the game and giving the Patriots the lead. They capped it off with a two-point conversion from Brady to Edelman to make it 24-17.

Edelman was out for a while, getting checked for a concussion. It happened on a play where Edelman got flagged for offensive pass interference that wiped out a 33-yard touchdown pass from Brady to Ben Watson. We’re not going to get into the call or another on Watson that wiped out a huge first down by James White…

But after an impressive Bills drive got them with a first and goal with just under two minutes to go, the defense stiffened and made some huge stops when they had to. So, when the Patriots got into the locker room they had their hats and t-shirts for the division title, their 11th in a row. The message on the shirt, “The East is Not Enough”, and rightfully so. If they play like this, they can beat anyone.

As we’ve been saying all year, this Buffalo team is tough, with a legit defense and they aren’t going away. They’ll be a tough out during the postseason.

Some of our observations include:

The Patriots offense rolled up over 400 yards of offense against an outstanding defense of the Bills. And they had the balance they always seek with 271 yards through the air and 143 tough yards on the ground. While they struggled in the red zone again, this kind of offensive output has to be a sight for sore eyes.

Tom Brady had his best game in quite a while. He looked spot on today and delivered the ball extremely well. Brady completed 26-33 for 271 yards with a touchdown and no interceptions for a QB rating of 111. Maybe that sand in the hourglass isn’t quite ready to run out just yet? Hmm?

Burkhead, as we mentioned above, had a heckuva game, he carried the ball 5 times for 20 yards and a touchdown and had 4 catches for 77 yards, shaking off an early fumble on the Patriots first possession. We pointed out in our keys that the way to beating the Bills defense was to get the running backs involved in the passing game. So with that…

Josh McDaniels gets a game ball. He called a tremendous game and they kept the Bills defense guessing all game long and they kept the tempo and pace in their own favor. McDaniels has had to be very creative with the offense struggling and he definitely was again today.

Brian Daboll was equally creative for Buffalo. From the tackle eligible touchdown pass play to others, he was able to keep the Bills right on top through the 3rd quarter. This offense is going to get it together…it is easy to see it coming.

Sony Michel had his best game of the season rushing for 96 yards on 21 carries with a 4.9-yard average. He frequently was making yardage after contact and kept his legs moving.

The offensive line was outstanding, getting off the ball to rush for 143 yards on a very tough Bills defense and doing a much, much better job in pass protection allowing Brady to throw from a clean pocket for most of the game.

The Patriots defense played tough when they had to, holding Josh Allen to just 176 yards net passing but gave up two big plays, a 33-yard strike from Allen to Dawson Knox just before the half, and a 53-yard touchdown pass from Allen to John Brown.

Brown beat Stephon Gilmore with a double move but he passed him off inside to Devin McCourty. McCourty got caught peeking in the backfield at the pass rush and under heavy pressure, Allen delivered another strike. Brown scored easily.

Cole Beasley had another big day, catching 7 passes for 108 yards out of the slot. Beasley has a habit of finding the open spots in the coverage and delivering. He’s a tough matchup and going back to the spring, I for one was hoping the Patriots would show some interest in picking him up.

Nick Folk was 3-3 on field goal attempts including a 51-yarder that went right down the middle. It is nice to see the Patriots kicking game getting some traction.

The defense did a great job of limiting Devin Singletary today. He averaged only 3.1 yards per rushing attempt (15 attempts, 46 yards) and just one catch for 2 yards. Meanwhile, Burkhead, White, and Michel combined for 9 catches, 106 yards.

So the Patriots won their 12th game this season, the 12th time they’ve done so since the 1970 merger. They are now tied with the San Francisco 49ers with the most 12 win seasons since the merger.

And the good news is, they are beginning to look playoff ready. With a win over Miami next Sunday in Foxboro, they’ll be 13-3 and getting that all-important bye week off to allow some of their banged-up players to get some much-needed rest.