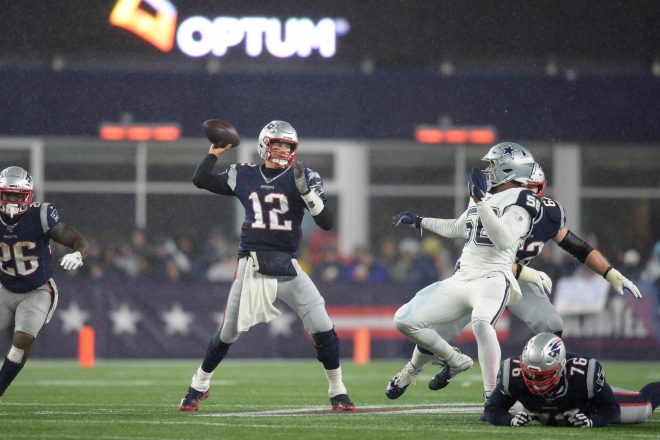 FOXBOROUGH – Tom Brady needs to stop sulking as long as his team continues to win.

Without the retired Rob Gronkowski, with both Mohamed Sanu and Phillip Dorsett injured, with N’Keal Harry and Jakobi Meyers not quite yet ready for prime time, Brady suffered through another substandard offensive performance on Sunday afternoon at Gillette Stadium. Brady was only 17 of 37 passing for 190 yards and rating of 70.8. But instead of pouting like last week, he should be more like MAD Magazine’s iconic cover boy, Alfred E. Neuman and simply say “What, me worry?”

The Patriots have the best defense on the planet, and needed every bit of it to hold off the Dallas Cowboys and their number one offense. In a driving rainstorm, the Patriots shut down Dak Prescott, Ezekiel Elliott and the rest of the gang from Big D, 13-9. A strong wind was blowing left to right the entire game, which affected both the passing game and the kicking game for the entire afternoon. Most of the time, when the elements are a factor, the opponent becomes more beatable for the Patriots, and on Sunday, the game did indeed come down to defenses and special teams, for the most part.

Brady, and not Julian Edelman, threw the one and only touchdown pass of the afternoon, a 10-yard pass to Harry at the end of the first quarter. The rookie out of Arizona State outleaped Byron Jones at the left pylon and came down barely in bounds for the touchdown. It was Harry’s only catch of the game; he was targeted a total of four times and had a drop on a sideline pass late in the first half, though the fact that the ball was wet might have been a factor.

To his credit, Brady was a little bit more talkative at his press conference than he was last week at Philadelphia, but he still looked tired and unhappy with his offense. His 17 of 37 completion percentage (46 percent) was the fifth lowest of his career. Edelman led the Patriots with eight catches for 93 yards, but the other six receivers combined for only nine catches. Brady’s other “old reliable”, James White, had a grand total of -1 all-purpose yards on five yards rushing and minus-six yards receiving.

What did help Brady was Sony Michel and the Patriot rushing attack. Michel finished with 85 yards on 20 carries and a 4.3 per carry average. His 12-yard run on the final offensive possession for the Patriots virtually closed out the win. With left tackle Isaiah Wynn back in action, Michel was able to find lots better holes to run through. This ability to run in the absence of a prolific passing attack enabled the Patriots to stay toe to toe with the Cowboys in the field position battle.

The elements also made field goals more of an important factor in the game. Nick Folk, the most recent replacement for the injured Stephen Gostkowski was two out of four in field goals, making kicks from 44 and 42 yards (both of them into the wind from right to left), while Brett Maher was three of four, missing his first attempt from 46 yards (a doink shot off the left upright) but then making his next three from 46, 27 and 29 yards. All his made field goals were with the wind, while his one miss was against the wind. Both of Folk’s misses were off to the right, but given the weather conditions, it really doesn’t behoove Bill Belichick to once again go shopping for a new kicker.

Maher’s last field goal, with 6:04 left in the game, might go down as something Dallas head coach Jason Garrett might have to explain. Trailing 13-6, the Cowboys were at the Patriot 11 facing fourth down and 7. Fox’s Troy Aikman, himself a former Dallas quarterback. Hall of Famer and three-time Super Bowl champ, strongly advocated for Dallas to go for it on fourth down and not kick. As it turned out, the Cowboys did get the ball back with enough time to try and win the game. But the Cowboys were stopped on fourth down at their own 25, as Amari Cooper, who was covered by Stephon Gilmore the entire game, caught what would have been a first down on a diving catch only to have the catch thrown out on replay because he bobbled the ball as he hit the ground. Gilmore shut out Cooper for the entire game, another key to the Patriot victory.

All game long, it seemed that the Patriots were bent on stopping the Dallas passing attack, and Cooper in particular, allowing Elliott to get his yards and not get burned by Prescott and the pass. Elliott finished with 86 yards rushing on 21 carries and a 4.1 average, which is fantastic given Elliott’s stature among current NFL running backs. Elliott is still a load and one of the toughest running backs in the league, which is no surprise to anyone. But the Patriots were able to contain him well enough to not let him take over the game and still provide enough in the defensive backfield to quash the Cowboy passing attack.

The Patriots will have to travel to Houston next week and get another dose of a running quarterback. DeShawn Watson will provide a similar skill set to Lamar Jackson, but the Patriots will return to the same stadium where they engineered the finest comeback in Super Bowl history. The Patriots historically play well against the Texans, but their only loss to this team was in this stadium in the game where Wes Welker was lost for the playoffs after blowing out his knee. The Patriots seem fully recovered from the shell-shocking loss at Baltimore and might not be as ill-prepared to face Watson as they were Jackson.

After losing the first seven to Dallas going back to 1971, the Patriots have now won the last six games against America’s Former Team. The Patriot defense still reigns supreme, and they will need every bit of it when November becomes December next week.