3 years ago at 8:31 am ET
Follow @SteveB7SFG
Posted Under: 2019 Patriots Regular season 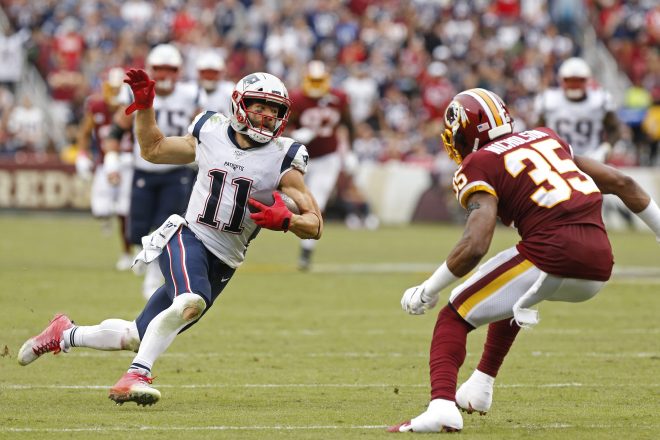 The Patriots are on the road again and are taking on the Philadelphia Eagles after their bye week. The Eagles always seem to give the Patriots a tough matchup and we all remember SB LII which Philly won 41-33.

Don’t be fooled into believing this is a weaker or middle of the road Philadelphia team by their 5-4 record at this point in the season. Many picked them to be one of the teams to fight for the NFC crown this season. To be sure they were very inconsistent earlier this year, but enter winning two games in a row over the Bills and Bears before having their own bye week last Sunday. Both teams have had two weeks to prepare.

Here are our Patriots players to watch this week as they try to improve to 9-1 on the season against the Eagles.

The Patriots wide receiver has played in just two games with his new team but has already exhibited a familiarity and chemistry with Tom Brady that belies how little time he’s had here. He’s had 12 catches in his first contests with New England and he and Julian Edelman should provide a very potent duo that the Patriots can move inside or outside depending on the matchups.

Sanu fulfilled a need for another wide receiver to step up in this offense and the feeling is, that they are just scratching the surface of his potential thus far. We look for Sanu being targeted early and often against an Eagles secondary that has had its issues this season, although they are getting healthy now.

Sanu has already proven to be a great fit for the Patriots offense. Now with the meat of the schedule here, is his chance to show how good he can be. Barring any health concerns, he should be in line for a career-high in receptions. A big game against the Eagles would be a nice way to kick off the second half of the season.

Chung has been limited in practice this week after missing last week’s only two bye-week practices, suffering from heel and chest injuries. Chung is tremendously versatile in the Patriots defense, doing a bit of everything. Bill Belichick has said continuously how valuable Chung has been in his second stint with the team.

Chung is especially needed this week. Philadelphia has two excellent tight ends in Zach Ertz and Dallas Goedert. Ertz is the Eagles go-to guy on 3rd down and covering him will probably fall to Chung, which is no easy task.

Being able to limit Ertz’s effectiveness (notice we didn’t say shut down), will go a long way in giving the Patriots the advantage for the defense in being able to slow down and stop this Eagles team from scoring. Chung, if he’s available will be that guy.

We always seem to put Edelman in there because, after Tom Brady, he’s the most indispensable player on the roster. While the debate can rage across the NFL on whether Edelman is HOF worthy or is he a #1 WR, the fact is, in the Patriots offense, he IS their #1 WR and go-to guy in the passing game.

Edelman has been banged up since the first half of the first Jets game (eight weeks ago) but is as tough as they come in the league. He’s absolutely fearless in going across the middle and doing the dirty work underneath, which is why the Patriots have had so much success in the past few years.

Edelman will continue to be the focal point of the Patriots offense as well as the guy to stop for the Philadelphia defense. It is the matchup within the matchup that makes the game so fascinating.

The Patriots linebacker had an outstanding first eight weeks of the season, worthy of Defensive MVP consideration. Two weeks ago against the Ravens, he wasn’t put in a great position to succeed early in that game and he as well as the rest of the defense was gashed.

While the Eagles use the run/pass option concepts in the running game and have a mobile quarterback of their own (Carson Wentz), it is a pretty different offense than the one the Patriots faced in Baltimore. However, with several excellent running backs and good WRs and TEs, they are no less a formidable task.

We look for Collins to get back on track as being a dominant, disruptive force on the Patriots defense. Look for him to be very aggressive this week as they look to get back to where they had been playing.

This is shaping up to be a game where the Patriots are throwing more than running. Philadelphia’s rush defense is excellent and is 4th best in the NFL. So, with Sony Michel presenting more of a one-dimensional threat at this point of his career, we expect to see more of Burkhead and James White in the backfield this week.

Burkhead gives the Patriots a little bit more of a versatility factor in the offense. While he’s neither a great runner nor a great receiver, he’s very good at both. And they’ll need that versatility to keep the Eagles defense honest and keep them guessing.

Look for his role to increase, similar to what we saw down the stretch last year and in the postseason. If he can stay healthy and on the field, he’ll see a lot more reps, which will hopefully get the running game going a bit more.