The Patriots improved to 8-0 on Sunday with their win over the Browns and here are some thoughts on the victory:

1) It can’t be said enough how much Bill Belichick has meant to this franichise and it was only fitting that his 300th career win came in front of the home crowd at Gillette Stadium who, despite the rain, gave their coach quite the ovation at the end of the game.

The fact it also happened as head coach of the team he earned his first victory against (he got his first win after beating the Patriots as head coach of the Browns back on 9/8/91), along with beating the Browns, his previous head coaching job prior to his arrival in New England, was a nice bit of poetic justice. For anyone who followed Belichick during those days in Cleveland, it’s still a little tough to understand why people felt he did so poorly during his first coaching stint.

But the following season when it was announced that the Browns were suddenly being relocated to Baltimore was when the wheels came off, which had nothing to do with Belichick. During a documentary, Belichick brought to light what a tumultuous period that was for both he and the players and it played a key role in the fact that decision, not Belichick, was the reason things fell apart.

It’s good news for the Patriots, who ultimately ended up being the place he got his second opportunity. Fortunately, we know how things have turned out and seeing him set himself among greats such as George Halas and Don Shula is only fitting. What’s even more incredible is the fact he’s done it during the salary cap era, finishing with a winning season every year he’s been here, while also winning 10 or more games every season going back to 2003. He even did it in 2008 without Tom Brady, after Brady was lost mere minutes into that season.

He’s the best ever and each week is another little notch as he continues etching himself into the record books. But Sunday was a historic milestone that while the weather was far from perfect, the result certainly was as the Patriots remained perfect and won their eight game of the season. 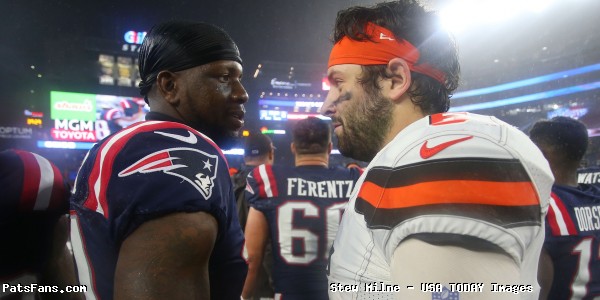 Nice start for Sanu in his debut.

2) The weather likely spoiled a potentially more productive day for newcomer Mohamed Sanu, but what we saw from him Sunday was hopefully a sign of things to come.

Sanu finished the game with two receptions on the afternoon, with his first coming on a 4th-and-4 late in the first half. It was a big play and extended the drive, getting the Patriots down in scoring territory. Unfortunately, the drive eventually stalled and Mike Nugent’s field goal was blocked, but it doesn’t change the fact that he appears like he’ll be a good fit in this offense.

The big thing that stood out was the energy and intensity he played with, which was a stark contrast from Josh Gordon, who looked pretty tired and worn down during his final outings. Sanu took some big shots on Sunday but popped right back up and got back in the huddle and was also spotted doing a good job blocking on run plays and overall played pretty well.

He was targeted 5 times and while he only had two receptions, the rain played a part in a couple of those missed connections. But if initial impressions are any indication, it should be fun to see his contributions in the coming weeks now that he’s part of this offense. 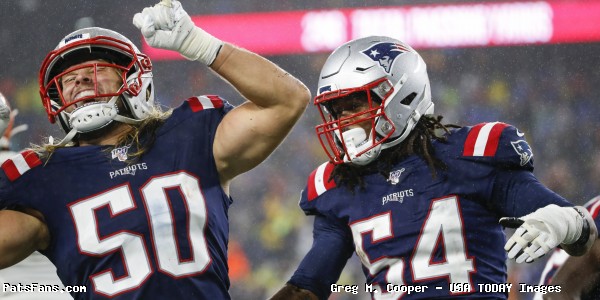 The defense was big again on Sunday.

3) Sunday was another unbelievable day for the defense, which set the tone early.

The Patriots got their first touchdown of the day off of a fumble by running back Nick Chubb, with Dont’a Hightower scooping it up in stride and taking off 26-yards into the end zone to give New England a 10-0 advantage, but the most impressive play came on Cleveland’s next snap from scrimmage.

After Chubb broke off a 44-yard run down to the Patriots 16, Jonathan Jones, who initially fell down, got back up and sprinted the length of the field and came in and punched the football out, with Devin McCourty falling on the football at the New England 4-yard line. That was big, because had the Browns gotten into the end zone they would have been back in the game and it could have changed the momentum.

Instead, Jones’ effort fired up his group, who came after Baker Mayfield on the Browns’ first play of their ensuing drive and Lawrence Guy stepped in front of a short pass from Mayfield to Jarvis Landry, intercepting the pass and giving the Patriots the football at the Browns’ 11-yard line. Two plays later, Brady hit Edelman for an 8-yard touchdown and the Patriots were in command at 17-0.

It wasn’t perfect, as the Browns did have a fairly decent day running the football, with Chubb finishing with 131-yards on the day. However, considering the Browns were probably the most talented offense they’ve faced, New England held them to 3-of-12 (25%) on third down and just 13 points, making key plays when they needed to.

They still lead the league in points-per-game allowed (7.6) and Guy’s interception gave them 19 picks for the season, an NFL best. They also lead the league with 31-sacks after taking Mayfield down 5 times on Sunday.

Overall, it was a solid day’s work against a pretty good offense. The big test now is up next as the Patriots start getting ready for the Ravens, who are second in the NFL in yards-per-game and second in the league in points-per-game behind New England. They also lead the NFL in average time of possession.

4) Sunday’s game highlighted a solid afternoon for running back Sony Michel, who had a pretty good performance against the Browns’ defense.

He finished Sunday’s contest carrying 21 times for 74-yards, averaging 3.5 yards per game. But the thing that stood out was the fact Michel did a better job accelerating
and darting through openings against Cleveland’s defense, which gave us glimpses of the player we saw quite a bit last season.

And it’s not like the Browns defense wasn’t tough. They stopped Michel and Burkhead for either a loss or no gain seven times on Sunday, as well as another for a loss by Edelman. But the fact Michel was able to do what he did in those conditions was big as it kept Cleveland off balance just enough for Brady to throw for over 250-yards in driving rain.

A lot of the credit obviously goes to the guys up front, as they appear to be making progress. But this is the time of year where you need to see that improvement and hopefully Sunday is a sign of things to come. 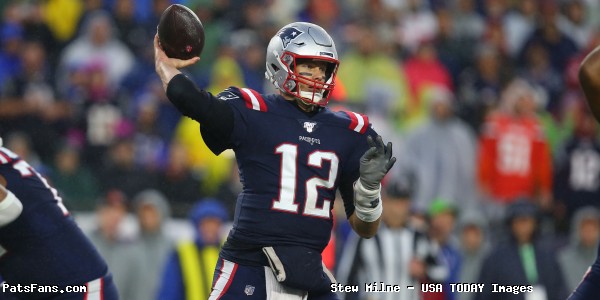 5) Speaking of Brady, give him credit for the way he orchestrated the offense on Sunday, with the veteran making a couple of key plays in big moments.

One of the first was a perfectly thrown 33-yard pass to Phillip Dorsett on their second drive of the game, putting New England in business in Browns territory. It eventually led to a 20-yard field goal by Mike Nugent to give them an early 3-0 lead.

His next big play came on 2nd-and-7 from the Browns’ 8-yard line following Guy’s interception. Facing pressure, Brady rolled right and threw a perfect strike to Edelman, who caught the ball in stride and slashed into the end zone. That touchdown was Brady’s 12th of the season and also put him in the record books as the most touchdown passes in a season by a 42 year-old quarterback, breaking the previous mark of 11 by Warren Moon in 1998.

His throw to Sanu on the 4th-and-4 play was also terrific, firing a strike between the numbers as Sanu caught it with defenders bearing down on him and he turned just quickly enough to reach the first down marker.

Given the conditions, it was a terrific showing against a pretty good football team and Brady did a good job against a Browns defense that got fairly good pressure on him.

With a trip to Baltimore up next Sunday night, this will potentially be their biggest test of the season thus far.

Expect this one to be tough, as the Ravens are also coming off a bye and have had extra time to start preparing for this one. To add a little extra to this rivalry, Baltimore wasted no time making things interesting, having added recently released safety Jordan Richards and signing another defensive player in Ufomba Kamalu off New England’s practice squad.

That’s just Ravns head coach John Harbaugh being Harbaugh, likely looking for whatever edge he can find against a team that has always made things tough against him. Whether or not any of it really makes a difference this Sunday remains to be seen.