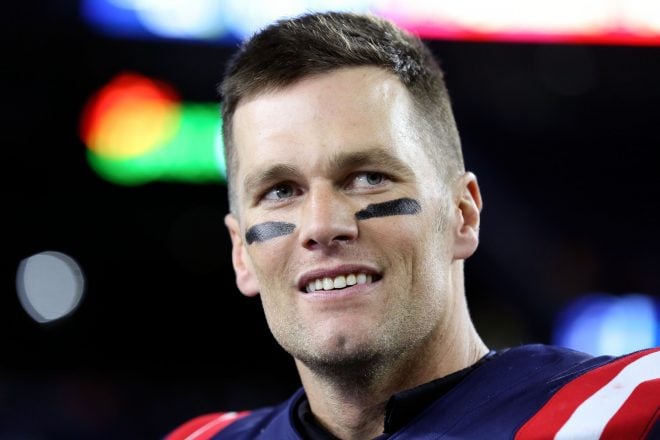 FOXBOROUGH – The Patriots won by three touchdowns, but it sure doesn’t feel like it.

Tom Brady was 31 of 41 passing for 334 yards.  But he threw no touchdown passes, got picked once, got sacked three times, and had a passer rating of only 88.9.  One of the sacks was a strip-sack that went for a defensive touchdown.

Julian Edelman led the Patriots with 113 receiving yards on nine catches.  But he was targeted 15 times, meaning that six plays that went to him misfired.  All other receivers were at or near perfect on targets/catches.

The Patriots opened the third quarter with a 16-play, 60-yard drive that consumed about nine minutes, but came away with no points.

And yet, the Patriots mauled the New York Giants, 35-14 on Thursday night at Gillette Stadium.  Bill Belichick, playing the first of two straight games against his former teams, is now 12-1 on Thursday night football.  The Patriots are now 6-0.  The only other undefeated NFL team has Jimmy Garoppolo as their quarterback.

Put this win again on the defense.  Special teams too, but mostly the defense.  Rookie quarterback Daniel Jones threw three interceptions.  The defense forced a fumble and returned it for a touchdown.  The Giants were held to 213 total yards, were only 2 of 10 on third downs, and had only 10 first downs for the entire game.

Yet the game was 14-14 until late in the first half, and the Patriots seemed totally out of sync on both sides of the ball.  They led, 14-0, but then surrendered two Giant touchdowns in 87 seconds in the second quarter.  What should have been a Patriot blowout was looking more like another Pats-Giants Super Bowl.  Instead of Justin Tuck and Jason Pierre-Paul, you had Janoris Jenkins and David Mayo.  This game strongly resembled last week’s win at Washington; start slow, the underdog opponent hangs around too long, but then the scoreboard says “blowout” at game’s end.

Brady’s numbers belie the difficult evening he had most all game long.  He again was on the run more than he would like, and doesn’t look comfortable out there most of the time.  Perhaps the most ironic stat of the game was that Brady did get two touchdowns, but both of them were one-yard sneaks.  It marked the first time since 2011 that he had two rushing touchdowns in a game.  But he also threw still another interception; in trying to hit Edelman on a deep post pattern, he threw the ball outside instead of inside and Jenkins made the interception.

Still, the Patriots were able to stifle the Giants on both defense and special teams.  The first Patriot touchdown was scored on a first quarter blocked punt, as Brandon Bolden rushed in to block a Riley Dixon punt, and rookie linebacker Chase Winovich picked up the ball and ran it in six yards for a touchdown.  In the fourth quarter, Jones tried to hit Jon Hilliman in the right flat with a screen pass.  Hilliman was clobbered by Jamie Collins and fumbled the ball.  Kyle Van Noy picked it up and rambled 22 yards for a touchdown, diving for the pylon for the score which had to be granted on replay after the officials marked him out of bounds at the Giant 2.

Jones finished 15 of 31 passing for 161 yards, one touchdown, three picks, and a 35.2 passer rating.  Belichick once again showed how well he coaches against rookie quarterbacks.  Jones’ lone touchdown was on a 64-yard bomb to Golden Tate in the second quarter, a juggling catch despite good coverage by Jonathan Jones along the right sideline.  Tate took off for the end zone and shook off a tackle by Duron Harmon on his way to the house.

Tate led the Giants with six catches for 102 yards, but take away the 64-yard bomb and he had only 38 yards otherwise.  That still beats Darius Slayton’s 32 yards which was second best.  With Saquon Barkley still on the shelf, Hilliman led the Giants with only 38 yards rushing on 11 carries.  The turnovers helped, but these numbers still fall on the great play of the defense, albeit against a depleted Giant offensive unit which is only somewhat better with Barkley in there.

Sony Michel led the Patriots with 86 yards rushing, but most of that yardage was against a tired second half Giant defense.  The Patriots did manage 114 yards rushing as a team, with Bolden picking up some of the slack thanks to Rex Burkhead being an injury scratch.  Bolden had the other offensive touchdown, a one-yard rush early in the second quarter.

Twice the Patriots went for it on fourth down, and twice they were denied.  Two reasons for this were the wind, which was blowing north to south all game long, and the fact that Belichick obviously does not trust Mike Nugent, the replacement for the injured Stephen Gostkowski.  Nugent attempted one field goal, a 40-yard attempt into the wind in the third quarter at the end of the aforementioned 16-play drive.  From the right hashmark angled to the left, the ball sailed left and doinked off the left upright.  Holder Jake Bailey failed to get the laces in the right direction which contributed to the errant kick, but that won’t make Belichick feel any better or any more secure with his placekicking game right now.

The Patriots get a week and a half break before another match with the Jets a week from Sunday.  Sam Darnold, who has been bedridden with mononucleosis, might actually play in that game.  Two straight games against New York teams for Belichick will always get the coach’s attention, so the Patriots won’t go into this game unprepared.

Belichick gets emotional when he reminisces about his days as Giants defensive coordinator under Bill Parcells.  He credits that time with learning the game, learning the coaching element, and his love for the Mara family and giving him the chance to become the coach he is today.  But the Giants hung two heartbreaking Super Bowl losses on the Patriots, and of course, Belichick still hates the Jets with a passion.  7-0 will be terrific, but Belichick will be very dialed in over the next ten days.

So, as the Yankees continue their march towards the World Series, the New York football teams still look far inferior to the Super Bowl Champs.  Patriot Nation will take that, for sure.

By: Mark Morse
Shame that such a strong effort ends up with the Patriots coming up short.
13 mins ago